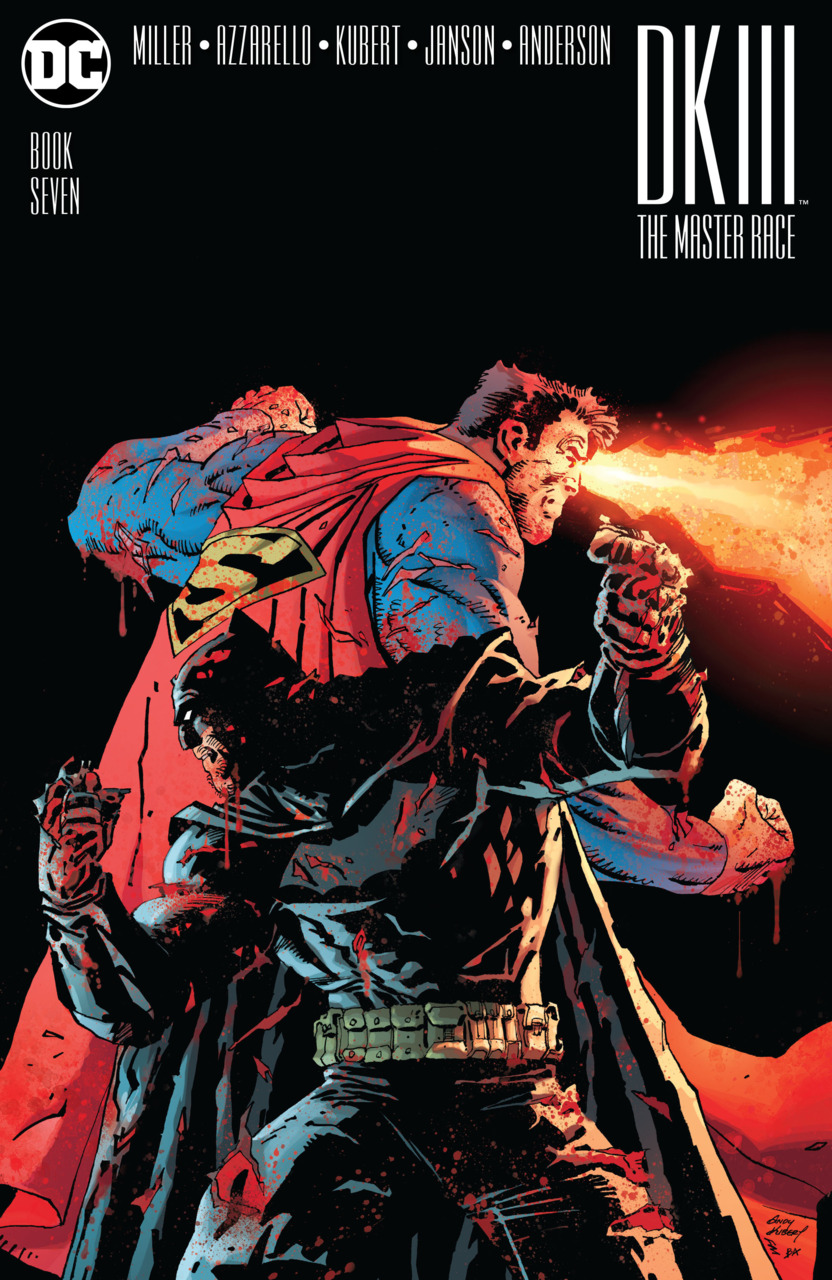 To employ a tired, terribly overused analogy, 2016 has been a mixed bag of nuts.  Sitting here at the end of the year, looking back at everything that has happened the past twelve months, I can’t help but draw comparisons between the year that was and the latest installment of The Dark Knight III: The Master Race. Bear with me, I’m hoping this will makes sense by the time we get to the end.  Let’s get on with it.

The award for “Most Uneven Comic” without a doubt would go to DK3.  This book has run the gamut of being borderline terrible, to readable to almost good, then back to terrible.  This has occurred over the course of several issues and, sometimes, within a single issue.  I’m happy to say that this issue is a complete turnaround from the drudge that was the last issue.  In the downtime after the battle of Gotham, our heroes find themselves embroiled in their own tasks.  Superman has it in his mind to save Batman’s life after his assassination at the close of the last issue by depositing him in a Lazarus Pit.  While this seems the obvious thing to do, it seems dramatically out of place with the rest of the Dark Knight stories and a little too much a deus ex machina.  Carrie Kelley and Ellen Yindel find themselves mourning the apparent loss of Batman in different ways.  The Atom is working on something science-y.  There’s a strange man in the desert looking to redeem himself.  Oh, yeah, and the villains of the piece are regrouping for another full-on attack, this time directly against Superman, but taking his newborn son from Paradise Island.

The story beats land where they need to and the dialogue, for the most part, is delightfully un-hammy.  Quar is still moustache-twirly, but his page-time is so short I’m not bothered by it.  Whereas last issue was a mess of action, this issue transitions smoothly between scenes and takes the reader on a simple journey.  The characters all feel real and fully dimensional thanks to Azzarello’s writing.  I’m still not a fan of the political commentary, however brief it is, since the politicians being aped are all caricatures already.  It’s low hanging fruit, and I’d like to think the creative team is above it.  I suppose it’s really not a Dark Knight book without it, though.  Speaking of being a Dark Knight book, I’m really ready for Andy Kubert to stop mimicking Frank Miller’s artistic style.  He’s better than that, and I’d like to see his own take on the characters.

The highlight of this issue is the interaction between Carrie Kelley and Commissioner Yindel.  Their discussion on the nature of heroism and its effects merits a much larger discussion.  I’m curious which of the creators is the driving force between those ideals, as they feel the most genuine of anything said throughout this series.  A honest point in a wide expanse of mediocre story.

Honorable mention goes to Lara, who could be one of the most interesting characters in this story, but hasn’t done much besides being petulant.  I’m a sucker for “child of two world” stories.  She’s already broken bad in this story, will she get pushed to the point she breaks good?  She seemingly stood up to Quar very briefly, so I’m curious to see where her arc takes her.  It looks like we’re in for another battle next issue with the Kryptonian forces taking on the Amazons.  See what they did there?

Just like this past year, we’ve gone through a lot of crap in DK3 so far.  I, for one, am not letting all that baggage drag me down into the new year.  I’m looking forward to the close of this series again, no longer just to have it be over, but because I’m excited to see what it brings.  Just like 2017, I’m hoping for the best with DK3.  Happy New Year, everyone.

P.S.  I normally gloss over the backup stories, as they have for the most part been not worth the time.  This installment, however, brings back a familiar face I wasn’t expecting.  The details surrounding his disappearance and return aren’t the best, but he’s a welcome addition to the cast and his involvement with the close of the series will be interesting to see.