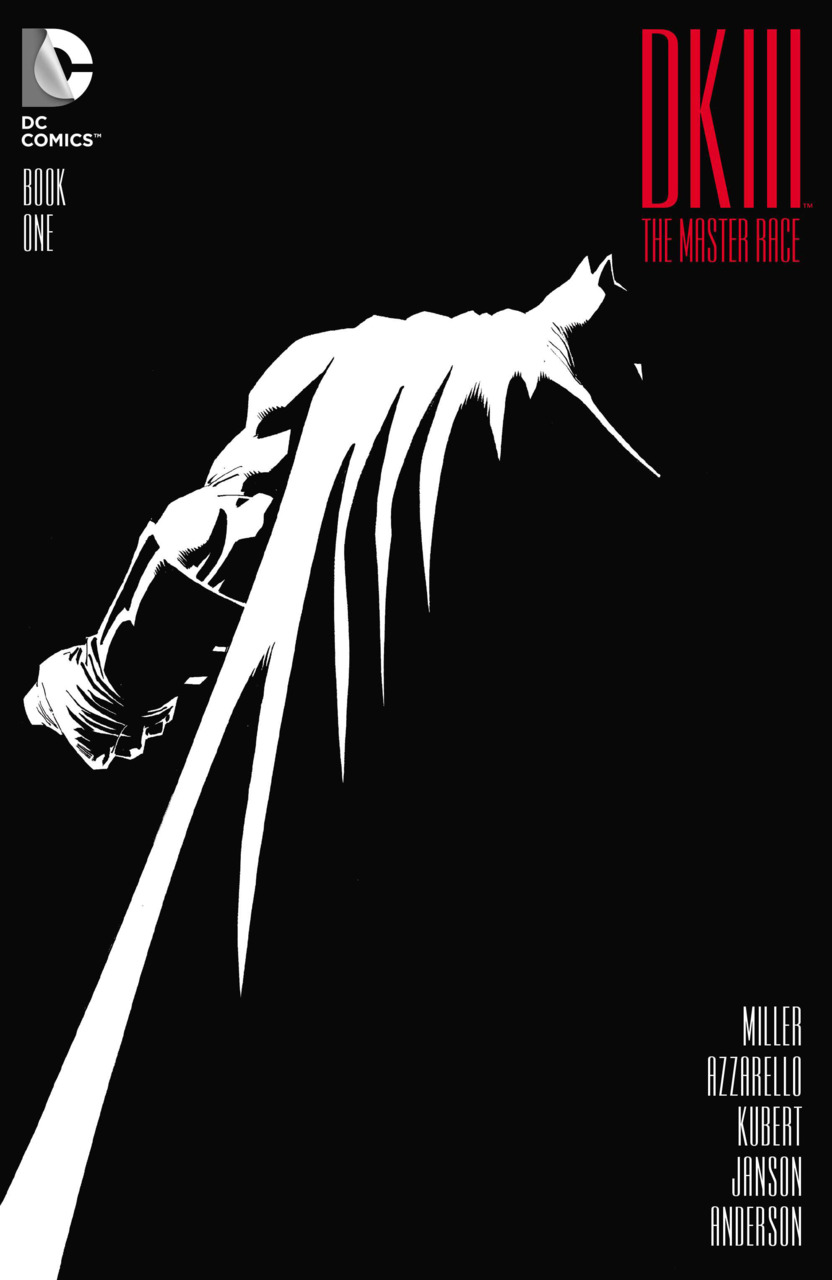 THE PLOT: The Batman has returned and is caught on film attacking and brutalizing police. Wonder Woman returns to Themyscira to learn that her daughter Lara has flown off to the Fortress of Solitude seeking her father Superman, who is frozen solid along with the rest of the chamber. Commissioner Yindel finds Batman battling police and manages to cuff and unmask him, which reveals “Batman” to be Carrie Kelley, claiming that Bruce Wayne is dead.

MY THOUGHTS: This story is going to be difficult. It will be difficult to read, difficult to write about, and must have been difficult to create. This is the third creation by Frank Miller with the “Dark Knight” name, and those two elements at this point overshadow everything else. So what if Brian Azzarello is helping with the writing? So what if Andy Kubert is on art? Both are high talented creators, but neither of them rocked the industry and made history like Miller’s Dark Knight Returns. The fact that Miller isn’t making this comic on his own is a good thing considering his recent works in the last decade and a half, but the fact is that for many “Dark Knight III” will be worth checking out mainly to see what he comes up with next.

The Dark Knight Returns is history. Thirty years old in 2016, it’s a comic no fan of the medium hasn’t at least paid a cursory glance at, and for Batman fans in particular (too many for some), it’s the Bible of Batman comics. It shapes everything about the character seen in the books today, for good and bad. It helped shaped an entire decade of comics in the 1990s during the era of Image. To go back to it a third time after a critically unsuccessful sequel in 2001 seems like a pointless exercise. Why return to a world everyone enjoyed reading when nothing similar has come from it since? Adding to the fact that Frank Miller is a classic example of a fall-from-grace artist, and my personal interpretation of this story’s existence is that DC Entertainment must be hard up for sales to put this together. Oh sure, Dan Didio and Jim Lee can talk about story integrity all they like, but there’s no true audience for this aside from themselves. New, young fans won’t know what to make of this until they read Dark Knight Returns, and older fans know what to expect from Miller these days. Bottom line, despite DKR’s legacy, there’s a lot of baggage DKIII is going up against.

So how does this first issue fare?

It’s not bad. It’s not brilliant, but nothing horrible or insane happens. We see Gotham City, decidedly less 80s/post-futurist than the previous two DK books. We see Superman frozen in the artic. We see Wonder Woman. We see that Yindel is still the chief of Police. We see Carrie Kelley. There’s no real story to get excited about. Carrie’s dressed as Batman and fighting police, which is the one thing that must be from the mind of Miller. In every major Batman story he’s written he has the Dark Knight battle the cops. This story takes a decidedly more socially relevant angle in that Batman is stopping police who were about to gun down a fleeing black man. It’s slightly more resonant than the usual fare of the cops just being blankly corrupt as it infers racial bias, which is something Miller’s touched on before but hasn’t dealt with in a long time. I actually missed that that’s what was happening and just took it as another Batman vs. Police scene for which I didn’t think Miller felt the need for much context. I also wonder if that was an idea by him or Azzarello. Still, the story doesn’t get into much beyond that. It begins and ends the issue with no information other than it was Carrie Kelley all along, which still doesn’t tell us anything.

The scene with Wonder Woman was pretty good, carried mainly by Kubert’s artwork. Pairing him up with Klaus Janson was a good fit for achieving the type of Miller-esque feel while looking both new and classic at once. That and the Superman/Lara scene felt like build-ups to a larger story, which goes against DKR and DKSA. Each issue in those books told stories which were part of an ongoing arc, but provided enough content to feel important. This first issue has a serious case of being a “Part 1 of…” in which nothing gets you pumped to read the next story. I don’t know if Miller’s ideas are being filtered through editorial and Azzarello but while the book is thus far inoffensive it’s also not bringing anything interesting to the table either.

So little meat for a first issue requires so few words, and that’s frankly all there is to say about this. The only reason to read the next issue is to see if the story starts then and there. Again, this isn’t a bad story but it’s not good and unworthy of the names attached to it. I am not personally fond of Dark Knight Strikes Again but at least that had its own style and personality to it. And The Dark Knight Returns #1 is a timeless classic that can be read on its own without reading the rest of the story. This issue isn’t bad tasting, but it’s still watered down, which doesn’t taste good all the same.