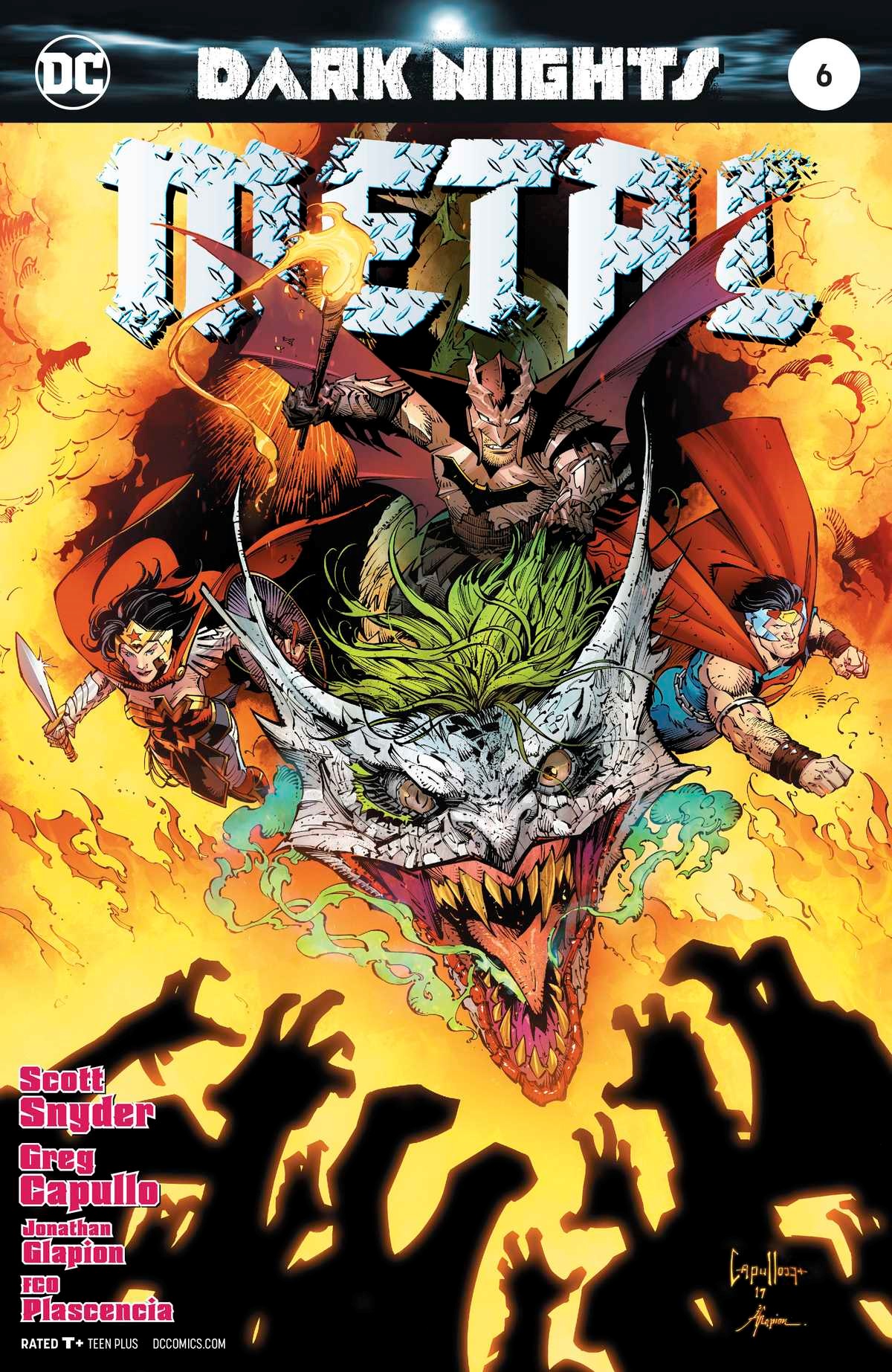 Overview: Members of the Justice League overcome differences with former adversaries, become godlike, and break the multiverse as we know it.

Synopsis (spoilers ahead): Diana keeps clanging her bracelets together as a call to the League. They can’t hear her, though. Kendra tells her to use the mace. Her bracelets are eighth metal, but the mace is ninth. Diana does so and the League members wake up, including Plastic Man, who deals some damage of his own. Diana plans to use Carter Hall’s mace to deal with Barbatos, but Plastic Man tells her of a much stronger signal he was getting from the darkness below. Both she and Kendra make their way that direction as Kendra convinces Diana that she should go into the darkness. Kendra herself has too much darkness in her, and she wouldn’t make it. Diana finds the location just as Barbatos’ dragon finds Kendra. He’s about to destroy her, but she calls out his name, Carter. This gives him pause, as he starts to recognize her. Barbatos disrupts the reunion, putting Carter Hall down for the count, but is interrupted himself by Raven, Cyborg, Flash, Bobo, along with various Batmen(Batmans?) from different worlds, including; Dark Knight, Red Rain, Red Son, and Gaslight.

Diana sees Carter still alive despite being in the depths of darkness and realizes that Clark and Bruce are still alive. She plunges into the pit while Barbatos, along with his horde, begin to overpower the rest of the League. Just when hope seems to have been lost, Wonder Woman, Superman, and Batman all emerge from the Forge armed with the rarest of all metals; Tenth. Cyborg tells them they need to cover Barbatos’ tuning fork with the tenth metal to bring it from the darkness. Batman punches a Joker dragon in the face and begins to ride it to the summit of Challengers’ Mountain. He also covers Aquaman and Lantern with the tenth metal, and they gain the upper hand in battle. Batman calls for the other heroes to help everyone they can. And they begin to turn back to normal. Barbatos opens his mouth to let out the shriek that will end the world. Before he can let it out, Hawkman strikes him with his hammer. Barbatos cries out for his favorite Knight to enact their final plan, as he and Hawkman fight.

Batman Who Laughs uncovers the prisoner to reveal the Over-Monitor. His plan is to create an explosion using the Over-Monitor as positive energy, the Anti-Monitor’s astrial brain as negative energy, and himself as the dark energy. After that, there will be no more multiverse…only darkness.

Batman interrupts him before he can set off the bomb. His tenth metal armor is negated inside the cave. It’s just the two of them. The two go at it for a bit until Laughs gets the upper hand by shooting Bruce in the gut. He points the gun at his head and Bruce tells him to shut up and fire already, but he wasn’t talking to Laughs. He was talking to Joker. Joker fires and shoots Laughs in the back. The two team up, and they are able to gain the advantage over him. He begins to laugh as he realizes he’s loosing. The Joker pins him down as the cave begins to collapse. Batman grabs the Over-Monitor and runs outside the cave.

Meanwhile, the League is overpowering the last of the Knights, but Barbatos has worn Hawkman down. He takes his hammer and prepares to deliver the final blow when Diana tosses Kendra a tenth metal clawed gauntlet. Kendra flies full speed through Barbatos’ chest and he collapses with a large hole in his middle. The tuning fork has been destroyed, but they can’t bring the Earth out of the darkness without it. However, the Over-Monitor has another idea. There has never been so much tenth metal on the Earth before, but there are trace amounts in every living person. If they conduct through everyone, they can raise the Earth themselves. They do. In fact, they raise the Earth out of the darkness and beyond. They rupture through the Source Wall, breaking the Fifty-Two universe system.

The epilogue shows us Bruce expanding the Justice League and relocating their base to the Hall of Justice, Hawkman going into a comma after scribbling words in his journal that setup later storylines, as well as new heroes that were unleashed in the aftermath of the events that took place, additional League-like teams being formed, and Barbatos being chained to the bottom of the Dark Multiverse while they await the return of the Forger of Worlds to return.

Analysis: Scott Snyder delivers an epic finale to the metal saga. The moments granted to Wonder Woman, Kendra finally being true to who she is, Batman and Joker teaming up to take out Laughs…this was a well-done event. Usually, event type books end up being not all that great and a waste of time. This is an excellent example of how to do one right. It was entertaining, it shook up the universe in a meaningful way, and it had an ending. Joker showing up at the end was a bit of a surprise. I guess that does explain why Batman had him in the cave during The Casting, though. The tenth metal was definitely a deus ex machina, but it wasn’t completely out of left field. It does make sense in the context of this story. Although I don’t understand why the alternate reality versions of Batman had to show up. Yeah, it looked cool and I’m sure Capullo loved drawing them for a page or two, but they serve no purpose in the story. That’s my one complaint. Snyder’s vocals in this album have been over the top at times, which is perfect for a true metal song.

Greg Capullo draws the crap out of this book. His fingers had to be bleeding by the end of this story. His designs and concepts are amazing, and his attention to detail is impeccable. The guy always impresses me with all the different camera angles he uses on a page. Always the story-teller. DC, let this man go on vacation. The guy deserves it! Then get him back and put him on another book that will probably stress him out a bit. By the way, of all of his alternate reality Batmen, Gaslight was my favorite. This guy definitely takes the lead guitar and lends some killer guitar solos when warranted; meaning often.

Jonathan Glapion absolutely nails this book. His inks on Capullo’s pencils are like a sweet guitar riff in a metal song. Very detail oriented and consistent throughout. Definitely the backbone of this thrasher. FCO Plascencia’s colors make me weak in the knees. The guy’s work is absolutely stunning. FCO is definitely laying down some solid and vibrant tones on bass. Steve Wands is the steady drumbeat that keeps everything on time wm as it should be. Although I don’t care for his style for Barbatos (some letters are hard to make out), or Laughs (the red letters with black backdrop tend to be hard to read, but it wasn’t as difficult this time around for some reason) but some of his other font choices are spot on and his letter placement is on par with the best.

Final Thoughts: An excellent miniseries that I will revisit again in the future. It also has me excited for No Justice. On a side note; I feel like I had some input for the roster, suggesting to Snyder on Twitter to go with the animated series lineup — primarily adding Hawkgirl and John Stewart (my favorite Lantern). Lesson: don’t doubt the power of suggestion through social media!