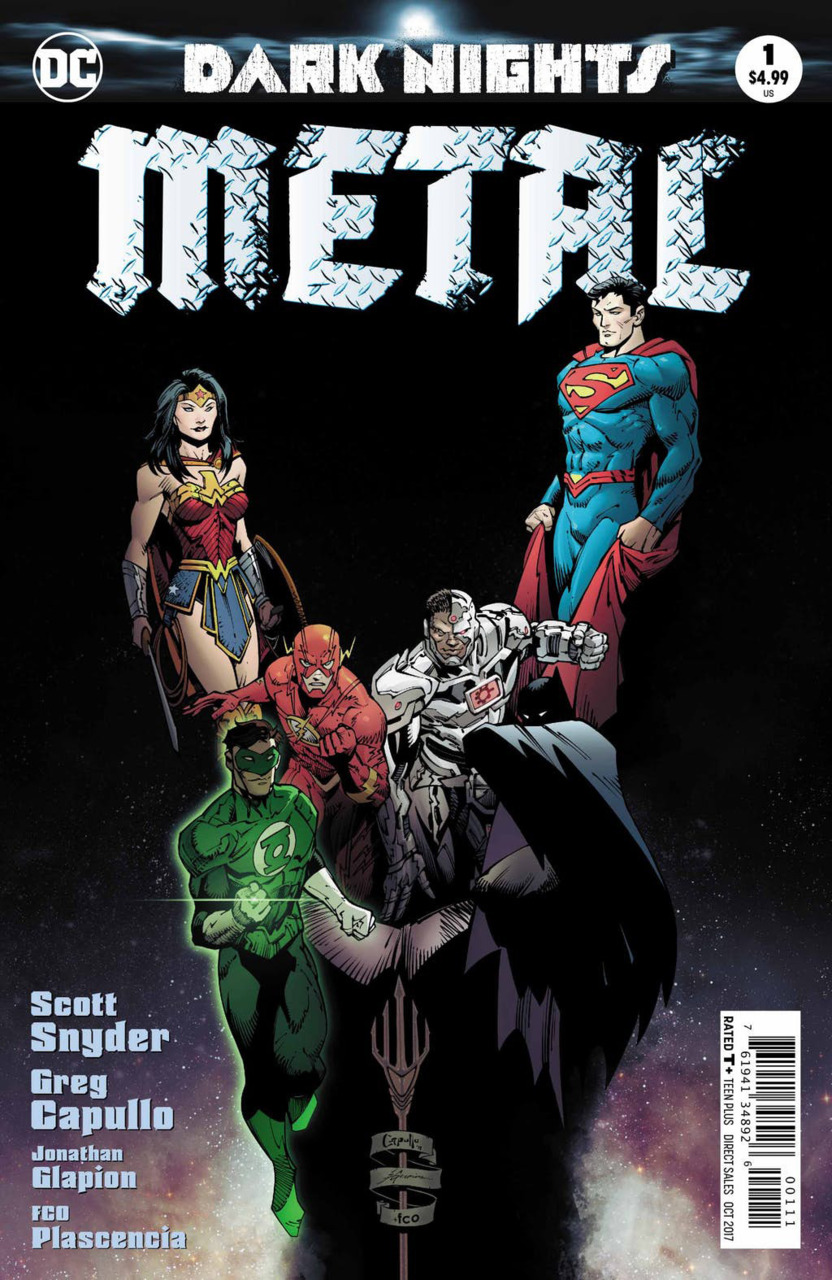 Synopsis (spoilers ahead): Thanks to Mongul, the Justice League are forced into a gladiatorial battle against various alien species on War World. Using different forms of armor, he has infused devices that render the League member’s powers to being non-existent. Red sun dust for Superman, boots that vibrate for Flash, venom for Wonder Woman, a micro black hole for Green Lantern, and glass from the pits of Apokolips for Aquaman. Mongul has captured Hiro, the Toymaster, to build robots to fight each of the League members. They all struggle against fighting them for a while, until Batman discovers that Hiro gave them a clue in what he called the robots — Fulcum Abominus… meaning that there was a secret button placed in the robots’ throats. When the members push that button, they form Voltron… seems that Justice League/Power Rangers crossover is paying of in more ways that one. They then use it to beat Mongul down off panel as we jump forward into the story.

The League are making their way back into Earth’s atmosphere, when Batman receives a call from Alfred. A large storm appeared in Gotham City and dark lightning began to strike. Then a large mountain sprouted from the ground, destroying a good chunk of the city. Superman looks into it, and finds that it is hollow. There’s a bunker inside. Flash races around to find a door and finds it. It has the insignia of a hourglass that is nearly empty. This is Challengers’ Mountain.

Once inside, they find outdated technology that is advance in its design throughout the bunker. Cyborg is getting some weird electromagnetic readings the closer they get to the center… where they find a pod containing five people inside and an inactive Red Tornado off to the side. Green Lantern is getting some strange energy readings as well, and finds a message written in blood that says, “It’s chasing us. Run.” Just then, the League is surrounded by the Blackhawks, led by Lady Blackhawk—Kendra Saunders. She warns them of the coming invasion, and takes them to an island in the South Pacific.

She tells them of the various islands that fall outside of what people would consider normal. Dinosaur Island, Themyscira, Skartaris, Nanda Parbat, and the island they are currently on… Blackhawk Island. She tells the league about Carter Hall, Nth metal, and how they were stabbed with a mysterious dagger and how it put them into a constant cycle of death and rebirth. She goes into detail of how the Nth metal gives people different powers. She talks about the different people Carter had hired — the Blackhawks, T.O. Morrow, the Challengers of the Unknown along with Red Tornado. Kendra shows them Grant Morrison’s multiversal map, and describes a dark multiverse on the other side. She talks of how the Challengers of the Unknown went into the Dark Multiverse, but when they tried to communicate all they heard was screams. They screamed at them to shut the door and to never open it again. She talks of a great beast that lurks in the darkness of the nightmare world. A deity named Barbatos that has been influencing someone in the room from the beginning. Someone to let him into our world. To carry him in on a wagon. The root word of which is Wayne. Lady Blackhawk has her soldiers turn their guns to Batman. They are taking him in. They can’t take a chance on leaving Batman to open that gateway Red Tornado is activated, and begins attacking everyone shouting; “You opened the door!” Everyone realizes that Batman triggered Red Tornado to use as a distraction and get away. Kendra also realizes that the Nth metal is gone.

Batman is riding off on a velociraptor, and asks for a hyper sub. The next place we see him is in the Batcave, studying the piece of Nth metal that he stole from the Blackhawks, but is interrupted by something. Alfred overheard a noise, and Batman goes to investigate. He notices that it’s a strange humming noise. The sound leads him into the study, where he finds a glowing batsignal on the floor. It is easily lifted off to reveal a book — the journal of Carter Hall. Batman has an unexpected visitor, though. One to help guide him through the nightmares that are coming — Dream.

Analysis: Scott Snyder’s script is very tight here. We have an opening scene that adds action to the book, but also sets up the mystery of the metal. The voices Snyder has for each character is amazing, and captures my childhood. This book is heavily influenced by the Justice League cartoon. Barry did sound like Wally, but I liked it. Snyder also did a great job balancing out the all the characters. It’d be tough giving equal representation in a team this big, but Snyder did a great job here. I don’t think I would like the big cosmic story for the regular Batman title, but I am really digging this story as a Justice League story with Batman at the center. It makes me want this team on the main Justice League book… Also, Neil Gaiman’s Sandman appears!

Greg Capullo kills it here, and it was great to see him back on a book. My only complaint is that the opening shot of Batman’s insignia doesn’t match it through the rest of the book. It’s solid black in the intro, and changes to the current look the rest of the time. The way he does action is fun and dynamic. His storytelling is amazing, using imagery throughout that pays off later in the book. His facial expressions and emotional beats are top of the line. Also, his character designs on War World were amazing. I love bearded Aquaman. And the scene where the team was coming into orbit, everyone had on breathers… even Superman. Again, this was a nice callback to the animated series… Because, you know, Superman couldn’t breath in space… which makes more sense, if you ask me.

Johnathan Glapion rejoins Capullo, and does an amazing job here. When he was with the team previously, I felt like his work was a bit too sketchy and unfinished looking. He also struggled with the background. But here, he seemed to have a much smoother hand, and spent a little more time on the background work. FCO Plascencia’s colors are bright and vibrant — popping on every page. The tone difference between night and day looks amazing. Steve Wands blew me away here. His letter placement was on point, which is saying something because there was a lot going on in this issue. His sound effects as well as the chanting looked fantastic… But that font… The font he had for Mongul immediately had the voice actor from the animated series. And then the font for Dream was perfect. Before the reveal, as soon as I saw the text I thought it was Dream… although, I didn’t believe it was Dream until I saw it.

Final Thoughts: This book had the perfect blend of nostalgia, mystery, and adventure all in one. I was engaged in every moment on every page.