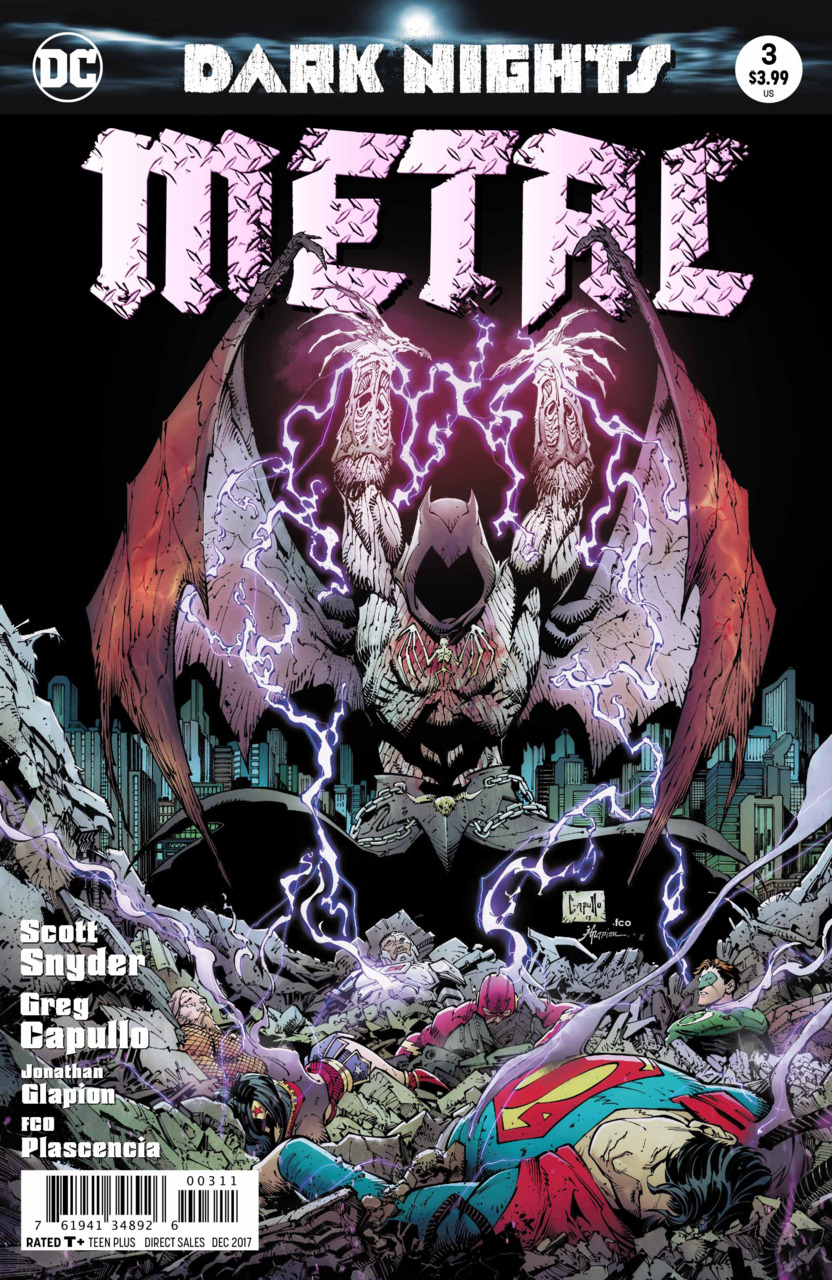 Overview: Superman goes to a place where everybody knows his name, and then he turns into a battery.

Synopsis (spoilers ahead): In Smallville, Damian and Jon are putting on a rock show for their parents, as well as Diana. Jon has a classic white Gibson Les Paul and rocking the 90s grunge look (I swear, Jon is me fifteen years ago, and no – I haven’t grown out of the 90s grunge look). Damian is in all black, leather jacket. The jacket is a bit much for my taste, but it suits him. He’s playing on a solid black Gibson SG. Damian starts playing the classic Batman theme. For those of you music nerds, the guitar is in a “drop B” tuning. He’s only strumming strings 6 and 5… For those of you who don’t know what I’m talking about, imagine Zakk Wylde playing the 60s theme song. If you don’t know who Zakk Wylde is, look him up. I can’t help you any more than that.

Anyway, Bruce comments that this band is going places, and then Clark starts picking the song apart; how it only has three chords… Superman songs are just so much more complex. Lois and Diana start jabbing at the two, making fun of their bickering. Bruce thanks them all and apologizes for the way he acted during that whole mess. Then his chest starts to bleed a bat-signal. Bruce, realizing his situation, says “Carpe Diem” just before Barbatos rips his way out of Bruce’s chest. He mocks Superman, telling him they won, because he let them. The Dark Knights show up, and then Barbatos sucks the power out of Clark and Diana.

Clark wakes up to Diana wrapping her lasso around his arm, telling him to wake up. Clark tells her that he’s been fighting Barbatos countless times. Living multiple lives, but failing every time.

He looks around, realizing they are in Metropolis. Countless bodies are plastered on a monument. Their life force is being drained, fueling the Dark Energy. The ones who aren’t, have been infected. They have all been mutated into Doomsday. He sees Jimmy. Diana tells him that Jon is okay, but Lois is infected.

Clark snaps, and asks where Barbatos is, and then heads straight for Gotham City. He finds the demon, but is met with Devastator’s fist. He crashes onto the ground below, to find the city is covered in a blanket of snow. Clark is confused when the Batman Who Laughs comes forward, because Clark recognizes him as Bruce. The rest of them show up, but only Devastator takes him on. Clark launches him repeatedly, with seemingly no effect. See, these are manifestations of Bruce’s worst fears, and you can’t rid someone’s fears by punching them in the face. Clark wears himself out, but just before Devastator finishes him off, Flash shows up through a portal, and carries Superman back through it.

He finds himself in a bar, Nightmaster’s bar to be more specific. As he looks around he finds Kendra, Diana, Hal, Arthur, Barry, and Bobo a.k.a. – Detective Chimp (MONKEY WATCH 2017!). Kendra explains to Clark that this place is a hidden pocket in between dimensions via magic, and it’s called the Oblivion Bar. Arthur tells him that Doctor Fate, Mister Terrific, and Steel used their connections to Nth metal to create a portal here. Dick shows up and tells Superman that they tried to win back Gotham, but they couldn’t do it. Murder Machine has killer Nano Alfreds. Red Death created a speed force storm over Central City. Clark realized they are creating a circuit to send their world into the abyss. He calls for them to fight, but Nightwing tells him that they’ve already tried. Cyborg went missing, and then he lost the Teen Titians.

Kendra admits that their bringing Clark here has compromised their location. They need to make a decision fast. Green Arrow shows up with a Nth metal arrow tip. He know these seem to do the trick and Robin agrees with Oliver. Mr. Terrific notices that the Plastic Man egg is vibrating in frequencies that seem to indicate a location. He believes it’s sending him coordinates. Three different locations; one in deep space, another beneath Atlantis, and the third at the center of the multiverse. Diana knows that is at the Rock of Eternity. She calls for them to divide up into three teams, each having an Nth metal member on it to protect the others. As Hal and Arthur argue about whether or not this mission will be carried out because the Atlantis location is “not accessible”, another set of coordinates come through, but they are negative. In the darkness. Clark knows this is Batman. He’s trying to communicate with them. He remembers the dream, and recalls what Bruce said in the dream – “Carpe Diem”. It’s a code formed by the Trinity when they needed help.

Dick admits to feeling him reaching out through his dreams as well, but he makes the tough call to stay and fight here. Damian doesn’t take this well, and lashes out at Dick. As he reasons with Damian, one of the cannibal Robins jumps at them, but Deathstroke pinned him to the wall with a sword. He offers to help as long as they pay. He does have a connection to a metal – Promethium.

The place starts to shake; they’ve found them. Clark believes he knows how to find Bruce, and he asks for Flash and Steel’s help. He can’t give up on Bruce. Damian thanks Clark and gives him a hug. They open a portal, and everyone travels through except for Nightmaster, as he looks for a good last fight.

Diana, Kendra, and Fate travel to Kahndaq to the entrance of the Rock of Eternity. Hal, Terrific, and the Plastic Egg head towards Thanagar. While Arthur and Slade make their way to a trench under Atlantis. Meanwhile, Clark, Barry, and John Henry reach the Fortress of Solitude, where they find the Anti-Monitor’s antenna. Batman has been using it to conduct multiversal energy, but currently, it look like it’s about to explode. Clark figures that the Phantom Zone is a possible membrane between our reality and the Dark Multiverse. John absorbs the energy, while Barry redirects the energy as well as powers it up to open the portal, allowing Clark the fly into it. Clark makes it through, and finds an old, frail Bruce. He tells him that he warned him not to come here through his dream. Clark tells him he used the code; “Carpe Diem” – CD – Clark / Diana. However, that wasn’t Bruce. That was Barbatos. He knows the code too, as he’s watched over Bruce this whole time. See, the only way to communicate through the multiverse is through vibrations. Bruce was communicating through the notes in the song Damian played. In a “drop B”, the notes to the Batman theme are three notes; D to C#, and then C, the opposite of the code – meaning Don’t Come. Now they have what they wanted. The ultimate battery – Superman. Now the world will sink into darkness.

Analysis: After my initial read through, I believed this was a good book, but fell short of the others. After thinking it over, dissecting it, and re-reading it, I’ve come to realize this is Scott Snyder creating another work of magic. I know Capullo probably had some influence on the guitar stuff, but as a music guy, the amount of detail that went into that was just amazing. I loved that aspect so much. I loved the Cheers vibe this issue had. I liked the focus on Superman, here. I loved the bonkers moment of having Detective Chimp in a Scott Snyder book. I loved how he was true to Dick’s character without making him feel irresponsible. I loved that Damian hugged Clark. I love that this book is encapsulating Snyder’s anxieties and feelings of writing Batman. I love this book so much, and I’m sad I haven’t gotten to read all the tie-ins. I’ve got a stack sitting her, but becoming a father will do that to you.

Greg Capullo absolutely killed it here. I know it’s killing him to work on such a large team book like this, but he is doing an amazing job. I love the redesigned looks of the characters. Aquaman has looked amazing since this book started – the dude should totally keep the beard. Nightwing had a post-apocalyptic look that made me want to stay up late and read the tie-ins. And Robin looks pretty awesome as well. I haven’t cared much for his Rebirth design, I much prefer the New 52 / DCU look, but this was an interesting look as well.

Jonathan Glapion was so solid throughout this book. There was a panel or two here and there that looked like it wasn’t a Capullo drawing, and that’s from the inks, BUT I’m not saying they looked bad. Some of it might have been for artistic purposes, I’m just saying that it didn’t look like it matched the rest of the book and they are all in the final few pages. It just seemed like it could have been rushed. FCO Plascencia’s colors are so bright and vivid. I love that you can always tell of a scene change without captions telling you so. The guy is masterful as a storyteller, and that’s impressive feat for a colorist. Steve Wands did an amazing job with letters. There were a few times where I looked back later and wondered if the placements were in the right spot, but when I read it the first time, I never hesitated. They all lead my eye masterfully. Barbatos’ dialogue is a bit harder to read this time, and I think it was because of the various colors going on behind it. Now, that still falls on the letterist to make it look work, and it was a bit more difficult here. When I reviewed Red Death, I complained about the Batman Who Laughs dialogue boxes. Now, while they aren’t as difficult to read here, red letters on black background isn’t very easy to read; plus the font doesn’t get the voice right in my head. I read it in Joker’s voice, remember that it’s Bruce (especially when Clark recognizes him as Bruce), and then I read it in Kevin Conroy’s early Bruce Wayne voice; that seems to work the best for me. Think Mask-of-the-Phantasm-party-at-the-beginning-Bruce-Wayne-voice.

Final Thoughts: Metal continues to blow me away with its complexity. Like the music it’s inspired from, it can be mindless, loud, and in your face, but it’s layered and has emotional depth to it that can be peeled back and examined. Also, much like the music, it’s not for everyone. It’s all comic book, and that can be off putting to some.