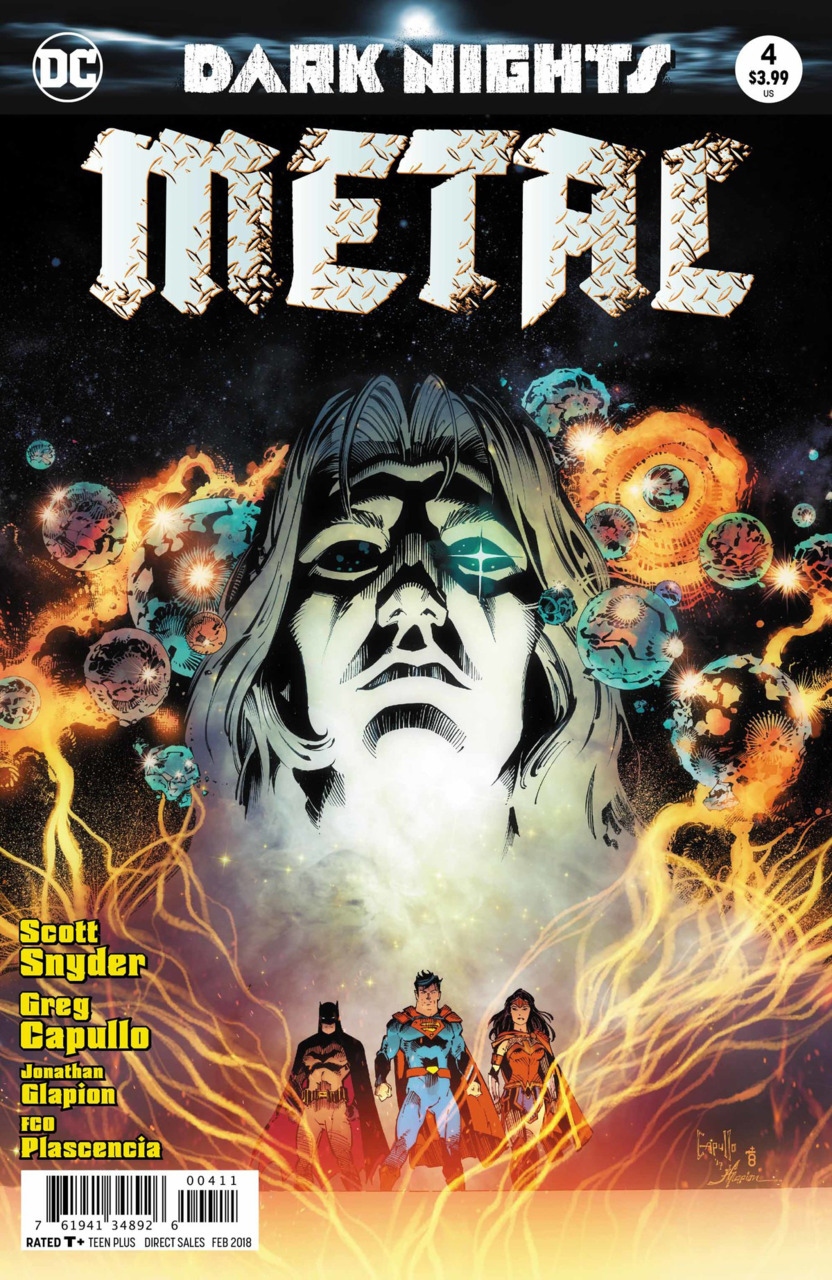 Synopsis (spoilers ahead): We open with Dream recapping what is currently happening; Wonder Woman, Doctor Fate, and Kendra are looking for Carter Hall’s mace near the Rock of Eternity. Aquaman and Deathstroke are headed to Atlantis’ ancient burial grounds to look for hidden Nth metal. Green Lantern and Mr. Terrific are using the vibrations coming from the Plastic egg to search for Nth metal on Thanagar Prime. Flash and Cyborg are making their way through the multiverse in search for help.

Meanwhile, in the Dark Multiverse, many Supermen surround and aged Bruce. These are Nightmare versions of Superman; 1) if he embraced Lex Luther’s ideology, 2) if he killed Bruce and took his mantle as Batman, and 3) if he turned into electric blue Superman; they thank Bruce for luring Clark here to be the battery, and will now shove Bruce into the darkness. His world is sinking into the Dark Multiverse now and they’ll soon be able to take over. Bruce quickly pulls off the gauntlet of the Dark Knight Superman, recognizing it as the “Fire Finger Death Punch” – it has every known form of Kryptonite in it. He threatens to use it, and when the Supermen remind him that it’ll hurt Clark as well, Bruce responds that he’s been trapped here for thirty years. They have no idea what he’ll do. He grabs Clark, and calls for Dream to get them out of there and they vanish before the Nightmare Supermen.

At the Rock of Eternity, Wonder Woman, Doctor Fate, and Kendra fight off the Seven Deadly Sins, who protect the rock. Kendra admits guilt over Carter. She always felt Barbatos calling out to her, but Carter refused to believe that the Dark was evil.

In the outskirts of Atlantis, Aquaman and Deathstroke arrive at the tomb of Atlantis’ first king. Arthur tells Slade that anyone who touches the tomb is banned from Atlantis. Deathstroke breaks the tomb with his sword, and despite Arthur’s anger, the two make their way down the tomb, sensing Nth metal down below.

At Thanagar Prime, Hal, Mr. Terrific, and the egg are making their way to speak to the High Ruler to request for any Nth Metal they can spare; they find him. It’s Onimar Synn (is a demon and villain of Hawkman, for those of you who don’t know), who admits was once an enemy of Thanagar, but has taken control of the planet thanks to the help of Starro. Mr. Terrific informs Synn that if Barbatos takes the Earth, it’ll pull the entire universe it’s in with it, including Thanagar. Synn informs Terrific that they have known about the Dark for eons, and as a precaution, built the Phoenix Cannon. A weapon fueled by super-metals and is always pointed at the Earth’s core. If it’s ever taken over by the Dark, they will just destroy it, so it won’t take everything else with it. When Synn first took the throne, he considered using it immediately, but decided on another purpose for Earth. And now, they have given him the final piece he needed; they capture Green Lantern and Mr. Terrific and take the Plastic egg. Lantern tries to use his ring, but it won’t work. Starro has messed with his brain, so that he doesn’t have the will to even finish a thought.

Bruce and Clark awake to find themselves in the Dreaming, Dream’s home. Superman’s hair has turned white on the sides as a result from being a battery. Bruce is angry that Dream cares so little, that he left him in the Dark for thirty years. Dream tells him that this battle is personal for him. That Barbatos is making the Nightmare stories a reality, and by doing so, burning all the Dreaming with it, and by proxy, all stories. He can’t join them in the fight, but he will give them the most powerful weapon in all of creation… a story.

He tells them of how everything came to be, of matter and anti-matter, and the two brothers who were tasked with monitoring what had been created. But there was a third who had the task of watching over all that had yet to be created. He resides at the World Forge in the Dark Multiverse. He builds worlds from the hopes and fears of living beings. The stable worlds would stay, but the unstable ones had to be destroyed and their energies put back into the Forge to create another world. For this, a Great Dragon (Barbatos) was tasked with the job of destroying these worlds. However, he killed the master, and allowed the worlds that should have been destroyed to continue on. With this, the Forge began to darken. If there is any hope left, it’ll be at the World Forge. Bruce asks if they need to bring Nth metal to the Forge, but Dream explains that Nth metal is only a strain of it. The eighth is used by the gods and can hurt the Dragon and his armies. With them having a cosmic being on their side, it’s tipping the scales in their favor. Time is running out. If the Forge is lost, then so is all hope. Dream can’t go with them, but he can create a gate to let them through. The only way this will work, is if they go through with hope and wonder in their heart. If not, they’ll be lost in the Dark Multiverse forever. Clark is ready, but Bruce lacks the confidence to go. He has no hope in his heart. He doesn’t look for wonder, he looks for answers. He’s a detective. He doesn’t believe he is a good person. Clark helps him realize that he does have hope, it’s just in other people; in his family.

With his newfound confidence, the two go through the portal.

Meanwhile, Diana is trying to radio the other teams, but isn’t getting a response. She’s starting to worry, but she and Fate have their attentions elsewhere when they see Kendra about to throw the brain of the Anti-Monitor through the multiverse’s center and into the Dark Multiverse, destroying it, and possibly everything else. Fate and Diana try to talk her down, because Clark, Bruce, and Carter are all trapped down there. Before Kendra can go through with it, she collapses, and goes through a painful transformation into Lady Blackhawk. Doctor Fate tries to save Kendra, but before he can act, is struck by lighting and vanishes, leaving only his helmet behind. Black Adam tells Diana that there was a disagreement amongst the immortals. He and Vandal Savage knew this plan wouldn’t work, and they made a deal with Barbatos. He demands Wonder Woman hand over the brain of the Anti-Monitor.

Clark and Bruce arrive at the Forge of Worlds to find it has been taken over by the Dark. They were too late. Clark can’t believe that this is how it ends. This sparks something in Bruce’s mind – in Carter’s journal entry, he swore that the Forge was a place of creation, or beginnings. A voice from behind them says, “I was wrong, Bruce Wayne. I am Carter Hall, Dragon of Barbatos, keeper of the Dark Forge. And there are only endings here.”

Analysis: This script was so dense. (By the way, it’s funny that a word can have opposite definitions based on the context of the sentence. English is weird.) Scott Snyder absolutely kills it here. I loved how meta Snyder got at times with Dream. It was very Grant Morrison-like at times and I didn’t know Snyder could write like that. It became a commentary on the story itself, and that’s amazing to me. I can’t think of any medium other than comics where something like this can me done. It also shows how great Snyder can be when he works within the confines of what is given him. Everything dealt with here has been carefully thought out and been very deliberate. The way he’s treated these characters has been very respectful of their history. That’s not to say he hasn’t made some tweaks and changes, but it’s been far and few in between and when he has made the change, it makes sense narratively. I also love the vastness that this story has given the universe. It feels so large and lived in – something that the New 52 really did a disservice to the DC Universe. There is so much yet to be discovered. I also loved the dynamic with Clark and Bruce. Dream puts them into a situation where they had to have hope to get through. While Clark has no problem doing this, this is a serious problem that Bruce has to overcome. He has no hope in his heart. He is driven by fear. Bruce having to overcome his own fear, with the hope and wonder that his family give him was a beautiful moment, and I loved that. Things like this make Bruce more human than we are used to seeing him.

Greg Capullo slays it here. The guy always finds an interesting shot for the camera. I think my favorites of his are always the close-up eye shots with the reflection. He also gets super creative when in the Dreaming. The psychedelic nature of that trip was just a fun one to take. My only complaint is his Wonder Woman looked rushed on one panel somewhere in the middle of the book. Particularly her chest plate, it just didn’t match the angle of her body to me. But I love his character designs. I love how they look worn down. And on top of that, characters like Green Lantern have robes and other clothes on top of their usual looks. I just like the slightly different looks like this over the plain look we come accustomed to.

Jonathan Glapion’s line-work is amazing. He was very clean and smooth throughout. His attention to detail has been great this entire run, and that continues this issue. FCO Plascencia’s colors were beautiful. I love how vibrant his colors can be. He seems to break all the rules that colorists’ have every issue, and yet he finds a way to make it work. I love his page saturation. It’s a subtle way to let the reader know that the scene has changed without outright telling them, and it also makes all those bright colors blend just enough to make it work. Steve Wands does a great job lettering. His letter placement is always on point. I don’t think he’s ever lost me on one of his books. His font choices were fun here as well. Dream’s font and letter boxes were very different from the others, giving him another worldly feeling. The subtle purple border on Lady Blackhawk gives off the vibe that she is possessed, to some degree, by Barbatos. The pink letters for Starro were a nice touch, as that’s a color that tends to be used for telepaths.

Final Thoughts: This was an excellent read, and it got better with each read-through. I had a blast with this book.