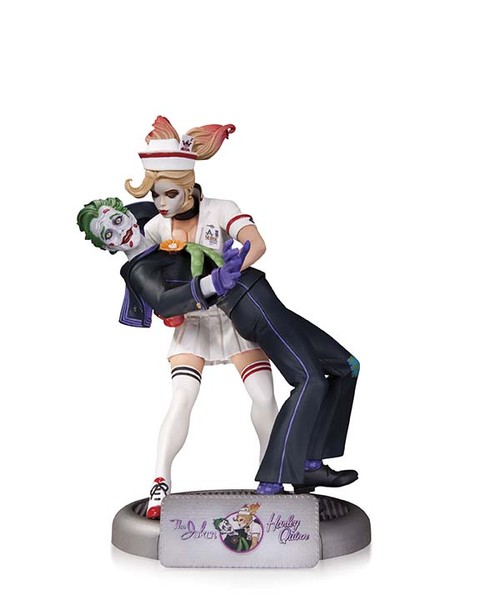 DC Collectibles has released their solicitations for November 2015. Items that might be of interest to TBU fans include a Batman action figure based on the design of Bruce Timm in Justice League: Gods and Monsters for $24.95, a 13 inch statue of James Gordon based on the television show Gotham for$129.95, two statues (of Red Hood and the Arkham Knight) based on the upcoming video game Batman: Arkham Knight for $124.95 each, a new DC Comics Icon action figure of Batman for $24.95, a set of Justice League tarot cards for $29.95, a new statue of the Joker and Harley Quinn from the DC Comics Bombshells line for $249.95, a Batman: Black and White statue of Harley Quinn based on the designs of Paul Dini for $79.95, and some new action figures based on Batman: Arkham Origins villains The Electrocutioner, Dr. Harleen Quinzel, and Lady Shiva for $69.95.

JUSTICE LEAGUE: GODS AND MONSTERS: BATMAN, SUPERMAN AND WONDER WOMAN ACTION FIGURES
The designs from the original animated movie of legendary animator Bruce Timm are brought to life as articulated figures ready for action! Each figure comes with multiple accessories and base!
EACH FIGURE SOLD SEPARATELY
$24.95 US • On Sale September 2015 * Allocations May Occur
1. BATMAN – 6″

JUSTICE LEAGUE TAROT CARDS
ARTWORK BY SARA RICHARD
Reveal secrets and look into the future with this striking tarot card deck featuring stylized illustrations of the Justice League, which comes complete with a velvet bag.
$29.95 US • On Sale November 2015 Allocations May Occur

DC COMICS BOMBSHELLS THE JOKER AND HARLEY QUINN STATUE
DESIGNED BY ANT LUCIA
SCULPTED BY TIM MILLER
The popular Bombshells line continues with this highly detailed statue of Harley Quinn and her mad love, the Clown Prince of Crime, The Joker!
Limited Edition of 5,200
Measures Approximately 10″ Tall
$249.95 US • On Sale November 2015 * Allocations May Occur

BATMAN: BLACK AND WHITE HARLEY QUINN BY PAUL DINI STATUE
DESIGNED BY PAUL DINI
SCULPTED BY STEVE KIWUS
The best-selling BATMAN: BLACK AND WHITE line of statues continues with this finely detailed statue of Arkham’s most adorably insane inmate, Harley Quinn—based on the original design for the character by co-creator Paul Dini!
Limited Edition of 5,200
Measures Approximately 7″ Tall
$79.95 US • On Sale November 2015 * Allocations May Occur