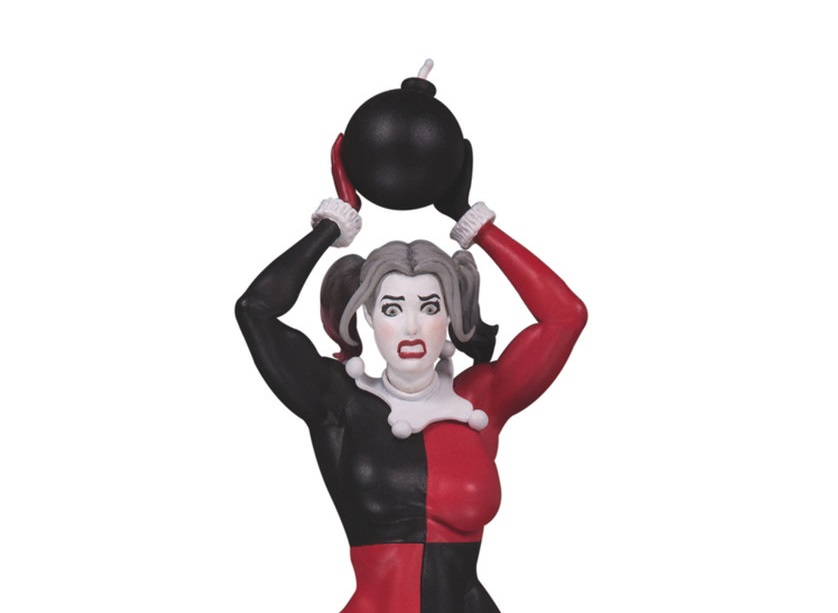 DC Collectibles is churning out even more figures and statues for the die-hard DC collectors, and Bat-Fans are once again treated to an amazing array of things to enjoy. Whether your tastes lean more toward the more recent Dark Knights Metal or more along the lines of the fan-favorite DC Bombshells, there will be something here for everybody. Here are the items that you can expect to hit stores in June 2019. sculpted by ALEJANDRO PERIERA
The DC Gallery collection presents reproductions of some of the most iconic props, costumes and art from across the DC Universe. For the latest release, the team has launched a collection of Batman cowls, each representing a beloved rendition of the Dark Knight’s headgear from comics, film and games.
The first cowl of the series is from the current Rebirth era of the comics. Standing approximately 8.6″ tall, this 1:2 scale bust-style polyresin statue makes for an imposing addition to a home or office, ideal for fans of the Tom King era of the Dark Knight.
Limited to 5,000 pieces
Figure measures 8.5″ tall
Allocations may occur
Final products may differ from images shown
ON SALE MAY 2019
$90.00 US based on the art of GREG CAPULLO
sculpted by NEOBAUHAUS
“My whole life, I had been afraid of doing what I knew needed to be done. Afraid to give all of myself to the battle. The helmet showed me that my codes and rules were naive. That all that truly mattered was victory. And now I would finally take it for myself.”
Rocking into our world from the pages of DARK NIGHTS: METAL comes the bloodthirsty Merciless. A nightmarish fusion of Batman and Ares, this member of the Dark Knights is a supremely powerful warmonger, taking all of the best tactical skills of Batman and pairing them with the might of Ares.
This 8.46″ tall polyresin statue is menacingly detailed based on the art in the miniseries. From the stunning, amplified Ares Bat-helmet that corrupted the Caped Crusader to the chains highlighting the blazing blue armor to the God Killer sword, it will command the room no matter where it stands.
Limited to 5,000 pieces
Individually numbered
Figure measures 8.46″ tall
Allocations may occur
Final products may differ from images shown
ON SALE JUNE 2019
$85.00 US While their love may never fade, The Joker and Harley Quinn are splitting up. Or more accurately, fans can pick up these two DC DESIGNER SERIES: ANT LUCIA figures singly. Designed to evoke the legendary V-J Day photo “The Kiss,” fans can now choose sides between DC’s most infamous crime couple or pair them together.
Harley is decked out in a retro nurse’s outfit, wonderfully reminiscent of the women helping the good fight of the Bombshells era. She comes with two interchangeable heads, so fans can present her smiling or with a kiss head, ready to re-create the iconic embrace.
Harley’s beloved, The Joker, is in throwback sailor’s garb, albeit with a custom twist—touches of green, purple and black. His face may show a bit of bewilderment from the moment, but we’ll leave it to our fans to guess what he’s really thinking about the smooch.
Allocations may occur
Final products may differ from images shown
Approximately 8 units per carton
ON SALE JUNE 2019
$28.00 US
Each figure sold separately
HARLEY QUINN — 6.65″ Tall
THE JOKER — 6.75″ Tall designed by FRANK CHO
sculpted by ALEJANDRO PEREIRA
HARLEY QUINN RED, WHITE & BLACK statues are based on art from the comics industry’s top creators and re-create their vision of the red-hot villain in vivid 3-D detail.
For the latest statue in the line, the team drew inspiration from Frank Cho’s variant cover for HARLEY QUINN #50. One can see a bit of panic in Harley’s eyes as she scrambles to rid herself of the bomb and, in the process, save the ducks adorning her custom nameplate stand. This piece is a great addition to the collection of anyone who loves Harley, old-timey bombs and street-crossing waterfowl.
Limited to 5,000 pieces
Individually numbered
Statue measures 8.5″ tall
Allocations may occur
Final products may differ from image shown
Approximately 6 units per carton
ON SALE JUNE 2019
$80.00 US based on the art of SEAN MURPHY
sculpted by KAREN PALINKO AND ZIGGY HALFPEPPER
What if the greatest villain in Gotham City was not The Joker, but the Batman? That question is at the core of the epic eight-part limited series BATMAN: WHITE KNIGHT, which features the writing and art of Sean Murphy.
This limited-run Batman Black & White statue presents a highly detailed version of Murphy’s Joker, a nuanced, populist hero to the working men and women of Gotham. Trading his suit for streetwear, this Joker—known as Jack Napier in his moments of sanity—fights to end corruption and brutality from the city’s ruling class.
On his own or paired with the Batman Black & White: White Knight Batman, this Joker makes a great addition to any collection.
Limited to 5,000 pieces
Individually numbered
Statue measures 7″ tall
Allocations may occur
Final products may differ from image shown
ON SALE JUNE 2019
$80.00 US