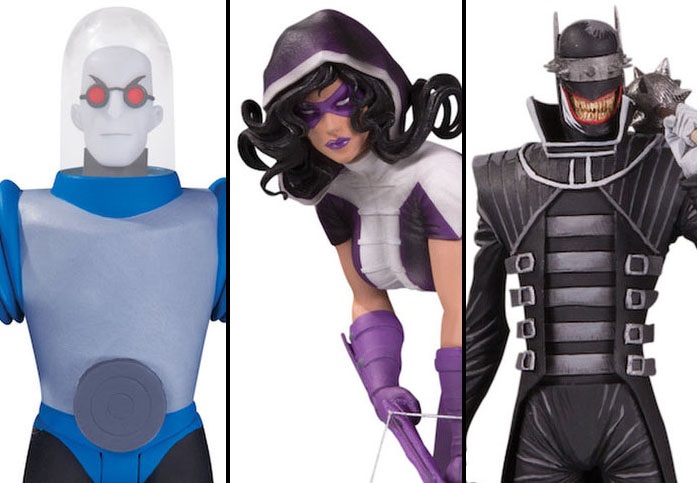 DC Collectibles will be bringing a ton of Batman-related joy to all the lucky Bat-Fans out there very soon.  They have announced a stunning amount of Batman goodies recently, including several new six-inch figures based on Batman: The Animated Series as well as a variety of statues. Full details along with pre-order information can be found below. sculpted by ALEJANDRO PEREIRA
Atop one of Gotham City’s gargoyled rooftops, a duel for the ages is happening between Batman and Deathstroke in this all-new DC Collectibles battle statue. Batman defies gravity as he teeters on the edge of the gargoyle, armed with claws of batarangs, ready to defeat Deathstroke. Sculptor Alejandro Pereira masterfully crafted these figures, while painter Michael Cowart put his artistic touch on these iconic characters to create this dynamic polyresin statue.
• Limited to 5,000 pieces and individually numbered
• Statue measures 11.75″ tall
• Allocations may occur
• Final products may differ from images shown
ON SALE DECEMBER 2019
$350.00 US based on artwork created by GREG CAPULLO
sculpted by JASON FRAILEY
Completing DC Collectibles’ DARK NIGHTS: METAL statue line, the final epic piece features the Batman Who Laughs and Robin minions! Standing tall and imposing, surrounded by his three Robin minions in chains, the Batman Who Laughs is here to haunt your nightmares.
Whether on its own or with the other DARK NIGHTS: METAL statues, this one definitely represents the comic in the most iconic way possible, while paying homage to Greg Capullo’s design of the character.
• Limited to 5,000 pieces and individually numbered
• Statue measures 8.135″ tall
• Allocations may occur
• Final products may differ from images shown
ON SALE DECEMBER 2019
$170.00 US

The villains have broken out of the GCPD Rogues Gallery 5-pack and are now coming to you as individual figures.
46. BANE – 6.89″ Tall
Bane comes with four separate pairs of hands, each featuring a different grip style. You can also have Bane working out with his dumbbell accessory! This Bane figure features a new paint deco, which sets him apart from the original.
47. KILLER CROC – 6.5″ Tall
Killer Croc’s bumpy, crocodile-like skin gives his figure an added 3-D texture, and his articulated torso allows you to pose the figure in a hunched position. Also included are two extra sets of hand and a slight paint deco change.
48. MR. FREEZE – 6.4″ Tall
Mr. Freeze, armed with his freeze gun and three extra sets of hands, is ready to have an epic battle with Batman! This action figure also comes with a slightly new paint deco!
49. POISON IVY – 5.27″ Tall
Poison Ivy comes with an incredible five sets of hands and a new paint deco! She also comes with one of her beloved flowering plants in a decorative pot. Is it poisonous? That is up to you!
• Allocations may occur
• Final products may differ from images shown
ON SALE DECEMBER 2019
$28.00 US • Each figure sold separately designed by JOËLLE JONES
sculpted by JACK MATHEWS
Inspired by the powerful women of the DC Universe, DC Cover Girls is a long-running line that features dynamic depictions of the most famous superheroes and super-villains in premium statues, all based on art from some of the top talent in the comics industry.
Helena Bertinelli, a.k.a. the Huntress, joins the DC Cover Girls line, as designed by Eisner-nominated artist and writer Joëlle Jones. Armed with her crossbow and ready for anything that comes her way, this polyresin piece features the Huntress in her Rebirth-inspired suit.
• Limited to 5,000 pieces and individually numbered
• Statue measures approximately 9″ tall
• Allocations may occur
• Final products may differ from images shown
ON SALE DECEMBER 2019
$125.00 US