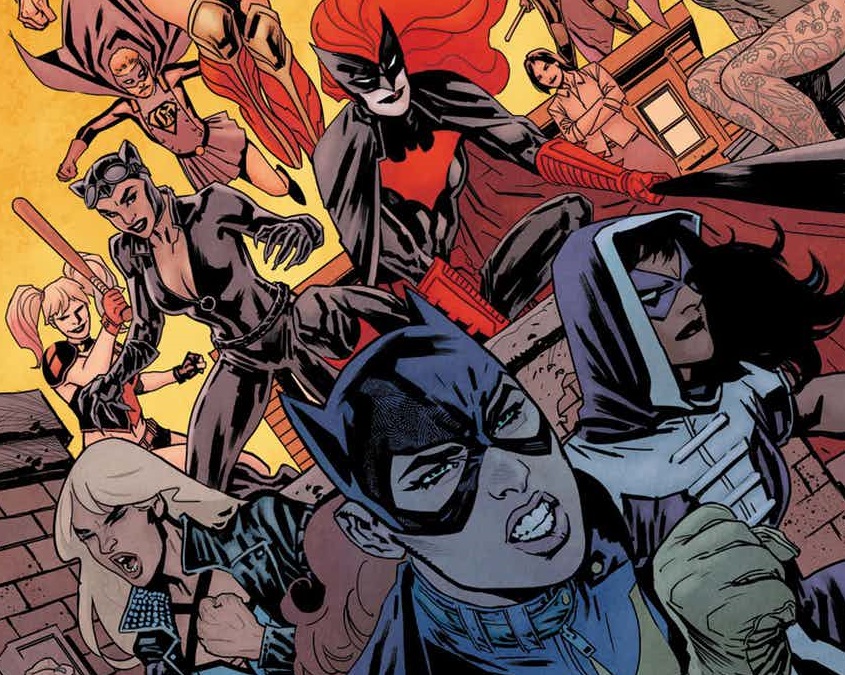 The mysterious involvement of Dr. Manhattan in Rebirth will finally come to light in November as Doomsday Clock #1 hits shelves. Written by Geoff Johns with art by Gary Frank and Brad Anderson, the series will be starting right after the end of the Mr. Oz arc in Action Comics and Tim Drake’s return in Detective Comics. Another big Vertigo name coming to regular DC continuity is Sandman, and the cover for Dark Nights: Metal #4 doesn’t shy away from it. Early solicited, the issue will only be coming out in December. Also getting an advance solicitation is Hawkman: Found, the final Metal tie-in. Coming before it will be “Bats Out of Hell”, the crossover in which the members of the Justice League face their Dark Knights counterparts.

November will also bring a number of annuals to stores. Batman will be getting its second Rebirth annual with Tom King as writer and Lee Weeks as artist. The issue will be focusing on the past of Batman and Catwoman. It will also be time for the second wave titles to get their annuals. Super Sons Annual will be focusing on Jon and Damian’s pets as Krypto and Titus meet for the first time, and Lobo’s recruitment secret will be revealed in Justice League of America Annual. Both will be by their regular writers but with different artists as Paul Pelletier takes over for Jorge Jimenez in Super Sons and horror legend Kelley Jones, takes the JLA.

Regarding the Batman books, as mentioned before Tim Drake will be back to the regular dimension as “Lonely Place of Living” comes to an end with issue #968 of Detective Comics. The arc coming after that will be “Fall of the Batmen” as teased in Batwoman #6. Over in Batman, “Dream of Me” continues with parts two and three. A new Batman book recently announced will also be coming out in November. Batman: Creature of the Night by Kurt Busiek and John Paul Leon is solicited for the last week of November at the cost of $5.99 US, making it the most expensive TBU title of the month.

Batman and The Signal will also be debuting on November, a miniseries focused on Duke Thomas as he takes his new alias and position in the Bat-Family. The series will be written by Scott Snyder and Tony Patrick and illustrated by Cully Hamner. Batman: White Knight will be getting its second issue and Nightwing: The New Order its fourth with a cover that features the Titans version of Kyle Higgins and Trevor McCarthy’s dystopia. Among all of the new titles two are absent from the solicitations list: Mother Panic and Suicide Squad: Black Files.

As for the regular titles, “Summer of Lies” will be coming to an end in Batgirl, and “Dark Destiny” in Trinity. The team titles of DC will all be reaching turning points as Justice League of America enters a new arc with no Batman in the team, the Titans discover the traitor amongst them in “The Destroyer”, and Kid Flash returns to the Teen Titans.

Batman Annual #2 [11/29] Story by TOM KING; Art by LEE WEEKS. Taking place in the past, the issue will follow Catwoman and Batman’s early days as their relationship change from rivalry to romance and back to rivalry. 48 pg, $4,99 US

Detective Comics #968-969 [11/08 – 11/22] Story by JAMES TYNION IV; art by ALVARO MARTINEZ and RAUL FERNANDEZ. “A LONELY PLACE OF LIVING” finale and “FALL OF THE BATMEN” part one. Tim Drake is back on Earth but he has brought a deadly threat with him. The following arc seems to be focused on Clayface as he struggles to keep his psyche under control. 32 pg, $2.99 US

Batman: White Knight #2 [11/01] Story and art by SEAN MURPHY. Public support for Batman dwindles and Gotham City’s middle-class rally around ex-Joker Jack Napier’s crusade to expose decades of corruption within the GCPD. A proposition inspires new revelations about Harley and The Joker’s past. Bruce struggles to stay focused on engineering a technological breakthrough to save Alfred. 32 pg, $3.99 US. 2 of 7.

Batman: Creature Of The Night #1 [11/29] Written by KURT BUSIEK; Art by JOHN PAUL LEON. Living in the real world with no superheroes to save the day, young Bruce Wainwright loses his parents in a violent crime. As grief and rage build inside Bruce until he feels he can’t keep it inside anymore, something strange starts taking wing in the Gotham night. 48 pg, $5.99 US. 1 of 4

The Shadow/Batman #2 [11/1] Written by STEVE ORLANDO; Art by GIOVANNI TIMPANO. The truth behind the secret Shadow has been hiding comes to light and  threatens the relationship with Batman and Robin. 32 ps, $3.99 US. 2 of 6

Bane: Conquest #7 [11/01] Story by CHUCK DIXON; art by GRAHAM NOLAN. The new spiritual leader of the Kobra cult is born and Bane and his crew set out on a global hunt for the newborn baby. The man who broke the Bat turns surrogate daddy to the world’s most wanted infant. 32 pg, $3.99 US. 7 of 12.

Batgirl and the Birds of Prey #16 [11/08] Story by JULIE BENSON and SHAWNA BENSON; art by ROGE ANTONIO. “MANSLAUGHTER” part two. Help comes to the Birds of Prey in the shape of Catwoman, Poison Ivy, Harley Quinn, Batwoman, Spoiler, Gotham Girl and Wonder Woman. 32 pg, $3.99 US

Batwoman #9 [11/15] Story by MARGUERITE BENNETT; art by FERNANDO BLANCO. “FEAR AND LOATHING” part three. Under influence of Scarecrow’s toxin, Kate is fighting her way out of a desert as she tries to avoid being captured by the Many Hands of Death and Colony Prime. 32 pg, $3.99 US

Harley & Ivy Meet Betty & Veronica #2 [11/01] Written by PAUL DINI and MARC ANDREYKO; Art by LAURA BRAGA. Veronica and Betty’s killer costume idea gets stolen by two crashers from Gotham City. Of course, they can’t know that the are facing off with the real Poison Ivy and Harley Quinn. 32 pg, $3.99 US. 2 of 6

Harley Quinn: Be Careful What You Wish For Special Edition #1 [11/29] Written by AMANDA CONNER and JIMMY PALMIOTTI; Art by AMANDA CONNER and CHAD HARDIN. Originally published as a Loot Crate exclusive, this tale tells the story of what happens when Harley finds a genie. 48 pg, $4.99 US.

Nightwing #32-33 [11/01 – 11/15] Story by TIM SEELEY; art by MIGUEL MENDONÇA and DIANA CONESA. “RAPTOR’S REVENGE” parts three and four. Raptor is taking his resentment out on Blüdhaven, making Blockbuster and Nightwing join forces to go against him. 32 pg, $2.99 US

Nightwing: The New Order #4 [11/22] Story by KYLE HIGGINS; art by TREVOR McCARTHY. The pursuit of his missing son brings Dick Grayson face to face with his ex and a tentative new alliance is formed between former enemies. But when a stunning discovery is made about his son’s unique superpowers, the stakes become much higher and Grayson must take the fight straight to the Crusaders. 32 pg, $3.99 US. 4 of 6.

Ragman #2 [11/08] Story by RAY FAWKES; art by INAKI MIRANDA. When a pair of demons attacks Rory’s father in order to get to the Suit of Souls, Rory jumps into battle head-on. But with little practice using the suit, Rory gets tangled in a web of nightmares. 32 pg, $2.99 US. 2 of 6

Red Hood and the Outlaws #16 [11/08] Story by SCOTT LOBDELL; art by DEXTER SOY. “BIZARRO REBORN” part three. The Outlaws are imprisoned in Belle Reve and Amanda Waller has her sight set on them. 32 pg, $3.99 US

Justice League of America #18-19 [11/08 – 11/20] Story by STEVE ORLANDO; art by HUGO PETRUS. “SURGICAL STRIKE” parts one and two. Batman leaves the team, and Vixen is put in the position of leader just as the villain Prometheus strikes them in their Secret Sanctuary. 32 pg, $2.99 US

Justice League of America Annual #1 [11/29] Story by STEVE ORLANDO; art by KELLEY JONES. The reasons for Lobo to be in the JLA are revealed when he recruits Black Canary to help him on a mission that takes them to the far reaches of the galaxy. 48 pg, $4.99 US.

Suicide Squad #29-30 [11/8 – 11/22] Story by ROB WILLIAMS; art by ELEANORA CARLINI. “THE SECRET HISTORY OF TASK FORCE X” parts three and four. Amanda Waller discovers what led to the demise of the first team, led by Rick Flag: a creature known as Red Wave who has the power to reduce the planet to ashes. It is the Squad’s duty to complete their predecessors’ final mission. 32 pg, $2.99 US

Super Sons #10 [11/15] Story by PETER J. TOMASI; art by BRIAN CHING. “SECRET HEADQUARTERS”. The Super Sons get their very own secret headquarters as Superboy has to deal with newfound powers, and Robin faces a decision made by Batman that will change his life. 32 pg, $3.99 US

Trinity #15 [11/15] Story by ROB WILLIAMS; art by V KEN MARION and MICK GRAY. “DARK DESTINY” finale. The Trinity, the Outlaws, Constantine, Deadman and Zatanna together try to find a way to stop Circe and Ra’s al Ghul from opening the Pandora Pits. 32 pg, $3.99 US

Hal Jordan and the Green Lantern Corps #32 [11/08] Written by ROBERT VENDITTI; art by ETHAN VAN SCIVER. “BATS OUT OF HELL” part three. The Dawnbreaker, the Lantern Batman of the Dark Knights, descends on Coast City. 32 pg, $2.99 US

Justice League #33 [11/15] Written by BRYAN HITCH; art by TYLER KIRKHAM. “BATS OUT OF HELL” finale. The League is taken as sacrifice to the base of the Dark Knights, and Cyborg is their only hope of survival. 32 pg, $2.99 US

Hawkman: Found #1 [12/20] Story by JEFF LEMIRE; Art by BRYAN HITCH and KEVIN NOWLAN. Carter Hall—a.k.a. Hawkman—is missing. A mysterious man tries to piece together what happened to him. 32 pg, $3.99 US. One-shot

Bombshells United #5-6 [11/01 – 11/15] Story by MARGUERITE BENNETT; art by SIYA OUM and SANDY JARRELL. Donna Troy and Cassie Sandsmark are left to defend their hometown from persecution. 32 pg, $3.99 US. Digital first

Injustice 2 #13-14 [11/01 – 11/15] Story by TOM TAYLOR; art by MIKE S. MILLER, DANIEL SAMPERE and JUAN ALBARRAN. In Kahndaq, Kara Zor-el continues her tutelage under the watchful eye of Black Adam. But Damian Wayne, visiting as an emissary of Ra’s al Ghul, decides that it’s time for Kara to begin her training, leading to the two of them out of the kingdom without Adam’s knowledge or approval. As the world reacts to the devastating assault on Washington, D.C., Batman and his team recover from the physical and mental wounds from the disastrous attack on Ra’s al Ghul’s base. 32 pg, $2.99 US. Digital first

Injustice 2 Annual #1 [11/29] Written by TOM TAYLOR; Art by MARCO SANTUCCI. “Paradise Lost.” Ever since the overthrow of Superman’s regime, Wonder Woman has been held a prisoner on her native Themyscira. The story of how she came to be susceptible to Superman’s brutal, world- conquering vision is told here. 48 pg, $4.99 US. Digital first

Gotham City Garage #3-4 [11/08 – 11/22] Story by JACKSON LANZING and COLLIN KELLY; art by ANEKE. Dr. Harleen Quinzel was once the architect of Governor Luthor’s mind-controlling ridealong project; now, as Harley Quinn—with her sidekick JØker in tow—she’s returned to the Garden to see her good work burn. The Bat and Batgirl have never forgotten the trouble she’s caused, and her return to the city is their chance for revenge. In the following issue, Catwoman begins the greatest heist of her career, with Dick Grayson and Kara Gordon caught in her crossfire. 32 pg, $2.99 US. Digital first