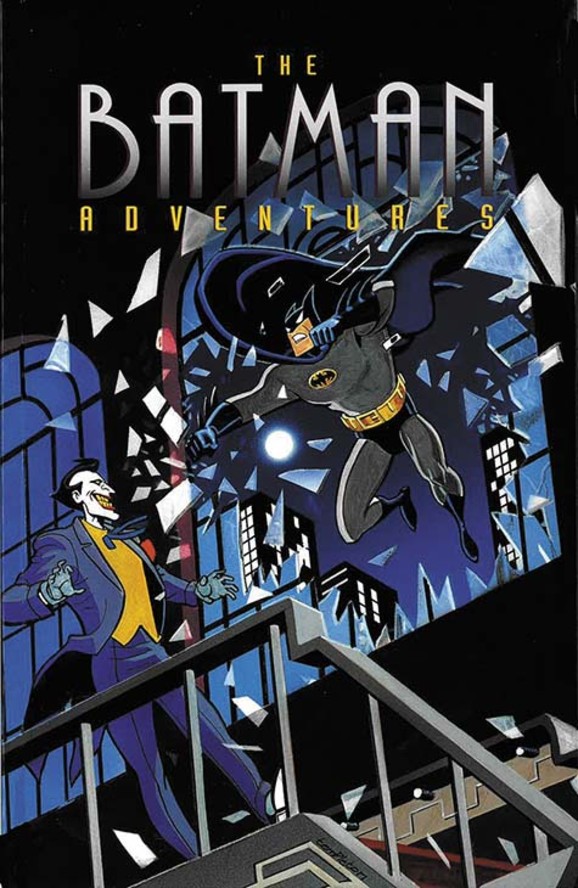 DC has released some advanced solicitations for Batman-related graphic novels and trade releases that will be available at various times through the months of November and December.  Many of these are collected editions of various ongoing titles, but several are worth of special note.  These solicitations include a hard cover volume collecting the comic title based on the video game Batman: Arkham Origins as well as a collection of the first ten issues of the all ages title Batman Adventures from 2003-2004 which was set in the universe of Batman: The Animated Series.

BATMAN: DETECTIVE COMICS VOL. 4 – THE WRATH TP
Written by JOHN LAYMAN and JAMES TYNION IV
Art by JASON FABOK, ANDY CLARKE, JASON MASTERS, SCOT EATON and others
Cover by JASON FABOK
On sale NOVEMBER 19 • 264 pg, FC, $17.99 US
The Caped Crusader is challenged by the mystery of the 900 in a special tale celebrating the 900th issue of DETECTIVE COMICS! Plus, Batman faces two new foes: Emperor Penguin and the deadly vigilante known as The Wrath! Collects DETECTIVE COMICS #19-24 and ANNUAL #2.

BATGIRL VOL. 5: DEADLINE HC
Written by GAIL SIMONE and MARGUERITE BENNETT
Art by ROBERT GILL, FERNANDO PASARIN and JONATHAN GLAPION
Cover by ALEX GARNER
On sale DECEMBER 17 • 232 pg, FC, $24.99 US
It’s a hazardous reunion between Batgirl and the former Court of Owls assassin Strix as they face off against the lethal new threat known as Silver – the man who knows the secret of Gotham City’s conspiracy of bats! Collects BATGIRL #27-34 and ANNUAL #2.

CATWOMAN VOL. 5: RACE OF THIEVES TP
Written by ANN NOCENTI and JOHN LAYMAN
Art by AARON LOPRESTI, RAFA SANDOVAL, PATRICK OLLIFFE and others
Cover by TERRY DODSON and RACHEL DODSON
On sale NOVEMBER 12 • 232 pg, FC, $17.99 US
As the fabled Catbird of Gotham City, Selina Kyle fights alongside Batman to keep the city safe. So why does it all feel so wrong? Who is behind this twisted – yet strangely pleasant – version of Gotham City? Find out in these tales from issues #25 and 27-34!

BATMAN/SUPERMAN VOL. 1: CROSS WORLD TP
Written by GREG PAK
Art by JAE LEE, BEN OLIVER, YILDIRAY CINAR, BRETT BOOTH and NORM RAPMUND
Cover by JAE LEE
On sale NOVEMBER 12 • 144 pg, FC, $14.99 US
In this first title collecting BATMAN/ SUPERMAN #1-4 and JUSTICE LEAGUE #23.1: DARKSEID, learn how these two legends met for the first time in The New 52 as they launch into a mysterious adventure that takes them to the world of Earth 2!

JUSTICE LEAGUE: TRINITY WAR TP
Written by GEOFF JOHNS, JEFF LEMIRE, MATT KINDT and RAY FAWKES
Art by IVAN REIS, DOUG MAHNKE and others
Cover by JIM LEE and SCOTT WILLIAMS
On sale NOVEMBER 26 • 320 pg, FC, $19.99 US
The blockbuster event of the summer is now in paperback, featuring stories from JUSTICE LEAGUE #22-23, JUSTICE LEAGUE OF AMERICA #6-7, JUSTICE LEAGUE DARK #22-23, CONSTANTINE #5, TRINITY OF SIN: PANDORA #1-3 and TRINITY OF SIN: PHANTOM STRANGER #11. When the three Justice Leagues go to war with one another, whose side will everyone be on?

BATMAN AND ROBIN VOL. 4: REQUIEM FOR DAMIAN TP
Written by PETER J. TOMASI
Art by PATRICK GLEASON, MICK GRAY, and others
Cover by PATRICK GLEASON and MICK GRAY
On sale NOVEMBER 26 • 176 pg, FC, $16.99 US
Spinning out from the tragic death of Damian Wayne, the Dark Knight attempts to cope with the death of not only his son and partner. This title collects BATMAN AND ROBIN #18-23.

BATWOMAN VOL. 5: WEBS TP
Written by MARC ANDREYKO
Art by TREVOR McCARTHY, JEREMY HAUN and others
Cover by TREVOR McCARTHY
On sale NOVEMBER 5 • 272 pg, FC, $19.99 US
Batwoman faces a threat that might make her rethink her career as a hero! But that’s not Kate’s only concern, as Maggie has a surprising revelation – and her angry ex-husband shows up! Can Kate and Maggie work together to discover the secret of the Wolf Spider? Collects BATWOMAN ANNUAL #1 and BATWOMAN #25-31.

BATMAN: ARKHAM ORIGINS HC
Written by ADAM BEECHEN, DOUG WAGNER and FRANK HANNAH
Art by CHRISTIAN DUCE, VICENTE CIFUENTES, TOM DERENICK, VICTOR DRUJINIU and others
Cover by BRYAN HITCH
On sale DECEMBER 3 • 160 pg, FC, $22.99 US
Based on the hit video game, this volume collects in print for the first time the ground-breaking, multi-path digital comic. This prequel story features an inexperienced Batman going up against crime bosses Black Mask and The Penguin for the first time!

BATMAN BEYOND 2.0: REWIRED TP
Written by KYLE HIGGINS
Art by THONY SILAS and ERIC WIGHT
Cover by SEAN MURPHY
On sale NOVEMBER 5 • 176 pg, FC, $16.99 US
It’s a new direction for Terry McGinnis as Commissioner Barbara Gordon enlists Terry’s help while investigating the death of Neo-Gotham’s Mayor in the new Arkham Institute. Was it really only a heart attack? Or was one of Arkham’s infamous inmates responsible? Don’t miss these stories from BATMAN BEYOND UNIVERSE 2.0 #1-16!

BATMAN ADVENTURES VOL. 1 TP
Written by KELLEY PUCKETT and MARTIN PASKO
Art by TY TEMPLETON, RICK BURCHETT, BRAD RADER and MIKE PAROBECK
Cover by TY TEMPLETON
On sale NOVEMBER 5 • 240 pg, FC, $19.99 US
The first ten issues of the classic all-ages series are back in a new collection! Don’t miss these tales of the Dark Knight featuring appearances by The Joker, The Penguin, Catwoman, Scarecrow, Killer Croc, Clayface, The Riddler and more!