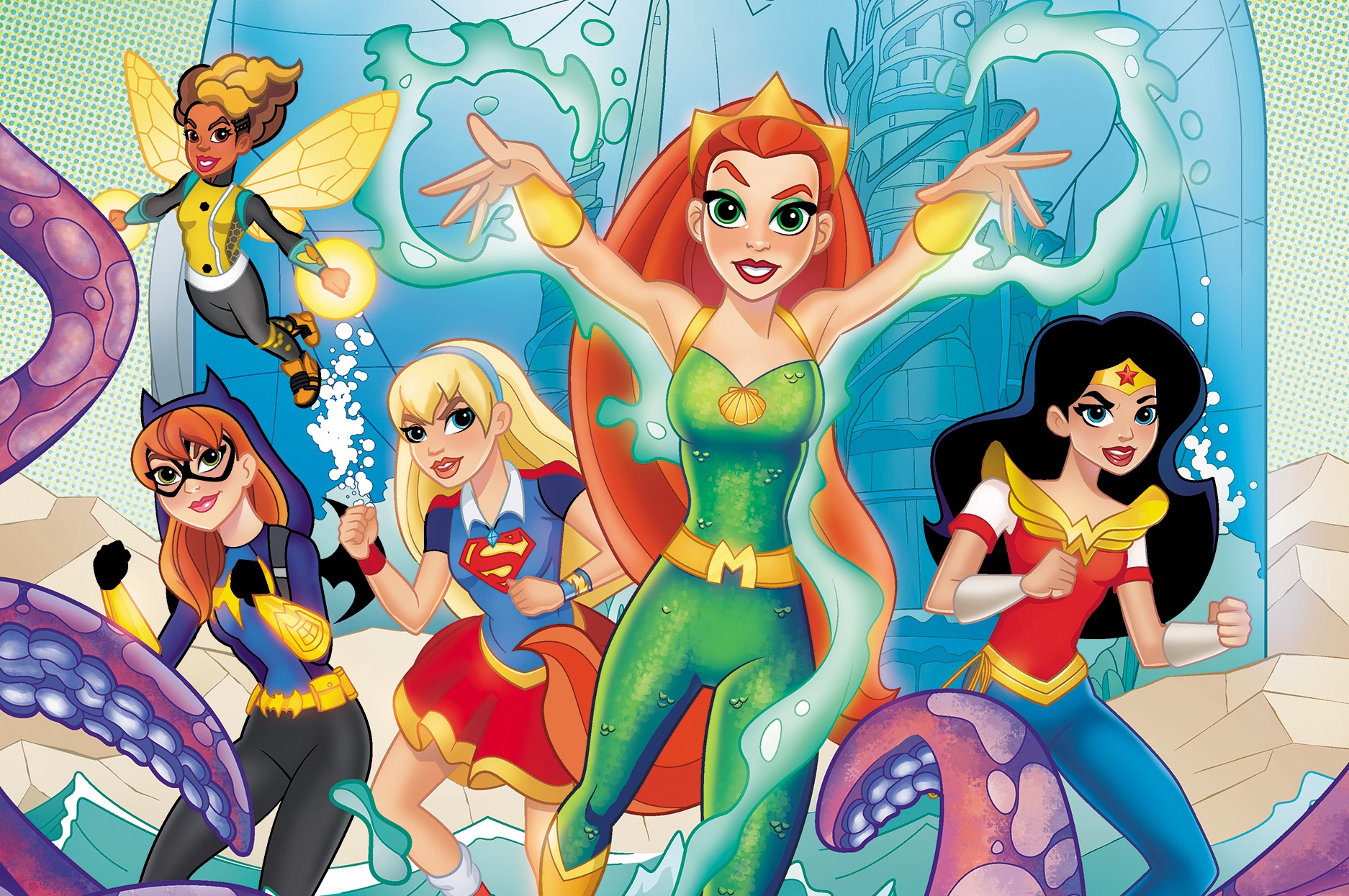 Details for DC Ink and Zoom, the two new imprints coming from DC that focus on younger readers, are starting to trickle in and it really looks like they’ll have a title for every age group and demographic, from fairy tales with a superhero twist to brand new origin story for Batman. Bleeding Cool has gathered together tidbits from each title that was revealed at the American Library Association meeting that we’ve included below along with the writer and release date of the graphic novels that should appeal to Batman fans.

Starting off with the DC Zoom titles geared for the children 8-12: The team is back and ready to rescue Mera’s home in DC Super Hero Girls: Search for Atlantis! The Super Hero Girls join forces with the Teen Titans crew as they work together to save Atlantis and the Atlanteans from Brainiac!

Mera is the new girl at Super Hero High and when Wonder Woman takes Mera under her wing, Wonder Woman’s best friend Bumblebee is overcome with jealousy. Despite her feelings, Bumblebee accompanies Mera and the Super Hero Girls on a field trip to Atlantis. But when they arrive, Atlantis is missing! Mera is horrified when they discover that Brainiac has shrunken and stolen Atlantis with the Atlanteans trapped inside! The Super Hero Girls must work together to defeat Brainiac and, along the way, Bumblebee must learn the true meaning of friendship.

DC Super Hero Girls: Search for Atlantis continues to develop the relationships forged in DC Super Hero Girls: Finals Crisis, Hits, and Myths, Summer Olympus, Past Times at Super Hero High, Date with Disaster! and Out of The Bottle. Written by Shea Fontana, this story is perfect for ages 6-12! With Lower Metropolis under twelve feet of water, with superstorms cycling around the world destroying farmland and with what Ridley described as “a coastal ambush” of refugees heading to Denver and Lincoln, Nebraska as the coastline get flooded. These super sons abandoned by their fathers will meet a young woman and rightful heiress of a continental empire facing four rival girls. They will work together, be friends together, be middle school kids and solve a world crisis. Maybe. Meg Cabot’s brother is a police officer in Denver, with two daughters who want to follow in his footsteps, who look up his crimes on the internet asking about the position of the body he found when he comes home from work. He’s not too pleased with this and wants them to go into fashion design. And that’s the perspective she’s sharing in her graphic novel for DC Zoom, Black Canary: Ignite. Michael Northrop‘s graphic novel Dear Justice League is based on his work as a sports reporter. He observed the differences in the behavior and attitude that sports players exhibited, regarding a question he asked as opposed to a question that he presented as asked by a ten-year-old fan –  and how the players in question suddenly got a lot more honest and less likely to give out pat answers.

Batman Tales: Once Upon a Crime With a Damian Wayne sick at home not able to join his father, reading and envisioning himself as Pinocchio — but not just as one who wants to be a Boy Wonder, but to be his own father. Poison Ivy and Harley Quinn retell the Princess And The Pea in amongst the other prisoners of Arkham Asylum. Alfred in Wonderland with the Batfamily as prisoners of the Mad Hatter and Alfred must save them. And a Batman in the Snow story, guided by a spirit in a Snow Queen story. Batman Overdrive will feature a fifteen-year-old Bruce Wayne, a Millennial, born in 2004… and who finds a car in his late parents’ basement, a month before his sixteenth birthday – a car that his father had when he was sixteen. And so, with the help of his friends, he decides to restore the car, and then customize it, into the Batmobile. It’s a new origin of the Batman with a more vehicular origin.

Moving on to the DC Zoom titles geared towards children 10-15: “It’s a book about justice for teenagers, about thinking about right and wrong and trying to figure about right or wrong. It’s a book about activism. I do have the word intersectionality in there; I’m feeling really good about that. I’m sure I’ll get some tweets about that, also the word ‘systematic’, I’m hoping we get to keep it in there.”

Under the Moon: A Catwoman Tale Lauren Myracle spoke of learning how to translate her writing style to graphic novel form. She says she learned fast, thanks to her editor Bobbie Chase, learning not to have people sitting around talking to each other for a very long time. She also talked through having too many panels per page, giving the artist too much detail and too little, learning the lingo of thought balloons and being told, “Overall, you want to have a splash every twenty pages. I didn’t know what a splash was; I’d write ‘half page splash’ and be told, ‘that’s not a splash.’” A Bruce Wayne high school graphic novel with a 17-year-old part-Chinese Bruce Wayne and DC villains as high school teenagers. Melissa de la Cruz describes her Bruce Wayne as “a bit of a Great Gatsby figure,” throwing parties at Wayne Manor that he doesn’t like to engage in. And she populates his world with future villains of Gotham, including future Joker, Jack Smith, Bruce Wayne’s best friend — until they both meet a latina, Selina Kyle. Before he was Batman, he was Bruce Wayne. A reckless boy willing to break the rules for a girl who may be his worst enemy. The Nightwalkers are terrorizing Gotham City, and Bruce Wayne is next on their list. The city’s elites are being taken out one by one as their mansions’ security systems turn against them, trapping them like prey. Meanwhile, Bruce is about to become eighteen and inherit his family’s fortune, not to mention the keys to Wayne Industries and all the tech gadgetry that he loves. But on the way home from his birthday party, he makes an impulsive choice and is sentenced to community service at Arkham Asylum, the infamous prison that holds the city’s most nefarious criminals.

Madeleine Wallace is a brilliant killer . . . and Bruce’s only hope. The most intriguing inmate in Arkham is Madeleine, a brilliant girl with ties to the Nightwalkers. A girl who will only speak to Bruce. She is the mystery he must unravel, but is he convincing her to divulge her secrets, or is he feeding her the information she needs to bring Gotham City to its knees? In this second DC Icons book–following Leigh Bardugo’s Wonder Woman: Warbringer–Bruce Wayne is proof that you don’t need superpowers to be a superhero, but can he survive this game of tense intrigue, pulse-pounding action, and masterful deception? Will explore the Teen Titans’ lives before they realize they have powers, as a series of coming-of-age graphic novels, each featuring a different Teen Titan, and eventually the stories will interweave into a Teen Titans team story. While the group of five Teen Titans has not been confirmed, we assume that a Robin is included amongst the team.