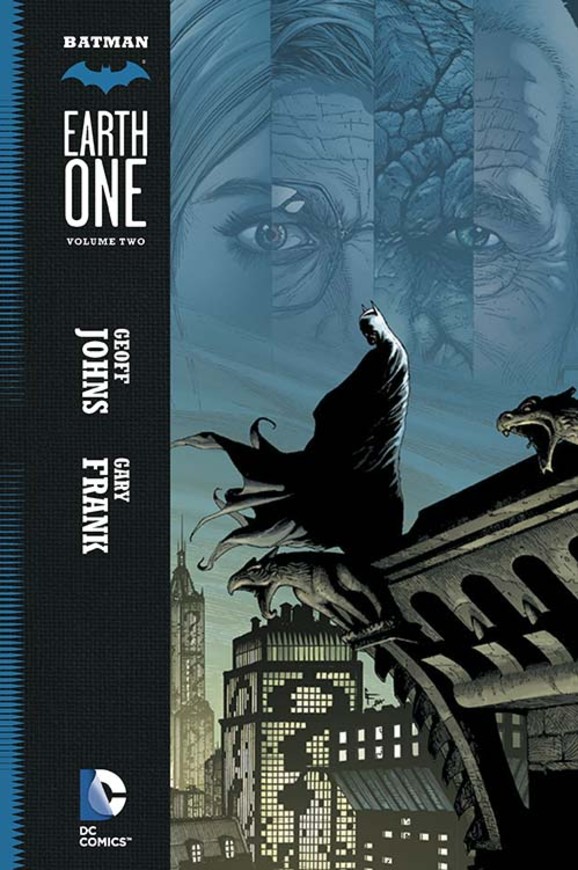 DC has released some advanced solicitations for Batman-related graphic novels and trade releases that will be available throughout the months of April and May of 2015.  Several of these are for collected editions of current and former New 52 ongoing titles (the final trade of the “Zero Year” storyline in Batman, a newly numbered Vol.1 for Batgirl that begins with the creative team change in issue #35, as well as trades Batman/Superman, Detective Comics, The New Teen Titans, and Harley Quinn) but DC is also releasing several other collected editions such as a paperback collected edition of all the various Zero Year issues, book two of a new collected edition of Gotham City Sirens, and new collected editions of other ongoings outside the New 52 label (Batman ’66 and  Injustice: God’s Among Us Year Two).  Lastly, also available in May will be the long-awaited second volume of Batman: Earth One.  See the full list of advanced solicitations below.

BATMAN VOL. 5: ZERO YEAR – DARK CITY TP
Written by SCOTT SNYDER
Art by GREG CAPULLO and DANNY MIKI
Cover by GREG CAPULLO
On sale APRIL 29 • 240 pg, FC, $16.99 US
Before the Batcave and Robin, The Joker and the Batmobile, there was ZERO YEAR. The Riddler has plunged Gotham City into darkness. How will a young Dark Knight bring his beloved hometown from the brink of chaos and madness back into the light? This final ZERO YEAR volume collects BATMAN #25-27 and 29-33.

BATGIRL VOL. 1: BURNSIDE HC
Written by CAMERON STEWART and BRENDEN FLETCHER
Art by BABS TARR
Cover by CAMERON STEWART
On sale MAY 27 • 176 pg, FC, $24.99 US
Barbara Gordon is no stranger to dusting herself off when disaster strikes, so when a fire destroys everything she owns, she spots the opportunity for a new lease on life – and seizes it! Following the rest of Gotham City’s young adults to the hip border district of Burnside, Barbara sets about building an all-new Batgirl…and discovers new threats preying on her peers! As the new hero of Burnside, Batgirl gets started by facing twin sister assassins on motorcycles! Collects BATGIRL #35-40.

BATMAN/SUPERMAN VOL. 3: SECOND CHANCE HC
Written by GREG PAK
Art by TOM RANEY, KEN LASHLEY, DIOGENES NEVES, TOM DERENICK, KARL KERSCHL, DANIEL SAMPERE and others
Cover by JAE LEE
On sale MAY 6 • 160 pg, FC, $22.99 US
The worlds of Batman and Superman clash as something terrible happens to the World’s Finest team, and a Dark Knight who is not quite himself must team up with Lois Lane to find a missing Man of Steel. Meanwhile, Selina Kyle encounters a person of amazing strength who has no idea who he is. Collects issues #10-15.

BATMAN – DETECTIVE COMICS VOL. 6: ICARUS HC
Written by FRANCIS MANAPUL and BRIAN BUCCELLATO
Art by FRANCIS MANAPUL, SCOTT HEPBURN, WERTHER DELL’EDERA and others
Cover by FRANCIS MANAPUL
On sale MAY 20 • 176 pg, FC, $24.99 US
It’s a bold new direction for DETECTIVE COMICS as THE FLASH creative team of Francis Manapul and Brian Buccellato take over the creative reins! Batman finds himself knee-deep in a new mystery involving a deadly new narcotic that has hit the streets of Gotham City. Can the Dark Knight stop the threat before the entire town finds itself embroiled in a deadly gang war that could burn everything – and everyone – down to the ground? Collects issues #30-34 and DETECTIVE COMICS ANNUAL #3.

HARLEY QUINN VOL. 1: HOT IN THE CITY TP
Written by AMANDA CONNER and JIMMY PALMIOTTI
Art by AMANDA CONNER, CHAD HARDIN, STEPHANE ROUX and others
Cover by AMANDA CONNER
On sale APRIL 8 • 224 pg, FC, $16.99 US
The sensational series that gave Harley Quinn her own New 52 spotlight is collected from the star-studded #0 issue to issue #8! Don’t miss Harley’s big move to Coney Island as she becomes a roller derby queen – all while she carries on in her criminal career!

GOTHAM CITY SIRENS BOOK TWO TP
Written by TONY BEDARD and PETER CALLOWAY
Art by ANDRES GUINALDO, JEREMY HAUN and others
Cover by GUILLEM MARCH
On sale APRIL 29 • 304 pg, FC, $24.99 US
In these tales from issues #14-26, Catwoman deals with the aftermath of battling her sister, setting her against Harley Quinn and Poison Ivy! Then, The Joker is back in Arkham Asylum, so Harley Quinn breaks back in with him – but will she stand by him or destroy him? Either way, Poison Ivy and Catwoman must put aside their differences to help their wayward friend.

INJUSTICE: GODS AMONG US YEAR TWO VOL. 1 TP
Written by TOM TAYLOR
Art by BRUNO REDONDO, TOM DERENICK, MIKE S. MILLER, JHEREMY RAAPACK and others
Cover by JHEREMY RAAPACK
On sale APRIL 15 • 144 pg, FC, $14.99 US
The death of one of their own has divided Earth’s protectors as hero turns against hero. As Superman’s iron grip on the world tightens, at the edge of the galaxy another grave threat approaches. Collects INJUSTICE: GODS AMONG US YEAR TWO #1-6.

BATMAN ‘66 VOL. 2 TP
Written by JEFF PARKER and TOM PEYER
Art by TY TEMPLETON, TED NAIFEH, CRAIG ROUSSEAU, CHRIS SPROUSE, RUBEN PROCOPIO, CHRISTOPHER JONES and others
Cover by MICHAEL ALLRED
On sale APRIL 22 • 168 pg, FC, $14.99 US
In this volume of tales pulled from issues #6-10 of the digital-first series, King Tut returns to challenge the Dynamic Duo with his most far-reaching plan yet to rule the modern Thebes known as Gotham City! Plus, Batman and Robin meet the Bookworm, face off with False Face and more!

THE NEW TEEN TITANS VOL. 2 TP
Written by MARV WOLFMAN and GEORGE PEREZ
Art by GEORGE PEREZ and ROMEO TANGHAL
Cover by GEORGE PEREZ
On sale APRIL 1 • 224 pg, FC, $19.99 US
In these stories from NEW TEEN TITANS #9-16, the team must stop the Puppeteer from stealing plans for the deadly Promethium Project from Dayton Industries, unaware that Deathstroke is also after them! And after arriving on Paradise Island to save an injured Changeling, they must help the Amazons battle the Titans of myth!

BATMAN EARTH ONE VOL. 2 HC
Written by GEOFF JOHNS
Art by GARY FRANK and JON SIBAL
Cover by GARY FRANK
On sale MAY 6 • 160 pg, FC, $24.99 US
It’s here – the sequel to the #1 New York Times bestseller and critically acclaimed BATMAN: EARTH ONE by the superstar creative team of writer Geoff Johns and artist Gary Frank! While Gotham City is plunged into terror by an enigmatic anarchist and killer calling himself The Riddler, the Dark Knight must reconcile the increasingly conflicting ideologies of Detective Jim Gordon and Bruce Wayne’s head of security, Alfred Pennyworth. But there are many more mysteries lurking within Gotham City, including the secret agenda of Harvey Dent and the bizarre creature prowling the sewers – Killer Croc!