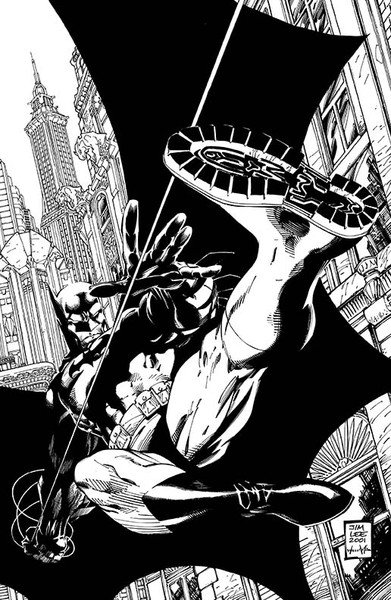 DC has released some advanced solicitations for Batman-related graphic novels and trade releases that will be available throughout the months of August and September of 2015.  Several of these are for collected editions of current and former New 52 ongoing titles (Gotham by Midnight Vol. 1, Secret Origins Vol. 2, and Teen Titans Vol. 1) as well as other collected editions from either outside the New 52 line or from comics that predate the New 52.

These solicitations include a harcover of the Batman: Endgame story arc from Batman #35-40 as well as a special Joker: Endgame hardcover which includes all Joker story backups from those same issues of Batman as well as all the Endgame tie-in comics.  Also included are Batman Noir: Hush hardcover which presents the popular story in a black and white noir edition, a new deluxe hardcover of Batman: The Dark Knight Returns, and a new “unwrapped” hardcover of Batman R.I.P.

BATMAN VOL. 7: ENDGAME HC
Written by SCOTT SNYDER
Art and cover by GREG CAPULLO and DANNY MIKI
On sale SEPTEMBER 30 • 192 pg, FC, $24.99 US
The Joker is back in these stories from BATMAN #35-40! For years, The Joker has regarded Batman with a sick, twisted love. But now, the Clown Prince of Crime is done playing. He’s going to kill Batman. And he’s going to do it using those whom Batman loves the most: the Justice League. The Joker returns to Gotham City with a deadlier agenda than ever before, using every tool at his disposal to finally kill the Dark Knight. That includes turning Batman’s allies against him in the bloodiest brawl that he’s ever had to survive.

BATMAN NOIR: HUSH HC
Written by JEPH LOEB
Art by JIM LEE and SCOTT WILLIAMS
Cover by JIM LEE
On sale SEPTEMBER 16 • 304 pg, B&W, $39.99 US
The epic thriller is presented in stark black and white! In this story of murder, mystery and romance, Batman sets out to discover the identity of the mysterious villain wreaking havoc in his life. But Batman ends up facing what might be the most intense case of his life as secrets from his past flood into the present, and the most notorious villains to ever haunt Gotham City’s streets attack simultaneously! Guest-starring The Dark Knight’s greatest allies and enemies, this collection features BATMAN #608-619 as well as the 6-page chapter from Wizard #0 and a 2-page origin story that originally appeared at dccomics.com.

BATMAN R.I.P. UNWRAPPED HC
Written by GRANT MORRISON
Art and cover by TONY S. DANIEL
On sale SEPTEMBER 9 • 224 pg, B&W, $34.99 US
This stunning unwrapped collection features the game-changing BATMAN: R.I.P., the story that led into Grant Morrison’s best-selling FINAL CRISIS. Batman is dead – and with him out of the picture, The Club of Villains begins a crime spree through the streets of Gotham City, while Batman’s allies attempt to keep order. This deluxe edition presents the art of Tony S. Daniel from issues #676-681 in pencil form.

GOTHAM BY MIDNIGHT VOL. 1: WE DO NOT SLEEP TP
Written by RAY FAWKES
Art and cover by BEN TEMPLESMITH
On sale AUGUST 19 • 128 pg, FC, $14.99 US
Spinning out of BATMAN ETERNAL, these stories from issues #1-5 of the new series star Jim Corrigan as he leads a group of very unlikely detectives against supernatural forces in Gotham City! But when an Internal Affairs officer starts looking into their work, it may take divine intervention to keep him alive! And how long can Corrigan keep The Spectre at bay?

TEEN TITANS VOL. 1: BLINDED BY THE LIGHT HC
Written by WILL PFEIFER
Art by KENNETH ROCAFORT and SCOTT HEPBURN
Cover by KENNETH ROCAFORT
On sale AUGUST 5 • 176 pg, FC, $24.99 US
Red Robin, Wonder Girl, Raven, Bunker and Beast Boy step out of the shadows to offer bold, sometime dangerous ideas on how to protect a world full of superpowered teenagers – any one of whom could be a hero or villain! But can they control their own presence on social media? And what is S.T.A.R. Labs’ interest in the new team? Find out in these stories from issues #1-7!