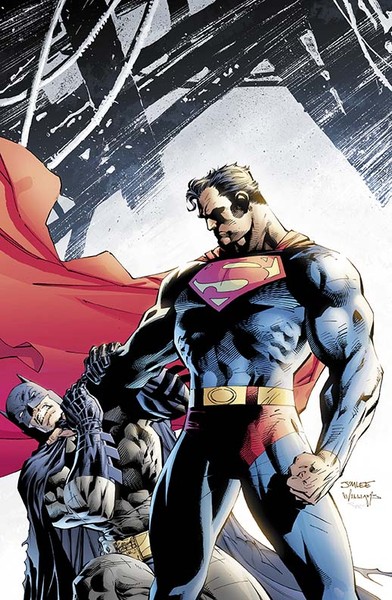 DC has released some advanced solicitations for Batman-related graphic novels and trade releases that will be available throughout the months of December 2015 and January 2016.  Several of these are for collected editions of current and former ongoing titles (Detective Comics Vol. 7 HC, Batman/Superman Vol. 3 TP, Catwoman Vol. 4 TP, Earth 2: World’s End Vol. 2 TP,  Harley Quinn Vol. 2 TP) as well as other collected editions from either outside the main DC line or from comics that predate it (Batman ’66 Vol 3 TP, Teen Titans Go: Truth, Justice, and Pizza TP).

Other noteworthy titles for TBU fans include a trade paperback celebration of the most incredible and memorable fights between Batman and Superman in advance of BvS next March for $9.99 which includes issues from The Dark Knight Returns, Batman (both Pre- and Post-Flashpoint), Superman/Batman and Justice League.  These solicitations also include a Deluxe HC edition of Matt Wagner’s miniseries Batman/Superman/Wonder Woman: Trinity, a trade paperback of the miniseries Batman: The Doom that Came to Gotham, a new, longer, and more expensive HC of Batman by Neal Adams which collects the creator’s entire history with the Dark Knight, new TPs from the old titles Nightwing (by Chuck Dixon) and Suicide Squad (by John Ostrander), and a 100 page Super Spectacular that serves as a collection of older stories based on the heroes now appearing in the upcoming minseries, Titans Hunt.

BATMAN VS. SUPERMAN TP
Written by FRANK MILLER, JEPH LOEB, SCOTT SNYDER, MARK VERHEIDEN, JOE KELLY and GEOFF JOHNS
Art by FRANK MILLER, KLAUS JANSON, JIM LEE, SCOTT WILLIAMS, GREG CAPULLO, MATTHEW CLARK and ED BENES
Cover by JIM LEE and SCOTT WILLIAMS
On sale DECEMBER 2 • 160 pg, FC, $9.99 US
The two most popular superheroes of all time aren’t always on the same side! This collection captures some of the most incredible and memorable clashes between the Man of Steel and the Dark Knight from the pages of BATMAN: THE DARK KNIGHT RETURNS #4, BATMAN #612, BATMAN #35-36, SUPERMAN/BATMAN #32 and #78, and JUSTICE LEAGUE #2.

BATMAN/SUPERMAN/WONDER WOMAN: TRINITY DELUXE EDITION HC
Written by MATT WAGNER
Art and cover by MATT WAGNER
On sale JANUARY 13 • 208 pg, FC, 7.0625” x 10.875”, $29.99 US
Matt Wagner’s 3-issue epic that unites DC’s three greatest heroes is offered as a Deluxe Edition hardcover for the first time! When Ra’s al Ghul recruits Bizarro and a renegade Amazon warrior to help him create global chaos, the Dark Knight Detective suddenly finds himself working with the Man of Steel and the Amazon Princess. Looking to thwart the madman’s plot to simultaneously destroy all satellite communications as well as all of the world’s oil reserves, Earth’s greatest heroes are forced to band together—if they can work out their differences!

BATMAN ‘66 VOL. 3 TP
Written by JEFF PARKER, ART BALTAZAR and FRANCO
Art by JONATHAN CASE, DARIO BRIZUELA, TED NAIFEH, DEAN HASPIEL, PAUL RIVOCHE, CRAIG ROUSSEAU and WILFREDO TORRES
Cover by MICHAEL ALLRED
On sale DECEMBER 2 • 168 pg, FC, $14.99 US
In this third BATMAN ‘66 collection, The Dynamic Duo face The Joker, The Penguin, the Queen of Diamonds and a Bat-Robot of their own making…that may put Batman and Robin out of a job! Collects issues #11-16.

BATMAN: THE DOOM THAT CAME TO GOTHAM TP
Written by MIKE MIGNOLA and RICHARD PACE
Art by TROY NIXEY and DENNIS JANKE
Cover by MIKE MIGNOLA
On sale DECEMBER 16 • 160 pg, FC, $16.99 US
In this tale of horror co-written by Hellboy creator Mike Mignola, Bruce Wayne unintentionally unleashes a dark evil on his city. Includes appearances by The Penguin, The Demon, Man-Bat, Ra’s al Ghul and more! Collects BATMAN: THE DOOM THAT CAME TO GOTHAM #1-3.

BATMAN/SUPERMAN VOL. 3: SECOND CHANCE TP
Written by GREG PAK
Art by TOM RANEY, KEN LASHLEY, KARL KERSCHL, and others
Cover by JAE LEE
On sale DECEMBER 16 • 160 pg, FC, $14.99 US
In this collection of issues #10-15, a Dark Knight who is not quite himself must team up with Lois Lane to find a missing Man of Steel. Meanwhile, Selina Kyle encounters a person of amazing strength who has no idea who he is.

CATWOMAN VOL. 4: THE ONE YOU LOVE TP
Written by SCOTT MORSE, MATTEO CASALI, ANDERSON GABRYCH and WILL PFEIFER
Art by PAUL GULACY, BRAD WALKER, RICK BURCHETT, ALVARO LOPEZ, PETE WOODS and others
Cover by ADAM HUGHES
On sale DECEMBER 16 • 280 pg, FC, $19.99 US
In the aftermath a gang war that ravaged Gotham City, Catwoman must make a deal with Hush to protect the East End. But to keep the streets safe, she’ll have to join forces with a group of super-villains—and take them down from within. Collects CATWOMAN #38-49.

BATMAN BY NEAL ADAMS OMNIBUS HC
Written by NEAL ADAMS, BOB HANEY, DENNIS O’NEIL and others
Art by NEAL ADAMS, DICK GIORDANO and others
Cover by NEAL ADAMS
On sale FEBRUARY 24 • 1,072 pg, FC, $99.99 US
At last, Neal Adams’ entire run on Batman is collected in one massive volume, with stories from the pages of BATMAN, THE BRAVE AND THE BOLD, DETECTIVE COMICS, WORLD’S FINEST, BATMAN: ODYSSEY, BATMAN: BLACK AND WHITE, and innumerable covers!

EARTH 2: WORLD’S END VOL. 2 TP
Written by DANIEL H. WILSON, MARGUERITE BENNETT and MIKE JOHNSON
Art by ROBSON ROCHA, JORGE JIMENEZ, TYLER KIRKHAM, EDDY BARROW and others
Cover by ARDIAN SYAF and JAIME MENDOZA
On sale DECEMBER 2 • 360 pg, FC, $24.99 US
Racing to learn the fate of Superman, the Wonders of Earth-2 find themselves in the clutches of Desaad and his twisted creations! Meanwhile, the Avatars of various realms come to the aid of Green Lantern to fend off the Furies of Apokolips, but will their might be enough? Collects EARTH 2 WORLD’S END #12-26.

INFINITE CRISIS: FIGHT FOR THE MULTIVERSE VOL. 2 TP
Written by DAN ABNETT
Art by AGUSTIN PADILLA, CHRISTIAN DUCE, SZYMON KUDRANSKI, and others
Cover by FREDDIE WILLIAMS II
On sale DECEMBER 30 • 192 pg, FC, $16.99 US
Facing impossible odds, the heroes of the Multiverse must reignite the defenses of the Monitor’s tower. And the person they have to rely on to do this is none other than Lex Luthor of the Gaslight World! Collects INFINITE CRISIS: FIGHT FOR THE MULTIVERSE #7-12.

NIGHTWING VOL. 3: FALSE STARTS TP
Written by CHUCK DIXON and DEVIN GRAYSON
Art by SCOTT McDANIEL, KARL STORY, GREG LAND and BILL SIENKIEWICZ
Cover by SCOTT McDANIEL and KARL STORY
On sale DECEMBER 30 • 296 pg, FC, $19.99 US
After a massive earthquake, Nightwing finds himself in a decimated Gotham City teaming with his Bat-family to help its citizens. Then, even as he makes his way back to Blüdhaven, a familiar face that’s equally friend and foe shows up at his doorstep: The Huntress! Collects issues #19-25 and 1,000,000, and NIGHTWING AND HUNTRESS #1-4.

WORLDS’ FINEST VOL. 6: THE SECRET HISTORY OF SUPERMAN AND BATMAN TP
Written by PAUL LEVITZ
Art by JED DOUGHERTY and SCOTT HANNA
Cover by STEPHEN SEGOVIA
On sale DECEMBER 2 • 144 pg, FC, $14.99 US
The secret history of Earth-2 continues in these tales from issues #27-32! Jump back in time to a point when Superman and Batman were children! When a visitor from Apokolips attempts to confront the boys as part of a galactic prophesy, only one being can stand in their way: Wonder Woman!

SUICIDE SQUAD VOL. 2: THE NIGHTSHADE ODYSSEY TP
Written by JOHN OSTRANDER and others
Art by LUKE McDONNELL, KEITH GIFFEN and others
Cover by JERRY BINGHAM
On sale DECEMBER 9 • 272 pg, FC, $19.99 US
In this title collecting SUICIDE SQUAD #9-16, JUSTICE LEAGUE INTERNA-TIONAL #13 and DOOM PATROL/SUICIDE SQUAD SPECIAL #1, the team must take down the island headquarters of a drug cartel that’s more than it seems. Then, the squad and the Justice League both try to infiltrate a Russian prison.

DC COMICS PRESENTS: TITANS HUNT 100-PAGE SUPER SPECTACULAR #1
Written by BOB HANEY
Art by BRUNO PREMIANI and NICK CARDY
Cover by TBA
On sale NOVEMBER 18 • 96 pg, FC, $7.99 US
The TITANS HUNT is on—and now, DC Comics collects some of the original stories that brought together your favorite teen heroes! Don’t miss some of the earliest tales of the Teen Titans in these stories from BRAVE AND THE BOLD #54 and 60, and TEEN TITANS #1 and 4, starring Robin, Aqualad, Kid Flash, Wonder Girl and Speedy!