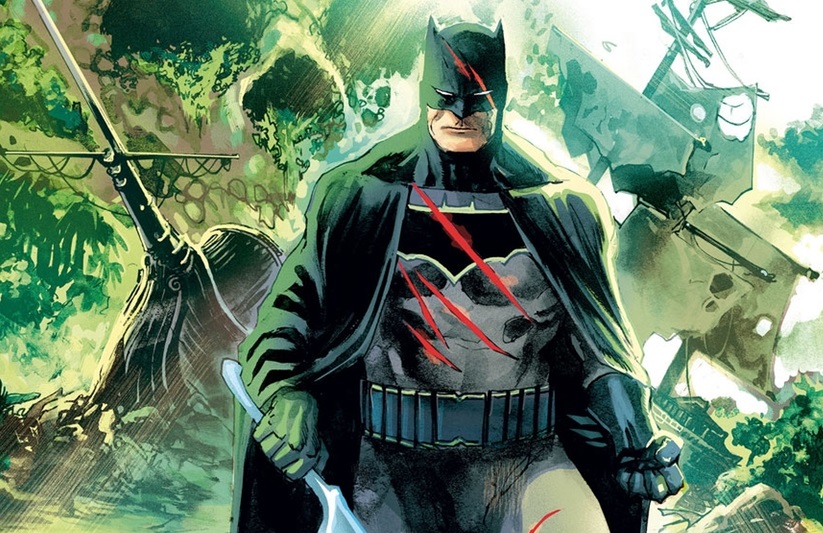 A few titles and a crossover is going to be spawning out of DARK NIGHTS: METAL in September. Firstly, there will be seven one-shots featuring evil versions of Batman coming from the Dark Multiverse, all of them a twisted batmanized version of a member of the League, plus a Joker and a Darkseid version. Five of the seven have been solicited even though three of them are coming out on October. The Devastator (Darkseid) and The Batman who Laughs (Joker) are still to be solicited. Also coming out of Metal is the three-part crossover titled “Gotham Resistance”. It will include TEEN TITANS #12, NIGHTWING #29 and SUICIDE SQUAD #25. It is unclear whether it will include more titles going into October, but it is very likely since part three is not solicited as the final issue of the event. The price of the regular titles will not be altered and the one-shots will cost $3,99.

Over in BATMAN, a second interlude was added to “The War of Jokes and Riddles” and part five, previously solicited as issue #29, got moved to issue #31. Also, ALL-STAR BATMAN will stop being published with issue #14, solicited as the final issue of the title. Another title coming to an end is BATMAN/THE SHADOW as the mini-series reaches issue #6. The biggest news for the main Batman titles though is the return of Tim Drake in DETECTIVE COMICS #965. The story will probably be tied to ACTION COMICS as Mr. Oz will be coming out of the shadows in the story arc “The Oz Effect”, starting issue #987.

All of the titles tying into the Metal crossover will be finishing their arcs before the start of the event. The NIGHTWING the Spyral arc will be finishing with the third part, and “Kill your Darlings” will be ending in SUICIDE SQUAD #25, which will be an oversized anniversary issue. HARLEY QUINN will also be getting a special, but for her 25th anniversary. In the regular title, the backup stories by Dini will no longer be published.

Lastly, BATMAN BEYOND will be having a special one-shot featuring the Batgirl of the Beyond-verse. Also, artist Fernando Blanco will be taking over BATWOMAN as James Tynion IV steps down from writing duties.

All-Star Batman #14 [09/13] Story by SCOTT SNYDER; art by RAFAEL ALBUQUERQUE and SEBASTIAN FIUMARA. “THE FIRST ALLY” finale. Batman has to make a choice between his future wearing the cowl and the life of Alfred. 40 pg, $4.99 US. FINAL ISSUE.

Batman #30-31 [09/06 -09/ 20] Story by TOM KING; art by CLAY MANN and MIKEL JANIN. “THE BALLAD OF KITE MAN” part two and “THE WAR OF JOKES AND RIDDLES” part five. The second interlude in the War will be showing Kite Man’s origin story. Resuming the main storyline, Batman will have to choose between the Joker and the Riddler in order to stop the war. 32 pg, $2.99 US

Detective Comics #964-965 [09/13 – 09/27] Story by JAMES TYNION IV; art by CARMEN CARNERO and EDDY BARROWS. “DYSTOPIA” and “A LONELY PLACE OF LIVING” part one. The first issue will be focusing on the newly formed alliance between Spoiler and Anarky, which will bring her back into Batman’s radar. The second will be following Red Robin as he tries to escape from Mr. Oz’s prison, under risk of becoming trapped beyond time and space for all eternity. 32 pg, $2.99 US

Batgirl #15 [09/27] Story by HOPE LARSON; art by CHRIS WILDGOOSE.”SUMMER OF LIES” part two. Dick and Babs’ have to confront their true feelings for each other as they face a villain from their past. 32 pg, $3.99 US

Batgirl and the Birds of Prey #14 [09/13] Story by JULIE BENSON and SHAWNA BENSON; art by MARCIO TAKARA. “FIELD TRIP”. The Birds of Prey have to complete a mission without letting Huntress’ students, who are on a field trip with her, realize what is happening. 32 pg, $3.99 US

Batwoman #7 [09/20] Story by MARGUERITE BENNETT; art by FERNANDO BLANCO. “FEAR AND LOATHING” part one. Kate gets stranded in the Sahara Desert with Colony Prime, both under influence of Scarecrow’s fear toxin. 32 pg, $3.99 US

Mother Panic #11 [09/27] Story by JODY HOUSER;  art by SHAWN CRYSTAL. A friend from the past comes back to Violet’s life, throwing her mission into turmoil. Backup story by JIM KRUEGER; art by PHIL HESTER and ANDE PARKS. “GOTHAM RADIO”. 32 pg, $3.99 US

Nightwing #28 [09/06] Story by TIM SEELEY; art by JAVIER FERNANDEZ. “Spyral” finale. Mr. Minos is back and tries to squeeze the secrets of the superhero community out of Nightwing’s brain. 32 pg, $2.99 US

Nightwing: The New Order #2 [09/27] Story by KYLE HIGGINS; art by TREVOR McCARTHY. Dick Grayson’s commitment to the Crusaders is put to the test after he learns a secret about a member of his own family. Eager to keep the scandal as quiet as possible, Grayson turns to an old friend for some answers. 32 pg, $3.99 US. 2 of 6.

Red Hood and the Outlaws #14 [08/09] Story by SCOTT LOBDELL; art by JOE BENNETT. “BIZARRO REBORN” part one. Red Hood and Artemis have to deal with a genius Bizarro, and Batwoman comes after Red Hood. 32 pg, $3.99 US

Dark Nights: Metal #2 – 3 [09/13 – 10/11] Story by SCOTT SNYDER; art by GREG CAPULLO and JONATHAN GLAPION. Superman and Wonder Woman hunt for a missing ally while Batman investigates the mystery at hand. Superman is pulled into the mystery of the Dark Multiverse while the Justice League follows the trail to a weapon that could keep the forces of the Dark Multiverse at bay. 32 pg, $4.99 US.  2 – 3 of 6.

Justice League #28-29 [09/06 – 09/20] Written by BRYAN HITCH; art by FERNANDO PASARIN and MATT BANNING. “LEGACY” parts three and four. Arthur Curry has followed the children of the Justice League from the future and is out to destroy them and their true intentions are revealed.  32 pg, $2.99 US

Justice League of America #14-15 [09/13 – 09/27] Story by STEVE ORLANDO; art by IVAN REIS, JOE PRADO and FELIPE WATANABE. “CRISIS IN THE MICROVERSE” parts three and four. The search for Ray Palmer continues and the League ends up on the planet Moz-Ga. Issue #15 will be telling how Ray Palmer ended up stranded in the microverse, continuing with the telling of the DC REBIRTH mythos. 32 pg, $2.99 US

Suicide Squad #25 [09/13] Story by ROB WILLIAMS; art by ELEONORA CARLINI. “KILL YOUR DARLINGS” finale. The Suicide Squad and The People come to their final confrontation. 40 pg, $3.99 US

Super Sons #8 [09/20] Story by PETER J. TOMASI; art by JORGE JIMENEZ. “PLANET OF THE CAPES” part three. The Super Sons find themselves in a weird world called Yggardis where they have to stop the world’s super-powered factions from killing each other. 32 pg, $3.99 US

Teen Titans #12 [09/13] Story by BENJAMIN PERCY; art by MIRKA ANDOLFO. “Gotham Resistance” part one. When Robin receives a distress call from Nightwing urging him to return home, he discovers that Gotham City has been transformed into a mosaic of monsters, magic and doom! Trapped inside the Riddler’s deadly maze with nowhere to turn, Robin soon assembles an unlikely team of hometown heroes including Batgirl, Harley Quinn, Killer Croc, Black Canary and Green Arrow to find the missing Nightwing and save their city. 32 pg, $3.99 US

Nightwing #29 [09/20] Story by TIM SEELEY; art by PAUL PELLETIER. “GOTHAM RESISTANCE” part two. Hopelessly lost in a kingdom of snow and ice, the team assembled by Damian is set upon by Mr. Freeze and his frost giants from the Dark Multiverse. But help arrives in the form of an at once foreign and familiar Dick Grayson. 32 pg, $2.99 US

Suicide Squad #25 [09/27] Story by ROB WILLIAMS; art by STJEPAN SEJIC. “GOTHAM RESISTANCE” part three. With realms dominated by twisted visions of Firefly, Poison Ivy, Two-Face, Scarecrow and Bane stretched out as far as the eye can see, the chances of saving Gotham City from the incursion of the Dark Multiverse are next to impossible. Which sounds like a job for the Suicide Squad. 32 pg, $2.99 US

Bombshells United #01-02 [09/06 – 09/20] Story by MARGUERITE BENNETT; art by MARGUERITE SAUVAGE. New series of the Bombshells. Set in 1943, Wonder Woman goes to the rescue of Cassie Sandsmark and Donna Troy, two girls whose families are being displaced from their homes. 32 pg, $3.99 US

Injustice 2 #9-10 [09/06 – 09/20] Story by TOM TAYLOR; art by DANIEL SAMPERE and JUAN ALBARRAN. Batman, Batgirl and their team—including a couple of important new recruits—mount a daring rescue mission into the jungle to save a group of children from the clutches of Ra’s al Ghul and his Suicide Squad. Harley Quinn puts her life on the line in a display of heroic defiance while Wildcat faces off against the fake Batman. 32 pg, $2.99 US