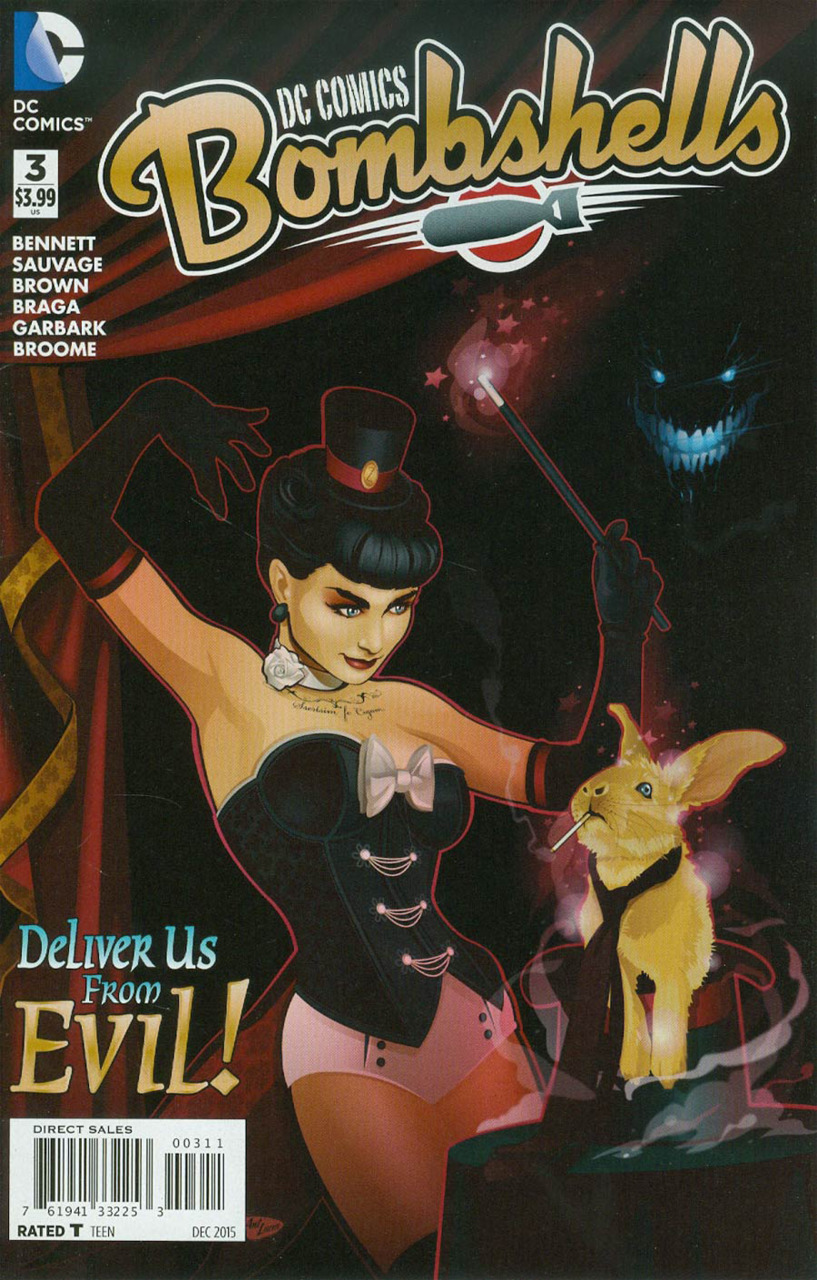 DC Comics Bombshells #3 collects the next three parts of the digital-first series based on the popular DC Collectibles Bombshells statues.

The third issue completes the ‘Enlisted’ storyline. The story is written by Marguerite Bennet, but the artist credits change for each part this issue. This will be a trend throughout the rest of the Bombshells run.

Part 1 (Art by Garry Brown and Colors by Doug Garbark): The Cabaret of Joker’s Daughter, Berlin, Germany, 1940 – Joker’s Daughter continues talking about the Prince that she serves when she asks the Nazi officer in charge whether he has chosen his offerings. Suddenly some of his own soldiers are slaughtered (a la Walking Dead’s Terminus), and their blood, along with some singing/chanting, and finally Zatanna’s special singing, awakens Tenebrus, The Binder. The Germans and Joker’s Daughter are rightly nervous when Tenebrus looks upon them, but what he really wants is the one who sang to him. Tenebrus takes human form and Zatanna runs off. Constantine, still in rabbit form, smokes a cigarette and tells Zatanna she is running with the wrong crowd.

Part 2 (Art and Colors by Marguerite Sauvage): Gotham City, 1940 – Batwoman is at Gotham City Harbor beating a guy for information on a list of names of Jewish families that he sold to the Nazis. He explains that his brothers smuggle Jews out by boat but also tell the Germans which boats those are. He doesn’t think it is that big a deal…but Kate does, since she is also a Jew. Outside, Maggie talks to other officers about the concern that with Batwoman leaving town crime will be on the rise. Another perp tries to attack Batwoman, but Harper Row (Batwoman’s greatest fan) jumps in and helps out…then asks for an autograph. Harper gets some advice, and then goes back to Desolation Row where she works at Duquesne Mechanics. Once there, she comes up with a plan for her other coworkers. At Cobblepot Boardwalk, Kate and Maggie have a romantic evening out, since it is their last night together. The following morning, they have a tearful goodbye and Kate meets Waller at the Gotham Train Depot, where all is not as it seems. One of the train cars opens up to reveal a command station with tech and extra Batwoman costumes. Kate is also introduced to her new teammates, Dr. Light (Kimiyo Hoshi) and Big Barda. Welcome to the Bombshells! Her first mission in taking down Hitler is to be a spy in Berlin, with Catwoman as her contact. Part 3 (Art by Laura Braga and Colors by Wendy Broome): Nearing the coast of Peloponnese, Greece, 1940 – Steve and Diana talk about the differences in astronomical names while Mera watches on and notes the obvious romantic currents. Once Steve goes to sleep, Mera and Diana talk about identities and how to be your own person. As they continue to meander down a narrow strait, an explosion goes off. Diana, Steve, and Mera, all get safely to shore, and Diana stumbles upon the war she wanted to find. Diana fights Nazis and tanks before the arrival of General Samson Lane. The Nazis surrender, and General Lane makes a call to Waller to tell her he has found a Bombshell.

While sometimes it is creatively necessary for an Elseworlds-type book to do a survey of characters already in existence, the difficulty with the wealth of possible characters that can be used is in using too many and not giving each the time she deserves. Since we have four main Bombshells that we are focusing on (Batwoman, Supergirl, Wonder Woman, and Zatanna), and only three stories are contained per print issue, there will continue to be one character lost in the shuffle each time. Last issue it was Batwoman, and this time it is Supergirl. We can probably expect this to be the trend until the stories begin to overlap and intersect, and until that time comes, I will continue to dislike it. Another trend that also highlights the differences in stories in a negative way is the art, which will continue to change depending on the story. Fortunately, it does seem that artists will remain on a particular Bombshell-arc, so that amount of consistency is good. I do wish, however, that there would be just one artist for the whole run. Perhaps this would make the stories connect better, because right now it seems like three completely different stories with the same writer (though at times it does not feel like it) and the same title. What connects the stories? Why should we care about these different settings? Why do we need to read them all and not be allowed to just choose one story to follow? These are questions that could and should be answered in the storytelling and art. I am getting used to the art changes, but the only art I do not like is within the Joker’s Daughter storyline.

Speaking of which, the Joker’s Daughter storyline seems confused, and because of that, is a little confusing to readers. On the positive end, the occult connection makes historical sense since Hitler was into the occult and dedicated to finding certain occult artifacts. This story also seems to be connected to the monster below the sea (which happened in the first Wonder Woman part), but it certainly is taking a while to make that connection! It is confusing what Tenebrus says to Joker’s Daughter: that he will take orders from her in the name of, presumably, Hitler, so long as the Tenebrae have the dead.  (FYI, tenebrae is Latin for ‘darkness.’)  Why, if this entity and the darkness below the sea are so powerful, would they take commands at all? What ‘dead’ does he speak of? And who is the ‘prince’ that Joker’s Daughter serves, if not this creature? Finally, and perhaps most importantly, who is the Bombshell in this story? Zatanna? She’s not doing much, and while I would like to see a team-up between her and Constantine the rabbit, I feel like this particular storyline has the least substance to it.

The best story continues to be Batwoman. It is certainly introducing the most interesting characters from the DC universe, and it is also the most heartfelt. I am the most engaged and excited to follow Kate, and of course, there is beautiful art! I love the scenes between Kate and Maggie, and you truly feel the pain of separation when Kate leaves to go on her mission. Frankly, if there was a Bombshell collection of just Batwoman, that is what I would be most eager for. The Wonder Woman story is also a slow burn since we spend several pages talking about stars, then several more fighting and showcasing powers that we have already seen Diana exhibit. The best part in the story was the discussion between Mera and Diana regarding identities, and the fact that Diana is just trying to find her own identity. We also finally see a possible link between stories. Since General Lane makes a point of talking to Waller about finding a Bombshell, I continue to have hope that it will all come together.

Besides the disjointed feel of the stories, I can see them slowly inching towards each other. If only for the Batwoman story, I recommend this, but I hold out hope that once stories intersect it will become strong once more.