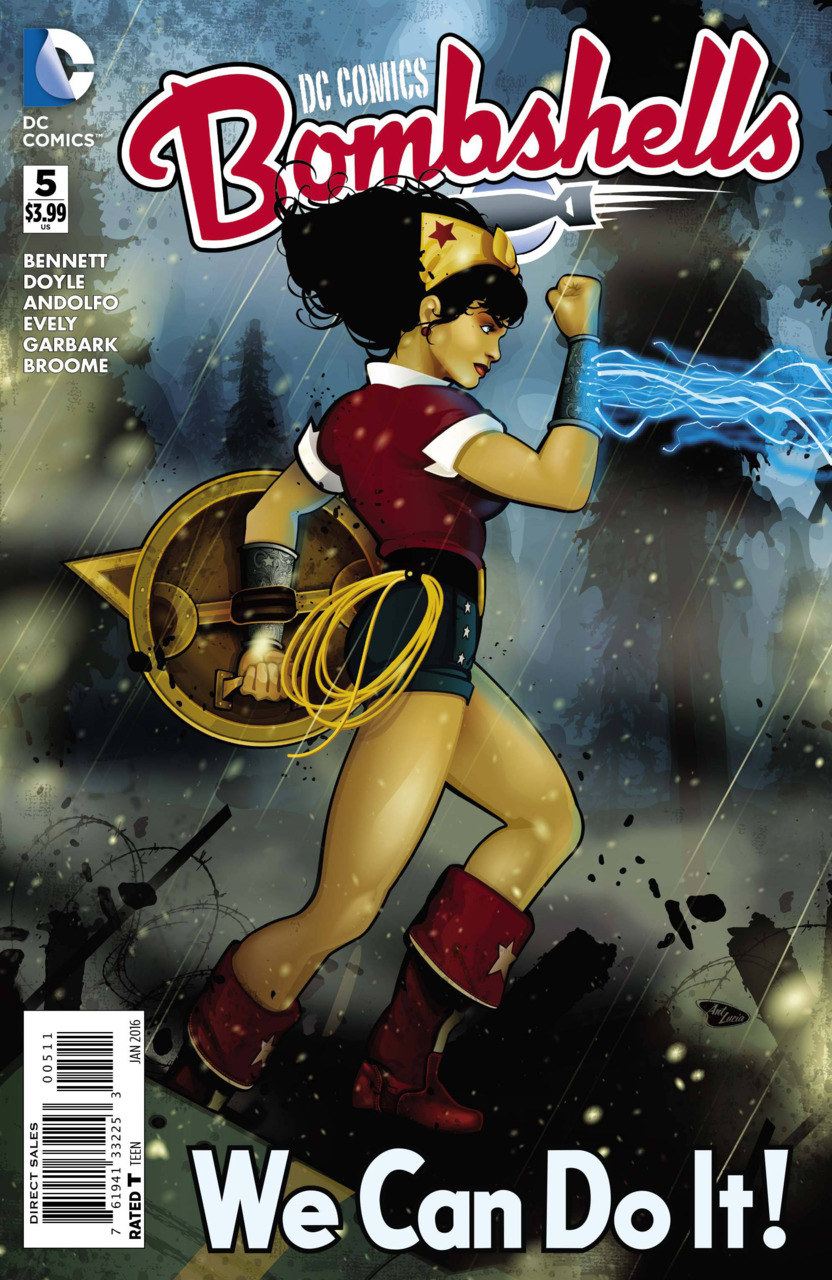 DC Comics Bombshells #5 collects the next three parts of the digital-first series based on the popular DC Collectibles Bombshells statues.

The fifth issue continues the ‘Combat’ storyline. The story is written by Marguerite Bennet, but the artist credits change for each part.

Part 1 (Art by Ming Doyle and Colors by Doug Garbark): Berlin, 1940-Kate Kane provides us with a voice over as if she is writing a letter to Maggie, thinking that she is all alone on this mission from Waller…and what a crazy mission it is. Upon reaching shore, Alexander Luthor meets Kate and explains that he is her contact and will take her to see Selina DiGatti. Upon reaching Selina’s party, Alexander and Selina flirt back and forth with some underlying tension, until Selina steals Kate away to another part of the festivities. Once they are alone, Selina warns Kate about Alexander and escorts her into a back room where there are Nazis, Nazi sympathizers, and Edel Nacht, aka Brother Night. Brother Night reveals a dead Nazi soldier, and while some of the guests are up in arms over a dead compatriot, Joker’s Daughter appears, uses the power of Tenebrus the Binder (which has bound itself to her arm, presumably following her injury in her previous appearance) and awakens the soldier, who then swears an oath to the Third Reich and becomes the first of the Tenebrae. Part 2 (Art by Mirka Andolfo and Colors by Wendy Broome): Calais, France, 1940-Flying over the English Channel, Harley Quinn is shot down by antiaircraft fire then rides a bomb down to the ground where it…doesn’t explode. She has landed in a greenhouse and is met by Pamela Ysley. Harley is super excited to find a potential partner and follows her around to her living quarters. Pamela lives in the lap of luxury, apparently well-paid by a German buyer. Harley shortly annoys Pamela and Pamela turns green, explaining that she lured German soldiers and officers to trust her until she killed them with a deadly perfume, one which changed her as well. Pamela then tells Harley that the Germans have taken France, and to prove the point, several soldiers appear in the greenhouse. Harley arms herself with a wooden mallet, but the Germans shoot the undetonated bomb which then explodes. Pamela and Harley escape and drive away without seeing the dead German soldiers rise again as Tenebrae.

Part 3 (Art by Bilquis Evely and Colors by Wendy Broome): Soviet Prison Camp, 1940-Stargirl and Supergirl find out more about the prisoners inside the camp as well as worry what will happen to their parents now that they will be considered traitors. The duo take the prisoners to their underground compatriots then go to the village of their parents. Everything seems quiet until the girls go to their childhood home and see the Russians and General Arkayn with the girls’ parents. The General speaks of treason and threatens the parents, but they stay strong and encourage their daughters. Suddenly, a forest spirit, a Swamp Thing, bursts through the house and grabs some soldiers, giving the girls a chance to fly their parents away. Kortni believes that since her mother was always devoted to the forest, they heard her need. Unfortunately, the Night Witches also appear and begin shooting at Supergirl and Stargirl. Their father is taken and he begs the girls to leave him. With tears, Kara obeys and the girls with their mother fly away. The fifth issue is this series continues to give readers a mostly positive experience, with fun characters, interesting storylines, and a worthwhile departure from the ‘normal’ status quo of the DCU. This particular issue adds the most characters we have seen in one batch, including Lex Luthor, Selina (Kyle), Swamp Thing, and Poison Ivy.

Luthor was a welcome surprise and one which I did not even consider, but it was confusing how he was worked into the story and perhaps made it a little over complicated. I liked that he was there to pick Kate up, but when we later find out that he is playing both sides of the conflict, it seems like it was complexity for complexity’s sake. The scene with him and Selina is tinged with tension along with the flirting and was well written, albeit possibly unnecessary since we really care about the interaction between Selina and Kate.

This issue finally sees a crossover with another part of the bombshell saga, but where’s Zatanna? Joker’s Daughter seems to actually be serving a purpose, with her actions appearing in more than one section of the issue, but when will the heroes meet up?

I am glad to see Harley as kooky as ever, and I’m glad she found someone that she is close to in ‘normal’ continuity. I do wonder when this particular part occurs in the timeline of this plot since there are more Tenebrae. I thought this was the most fun portion of the story, but it is unclear what Pamela was doing for the axis forces or the allies. Is it possible that we will see her with Selina and create the Bombshell Sirens?

Besides the Kate and Maggie story, I have to say that I enjoy the Supergirl and Stargirl story a great deal, despite its occasionally slow tempo. This story seems to have the most personal struggle, dealing with pressures to do as ordered in order to save their parents or do what they believe is right. Here we see this greatly highlighted, but there are certain story beats that I find unnecessary such as the girls having a pity party inside their parents’ village when it is not appropriate to do so, and Kara not using her powers properly to check her parents’ village. This particular part also took a strange turn with the appearance of Swamp Thing, but it does connect back to Supergirl’s origin and her being found in the woods as an infant. Nevertheless, if you ever wanted a definition of deus ex machine, Swamp Thing is it!

This is another enjoyable issue and I’m beginning to see where some of the story parts could go, but here are two questions to leave you with: How far can you expand the cast without the story getting out of control or being unable to wrap-up loose ends, and What is the best way to introduce characters and when?