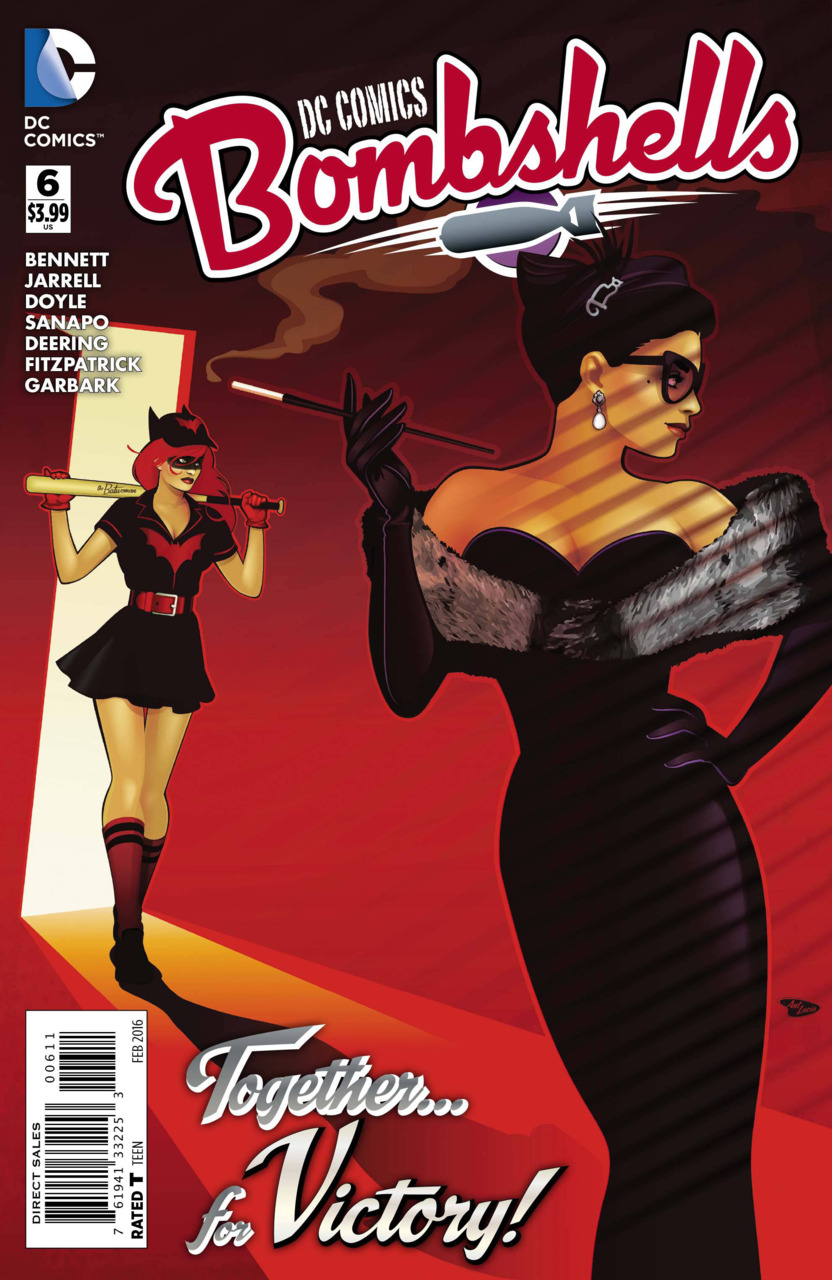 DC Comics Bombshells #6 collects the next three parts of the digital-first series based on the popular DC Collectibles Bombshells statues.

The sixth issue continues the ‘Combat’ storyline. The story is written by Marguerite Bennet, but the artist credits change for each part.

Part 1 (Art by Sandy Jarrell and Colors by Kelly Fitzpatrick): The Atlantic, Disputed Territory, 1940-A submarine carrying Tenebrae is suddenly attacked by Mera (Aquawoman) and a whale. She seems to be enjoying herself as she sings a song and flirts with the seamen aboard the HMS Winston, a British destroyer. She learns of their varying sweethearts and flashes to a dark time for her, when suddenly Stargirl and Supergirl arrive. Mera at first defends the destroyer, thinking that they are hostiles, but once Mera sees that the girls are protecting their mother and each other, they all stop fighting and talk. The girls and their mother are welcomed aboard the ship, and Mera vows to protect them.

Part 2 (Art by Ming Doyle and Colors by Doug Garbark): Berlin, 1940-As Batwoman fights against the Nazis, she narrates a letter to her beloved, Maggie. Kate is able to still use her baseball skills by hitting exploding baseballs onto Nazi tanks. She later finds a club playing swing music that is full of teenagers. Suddenly, a squad of Tenebrae attack the scene, and one of the band members, the guitar player, uses the neck of the guitar as a crossbow and shoots some of the Tenebrae. Her name is Helena, and while Kate finds her fun, she doesn’t ‘do sidekicks anymore.’ Once the Tenebrae are defeated, Kate meets Selena and Lex outside. Helena sneaks inside the trunk, and during the ride, Lex shows Kate a piece of Kryptonite that he says will keep the war ‘human.’

Part 3 (Pencils by Maria-Laura Sanapo, Inks by Marc Deering, and Colors by Wendy Broome): Many Locations, 1940-On the HMS Winston, Aquawoman, Supergirl, and Stargirl talk when Amanda Waller shows up with Big Barda and Dr. Hoshi. Supergirl and Stargirl change their outfits and agree to join the Bombshells.

In Berlin, Brother Night takes Kate with him.

In the Peloponnese in a prison, Wonder Woman refuses to apologize or regret her choices, but she does break out of her cell and take Steve with her.

In France, close to the German border, Harley and Ivy drive through a town and knock around some Nazis.

In Berlin, Zatanna and Constantine-rabbit talk about the current situation and their history. Constantine wants her to rethink her allegiance to Joker’s Daughter, but Zatanna stays with her for a few different reasons. We learn that Constantine is working with Waller as well. Finally, they decide to work together to battle the things that are coming. The best part of this issue is certainly the fact that there are more and more interactions between different Bombshells. As the stories begin to intersect, they become stronger and there are not superfluous elements. The final part of the story is dynamic and fast-paced, but I like it because it hits upon each of the characters, what their purpose will be moving forward, and then ends with a larger piece of the puzzle that has been largely neglected and confused. Here, however, the Constantine-Zatanna story is dealt with well and concludes with a moment that brings unity to the story as a whole.

The art continues to fluctuate for me, and I cannot stop thinking that one artist on all story parts would make the experience stronger. There are moments where the art looks beautiful and others where I do not know what I am looking at. I was disappointed with the design of the Batwoman storyline, mainly because we are told that we are looking at ‘kids’ (at the very least teenagers), and I cannot help but see Helena as an adult. Bette was designed successfully, but here there are flaws. I continue to wonder what the purpose of Lex Luthor is to the story, as well as his relationship with Selina in particular. In the last part that we saw him, we were told that he was not to be trusted because he played both sides. If that were true, why does Selina, and for that matter, Kate, continue to work with him? And speaking of ‘playing both sides,’ what was the point of the ménage a trois joke and discussion? I did not find it amusing, and it was not necessary. I found it out of character, and even though Kate does joke around, I don’t think she would have gone in this direction, nor do I think it necessary to take time out of the story for this story beat. What’s more, the prospect was actually considered, which made me nervous because I was fearful it was actually going to happen. What about Maggie?

As a writing detail, I did think that the Supergirl and Stargirl language barrier was not treated well. At first they are speaking Russian, then they switch to English which is written as if any naturally-born American citizen is speaking, then they suddenly begin to stumble through English. Shouldn’t they have been stumbling all along? This is inconsistent and unrealistic.

Oh, and by the way, why doesn’t Mera have any concerns as to what Wonder Woman is up to or where she is? That relationship seems to have been cut pretty quickly.

Finally, I do want to know more about the relationship and history between Zatanna and Joker’s Daughter. Zatanna says that Joker’s Daughter told her she loves Zatanna, but I can’t tell if they are in some sort of romantic relationship or this is platonically speaking, especially since Zatanna and Constantine seem to have some sort of lover-history.

There is a lot going on in this issue, but the majority of it is treated well, and I’m hoping that the tempo remains high.