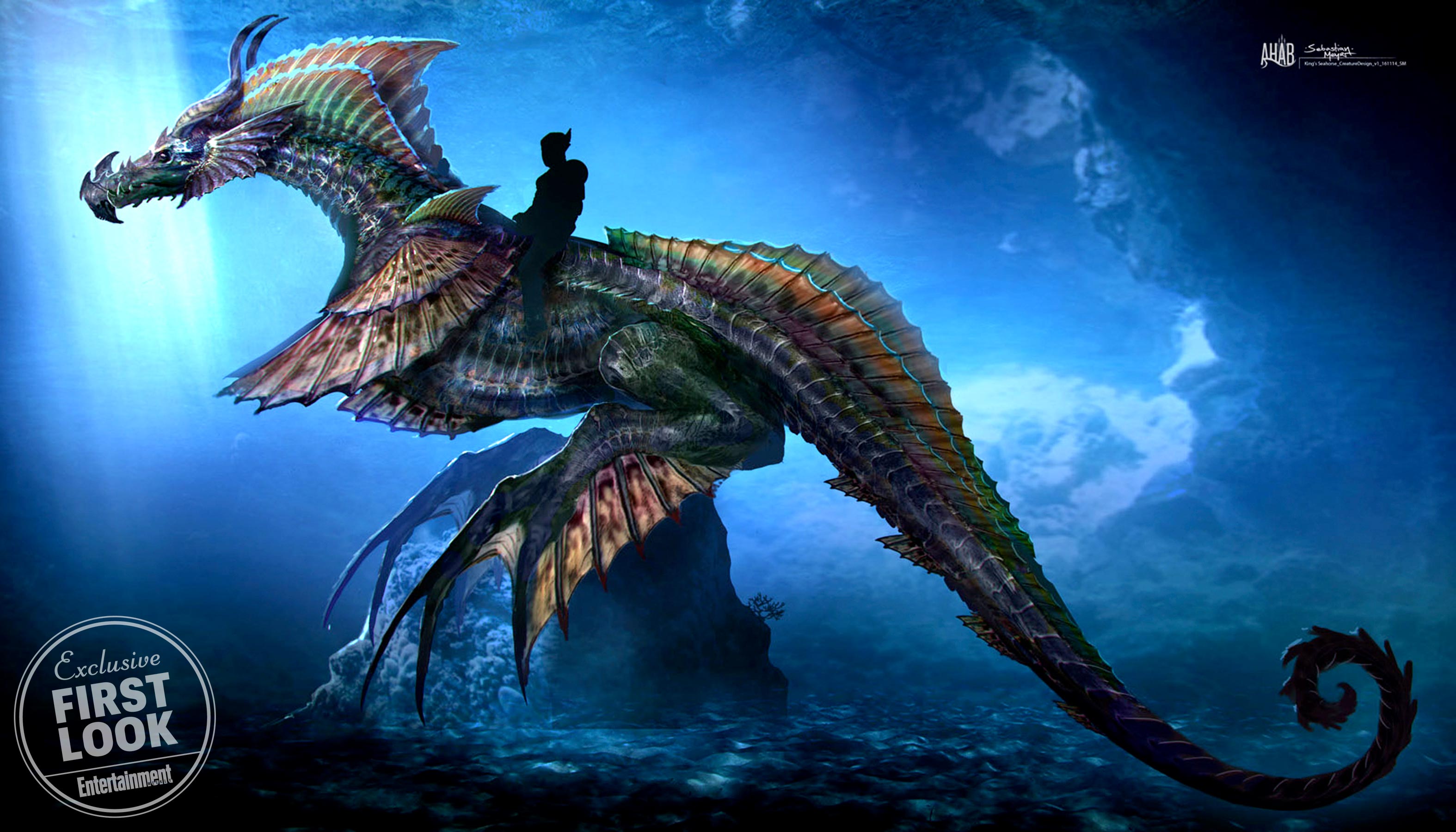 Welcome to this week’s DC Films News and Rumors Weekly Update where we’re washing out Robin’s filthy mouth with soap. This week is jammed pack with news from Aquaman photos to the revealed lineup for the Birds of Prey movie and even a Batman movie rumor. Let’s cut this introduction short and get to the good stuff. Here is the latest update of all of the announcements and rumors that have released from July 13-19. The official poster for Aquaman has been released and features the tagline “Home is Calling.” The poster itself has Aquaman front and center surrounded by all manner of ocean life. I guess he really can talk to fish because getting that shot setup had to be a ton of work. Meanwhile James Wan has shared a photo of the trailer editing process. We can expect to see the trailer this weekend at SDCC.  Continuing on with Aquaman news, James Wan has stated that the film will feature a mix of practical effects and CGI, which shouldn’t come as a surprise to a film set underwater. Wan said via Twitter, “Practical makeup-fx sculpted by @FracturedFX, and digital augmentation and environment by @MPC_Film. (Correction to what I stated before). Lucky to have the top houses working with us on this film.”

Embargoes have been lifted on Aquaman set visits so a ton of new information is coming out. When it comes to set visits, Collider typically has the best collection of tidbits and with fifty things to know about the film, they do not disappoint. Some highlights include:

Djimon Hounsou is set to play the Fisherman King in Aquauman and EW has a photo the how the character looks. Hounsou is doing double duty by showing up in Aquaman while also playing the Wizard in Shazam! Something tells me we’ll see more of his actual face in the latter film. Continuing with characters in the film, Den of Geek has released a special SDCC magazine cover that features both Ocean Master and Black Manta in costume. The characters look to stick closely to their comic book counterparts which should make fans happy. We also got a look at an underwater dragon which is a far cry from the seahorse that Aquaman used to ride in the old cartoons. “The idea was to turn on its head the idea of Aquaman riding a seahorse, take something for which he was mocked and turn it into something terrifying and impressive,” says producer Peter Safran. “He’s a Xebellian creature but I wouldn’t be surprised if we saw Arthur (Jason Momoa) on one at some point…”

The last bit of Aquaman news is the official synopsis according to the film’s website:

From Warner Bros. Pictures and director James Wan comes an action-packed adventure that spans the vast, visually breathtaking underwater world of the seven seas, Aquaman, starring Jason Momoa in the title role. The film reveals the origin story of half-human, half-Atlantean Arthur Curry and takes him on the journey of his lifetime — one that will not only force him to face who he really is, but to discover if he is worthy of who he was born to be … a king.

The Joker origin movie is officially a go starring Joaquin Phoenix and directed by Todd Phillips. The film is currently set for a fall 2019 release date and a budget of $55 million and will officially be called “Joker.” On the film, Phoenix told Collider:

It feels unique, it is its own world in some ways, and maybe, mostly, it scares the f’ing sh– out of me or something. It might as well be the thing that scares you the most… It feels unique, and I think more then anything, and probably the most important thing, is Todd seems very passionate about it and very giving, and so that’s exciting. I think, underneath the excitement of these films, and the size of them, there are these incredible characters that are dealing with real life struggles. And sometimes that is uncovered and exposed, and sometimes it isn’t, and so I always felt, like, there were characters in comics that were really interesting and deserve the opportunity to be kind of studied. And so I think that’s what Todd sees appealing about this idea.

According to Collider, Thomas Wayne is set to have a prominent role in the movie. The site also reported on a rumor that Robert DeNiro may have a role in the movie. While he may be a bit too old to portray a young Thomas Wayne, his role could still be pivotal in how the Joker is made. Meanwhile, Zazie Beetz (Deadpool 2) is currently in talks to join the cast of the film. Like DeNiro, she’s not attached to a certain character but it would be interesting to potentially see her as the Joker’s wife as she appeared in the Killing Joke. EW has released a new photo from Shazam! featuring the titular hero with fellow orphan Freddie Freeman pressing the glowing lighting bolt on Shazam’s chest. EW also released a special Comic Con issue of their magazine which features a cover of the hero blowing a bubble while texting on his phone. Photos like this serve to highlight the lighter tone of the film which will hopefully be seen in the final cut. We might not have long to wait to see Zachary Levi in action as the film’s cinematographer has hinted that the trailer for the film may debut at SDCC this weekend. This combined with a recent leak of footage shown on an Instagram account points to footage coming soon.  Just don’t expect a cameo from Dwayne Johnson as Black Adam. He recently told SyFy, “I’m not in that one. It’s Shazam and Black Adam and, with the way the DC universe works, we should — in theory — meet up on the big screen. But who knows.” We’ve also got our first luck at Asher Angel as Billy Batson in the film thanks to EW. The actor told the magazine about Batson, “he’s misunderstood, he’s mischievous, he’s been a foster kid since he was 5 years old and really has no one to trust.” As for saying that one important word, Angel said “oh my god, I can’t even tell you how many times I practiced saying it! My family and friends are asking if I’ll ever get sick of saying ‘Shazam!’ I’ll never be sick of it. Ever.”

As for seeing Shazam show up in a Justice League film, producer Peter Safran said, “I wouldn’t be surprised to see Shazam play a role in the DCU. He exists in that world.” He might fit into the team pretty well and provide an added bit of levity alongside The Flash.

While we’ve yet to see Kristen Wiig in her full Cheetah costume, a few set photos and videos have been released showing the actress in action. She is able to perform huge leaps while seemingly in her human form so we may see Wiig’s version of the character able to change between her two forms. They haven’t stated if her cheetah form will be created via CGI or practical makeup effects but I’m holding out hope for the latter. We may have seen a glimpse of the character thanks to concept art appearing in a recently leaked promotional video. We can’t say for certain if this will be her actual look but it could be a hint in that direction.

The roster for Birds of Prey has possibly been revealed according to a report on The Wrap. Black Canary, Huntress, Cassandra Cain, and Renee Montoya will join Harley Quinn in the film. It’s interesting that they’re going with Cass instead of Barbara Gordon, though we haven’t heard one way or the other that Babs won’t be in the film, perhaps in her Oracle persona.

On to a bit of Batman movie news. There is a rumor going around that The Penguin may be the villain of the film. The Wrap’s Umberto Gonzalez posted on Twitter, “DC NUGGET: The villain in BIRDS OF PREY was originally THE PENGUIN, but that is no longer the case. Gee, I wonder what other DC movie Oswald Cobblepot can be the bad guy in?” This remains just a rumor at this point so take it with a grain of salt. Along with the Penguin, rumor is one that the Court of Owls will be the true antagonists of the film.

According to Revenge of the Fans, contract negotiations between Henry Cavill and DC has been a bit tricky. The actor is signed on for four films meaning he has one movie left in his contract. As for if he’ll continue on, it’s anybody’s guess. Warner Bros. and DC are disappointed that Superman is not the box office draw they thought he would be. Meanwhile, Cavill has hired new representation that is pushing him into the spotlight in hopes of turning him into an A-list star. That means that Cavill will want more money from Warner Bros. to continue on in the role while also having greater creative input into the making of the films. Warner Bros. meanwhile is interested in how Cavill is received in the new Mission: Impossible film before offering up a new deal. The site also posits that the reason Cavill has been mentioning his role as Superman so much lately is to gain audience support of him continuing on in the role. It’s all tangled web so we’ll have to wait and see how it all plays out.

Finally some villain rumors for Suicide Squad 2. Apparently at one time, potential villains from the film could have been Raven, Zatanna, and Kara Zoe-El. All were ruled out in favor of having Amazo serve as a “weapon of mass destruction” that the squad must stop. With Amazo’s ability to replicate the powers of those he fights it will make him more than a match for the team.

Whew! What a week. With SDCC this weekend we can expect a whole heap of movie news to come out so be sure to check back here all weekend as well as next week’s column for the full rundown.