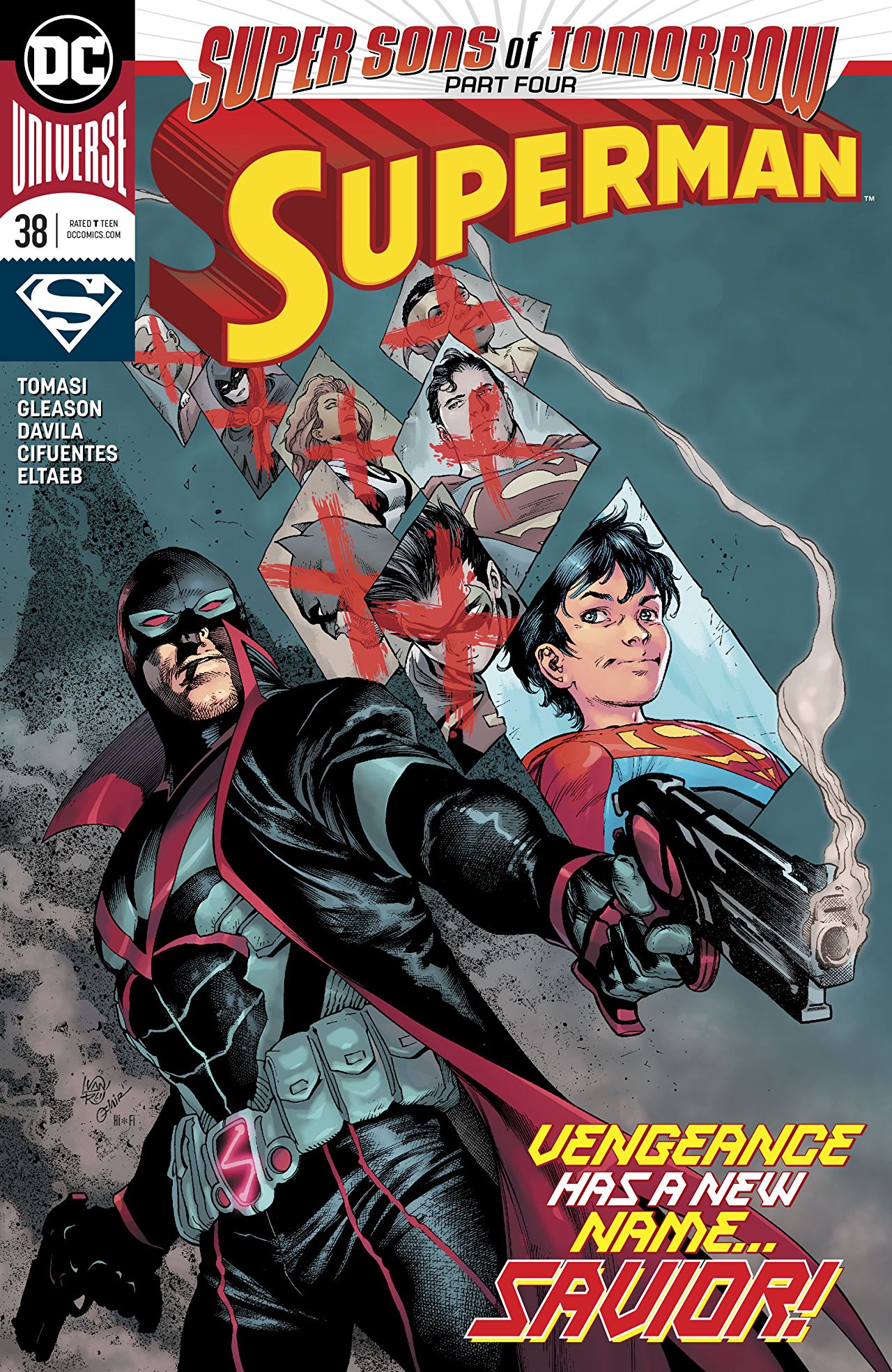 Overview: After Superboy and Robin are tracked down by a faction of the Teen Titans, they decide to head to the Fortress of Solitude for more assistance. Despite another solar flare blast from Superboy while there, Future Tim decides to sacrifice himself after seeing the current and future Teen Titans working together.

Editor’s Note: This is the fourth part of the Super Sons of Tomorrow crossover that takes place in many TBU titles. The story started in Superman #37, Super Sons #11 and Teen Titans #15 and concludes in Super Sons #12 which releases in two weeks.

Synopsis (spoilers ahead): Immediately following Raven’s teleportation move, the rest of the Teen Titans that would not join Future Tim (AKA Savior) close in on Damian’s location. Due to the radiation that Superboy is emitting, Aqualad is able to find the hidden headquarters under the ocean. As they approach the base, the boys are inside suiting up and discussing their next movie. Damian states that Future Tim’s future saw Superboy causing a catastrophic solar flare, but not why he did it. Before the boys can discuss this further, their teammates burst in and a fight ensues. Eventually Robin and Superboy are calmed down enough to talk. Starfire, Aqualad and Kid Flash tell them that they are on their side, but they need to have the boys unconscious so that Raven can not track them. Despite Robin’s complaints, Superboy knocks Damian and himself out after giving Starfire the coordinates to the Fortress of Solitude.

Waking up at the Fortress of Solitude, Superboy sees the damage that was done by Superman’s fight with Future Tim. It does not take long for Jon to find Superman in his red Kryptonite cell that Tim imprisoned him in. Jon begins to pummel the pod against Clark’s pleas. The slightest cracks begin to even weaken Jon so Superman orders the team to pull his son back and sink the pod along with himself into the ocean. As much as he struggles, Jon sees Aqualad carry out the order and loses control seeing his father being sunk into the ocean. As his solar flare builds, Raven and Beast Boy arrive with Future Tim. Future Tim states that this blast could kill Jon as he is half human and not strong enough to withstand another solar flare. Immediately following their arrival, the future Titans appear with the chronol-energy-infused hand of Future Tim. No sooner than they arrive than does Cassie throw her lasso around the solar flare and tells the entire team to put aside their differences and help their friend. Emerging from the ice, Superman begins to shout orders to the future and current Titans.

Meanwhile, Future Tim is reunited with his severed hand but begins to be drawn to the future by the time stream. Damian attacks him and blames him for everything that has happened to Jon. Tim is shocked and amazed by the team work and sacrifice he sees as both current and future Superman rush into the flare to try and save Jon. He tells his Titans that he is beyond saving but orders them to redirect the solar flare at him. He takes the full brunt of the blast and disappears in a flash.

Following the explosion, Superman embraces his son and acknowledges Future Tim’s sacrifice. The issue ends with Future Tim floating through the time stream, seemingly at peace.

Analysis: Although the crossover remains incomplete, the apparent climax we got here had a lot of positives to take away. Both dialogue and art delivered a big action set piece that hopefully will resolve itself in the conclusion to the event.

One particular aspect of the art stood out to me and that was the overall panel layout. It created a very dynamic and smooth flow to the direction of the issue. Along with that there were specific splash pages that really caught my eye in which we saw characters in the time stream like the future Titans or the last page of Future Tim floating through time. We get to see nods to certain iconic moments of DC’s history along with more current events that have not even been defined in the current time line (ex. Dark Nights Metal).

The story itself continues on the path from the previous issue so there really was not a big focus on Superman, but we did get to see Jon’s attachment to Clark being this trigger point that could result in Future Tim’s timeline coming true. No major character development happened among the main teams involved, but we did get to see Future Tim sacrifice himself for the greater good. Although not seemingly dead, there was a nice closure to seeing this paranoid, obsessed Tim Drake finally getting the peace he needed.

Final Thoughts: I admit that I was surprised that there was still another issue to conclude this crossover, so I am interested to see how they will end this event. I do hope that Future Tim is not drawn back to the current timeline as he seems to be “out of the picture” in a way. The only development I could see with Tim would be coming face to face with Dr. Manhattan and that this is somehow connected to Doomsday Clock. I am looking forward to the concluding issue in this event.