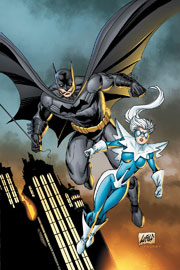 Hawk and Dove #6 is the third to last issue in this run, written and drawn by Rob Liefeld. This issue promised an appearance by Batman and did not disappoint. Hawk appears first, on the run over rooftops in Gotham. It turns out the man he's running from is Blockbuster. Hawk lists his advantages, but he realizes that Blockbuster is relentless, and so Hawk is going to have to take the fight to him.

Though Hawk pummels him, there seems to be little effect, and he prays for Dove to show up. She does, and not a moment too soon. She was busy saving police from their flipped squad car, courtesy of Blockbuster. The villain appears to be after an amulet that Hawk is wearing around his neck, Hawk starts to continue the chase but is knocked down very quickly.

And who brought down the Avatar of War? None other than Robin. They start to grapple, but Dove puts a stop to it right away. It turns out they're working the same case. Both are on the trail of the Necklace of Ra; Batman because it's the latest in a string of artifacts to go missing, Hawk and Dove because it had been taken from the Smithsonian in Washington.

Batman appears and tells them it's fortunate their powers are supernatural in origin, because the ringleader searching for the artifacts is calling herself The Necromancer. Hawk and Robin peck at each other, while Batman explains the case. He tells them all that Necromancer is searching for these artifacts as a way to gain access to another realm, with the fallout extending past Gotham. He allows Hawk and Dove to stay on the condition they understand it's his city and his rules.

Hawk marvels over the opportunity to learn from Batman, but wonders if the Dynamic Duos can make a Fantastic Foursome. They track the necklace and Blockbuster to the wharf, where he is handing over the amulet to the Necromancer.

She revels in the power she does not yet possess when the foursome come crashing in. Hawk and Dove both take time to admire Batman and Robin's fighting moves, respectively matched against Blockbuster and Necromancer. Dove disrupts the circle while Robin has Necromancer pinned. As the spell is broken, the four combine efforts to take down Blockbuster. With a one-two, Batman and Hawk manage to take him down, but Necromancer escapes. They stay for the cleanup and watch the sunrise over Gotham.

Batman says they have great potential and he hopes they survive long enough to maximize, but then he tells them they must learn to blend their powers and initiatives. And with the end of the mini-lecture, Hawk and Dove head back to D.C.

So, another issue down, another issue closer to the end. This story served as a nice break from the regular shenanigans of Hawk and Dove, but it feels wrong to have a filler issue such as this one when we know the story ends in two issues. This could have been used to flesh out the story that has already been going on. The proclamation from Batman about surviving long enough to maximize their potential is especially bittersweet, with the cancellation.

The art was good, and it was interesting to see Rob Liefeld's interpretation of Batman and Robin. I might not have cared for his interpretation of them in dialogue, but they were well-rendered, if a little off from what we're seeing in other issues. This Robin seemed to be more based on pre-boot Tim Drake than re-boot Damian Wayne. Minor technicalities aside, this issue was well-drawn.