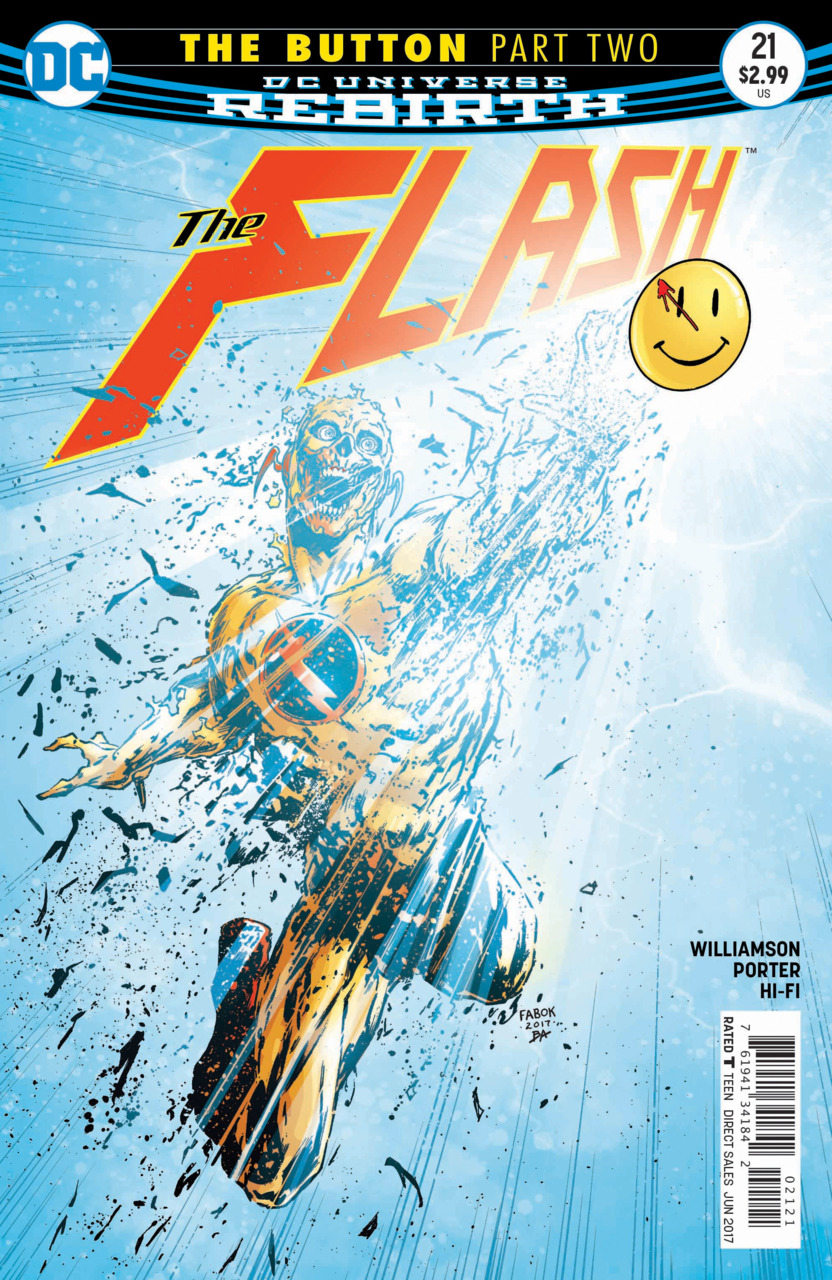 We may not be getting all the answers, but the powers that be sure are teasing us. The Flash #21 is the second installment of the long-anticipated story “The Button,” wherein one assumes we will be getting updates on several ongoing Rebirth plot threads.  Last issue, Batman #21, caught us up on where the famed button of Watchmen legacy is, as well as where Saturn Girl from the Legion of Superheroes is spending her time in the present.  Here, we get another glimpse of Johnny Thunder’s situation.  He is still without Thunderbolt and still trying to invoke his power with the magic words “cei-u.”  Also, he is lamenting that he is the reason the Justice Society has been lost.  Just a quick, one page catch-up that was a nice tease.  From here we dig right back into the main plot where an powerful, unknown force just killed Flash villain Eobard Thawne.

Flash and Batman is a team-up we don’t see often enough.  The two come from very different worlds, but their similarities play well off one another.  As Flash tears through the evidence from the scene of Batman’s severe beating and Thawne’s death he remarks on what brings them together – forensics and evidence.  Showing his skills as a forensic scientist, Flash is able to recreate almost the entire battle between Batman and Thawne, this time we get a wide enough scope to see exactly how extensive the damage to the Batcave was.  Beyond the immediate physical evidence, Flash is unable to turn up much other than a painful awareness that something isn’t right.  Batman is recovering from his injuries, but is still wanting to stay in the game.  The pair discuss the events of the evening, Bruce even reaching out to Barry to touch on the death of Barry’s mother’s murderer and how that makes him feel.  It’s a very nice moment and reminds us that at the core, the Justice League members are friends.  Something that’s been missing in the past several years.  Flash also reveals one last bit of information that may prove useful.  He had a Speed Force related vision of Mercury’s helmet that filled him with hope.  While he doesn’t understand it at all, the reader knows full well what’s going on.  The helmet is that of Jay Garrick, the Golden Age Flash who, along with the rest of the Justice Society, has been noticeably absent from the main DC universe the past several years.

As superheroes tend to do, Flash doesn’t tell Batman everything.  Thawne’s corpse showed the same traces of radiation that are present on the button.  Thawne was able to travel to the source of that unknown radiation.  Flash then decides to make the obvious choice of doing the exact same thing since it worked out well for Thawne.  Only, without Thawne’s increased power he’s going to need a boost.  He heads to the Hall of Lost and Found, where the League keeps various artifacts that shouldn’t be loose in the world.  This page is full of greatness.  I won’t spoil anything here.  Look around, because this scene is worth the price of admission alone.  The object Flash is after, though, is the Cosmic Treadmill.  As he starts up the treadmill Batman arrives because, of course, he had alarms on the facility.  He gently lets Flash know that this isn’t up for discussion – they’re going together.  The treadmill takes them outside of time and reality for a moment and they are able to see the past – what they think of as an alternate reality.  Things that never happened to them, included the Golden Age forming of the Justice League and Batman’s vision of Barry Allen’s warning from Crisis on Infinite Earths.  Flash, however, realizes these are moments from their reality that we stolen when the universe was remade after Flashpoint.  A storm of sorts forces them to end their journey, however, and they are plunked back into the Batcave.  However, when Thomas Wayne shows up they realize that they have been deposited back in Flashpoint.

I try to refrain from wanton fanboy behavior.  I really do.  But, some things get me going.  As a lifelong DC fan there are certain keywords and moments that bring joy to me.  “The Button,” and Rebirth in general, have brought a lot of those moments back to me.   Seeing events from Crisis on Infinite Earths, however, puts me over the edge.  Rationality is out the window.  I’m invested.  That’s not to say that’s the pinnacle of this issue.  Joshua Williamson’s run on Flash has been good, but this issue pushes towards greatness.  Under normal circumstances I’d be critical of an issue that slows down so soon in a story arc, especially after the unbelievably rapid pace of Batman #21.  Williamson, however, handles himself wonderfully.  We slow down enough that we can take in the events from the previous issue while still building some forward momentum.  It’s a difficult balance to strike, but Williamson nails it here.  I’m always worried about multiple writers being involved in story arcs, but the different approaches have kept things fluid for these first two installments.  The supervising hand of Geoff Johns helped a little as well, I’m sure.

Howard Porter’s art has some great moments, especially the first few pages showing Flash’s forensic analysis of the Batcave.  Stylistically he has a good approach and solid layouts.  I would like to see some variety in facial features, however.  Everyone seems to have the same dumbfounded expression the whole issue, regardless of what’s happening.  I can’t say I’ll ever be a fan of the tendency to draw Flash with residual energy around him even when he’s static, but here it isn’t terribly annoying.  That may owe a great deal to Hi-Fi’s colors, which really work well on the Flash.  His vibrancy is on point throughout the issue, especially in its stark contrast to the monotone Batman, which is dangerously flirting with being overplayed.

I needed this issue.  While covering a story with an inherent gravity, this issue reminded me of how fun comics can be.  I still can’t wait to see what’s coming next.