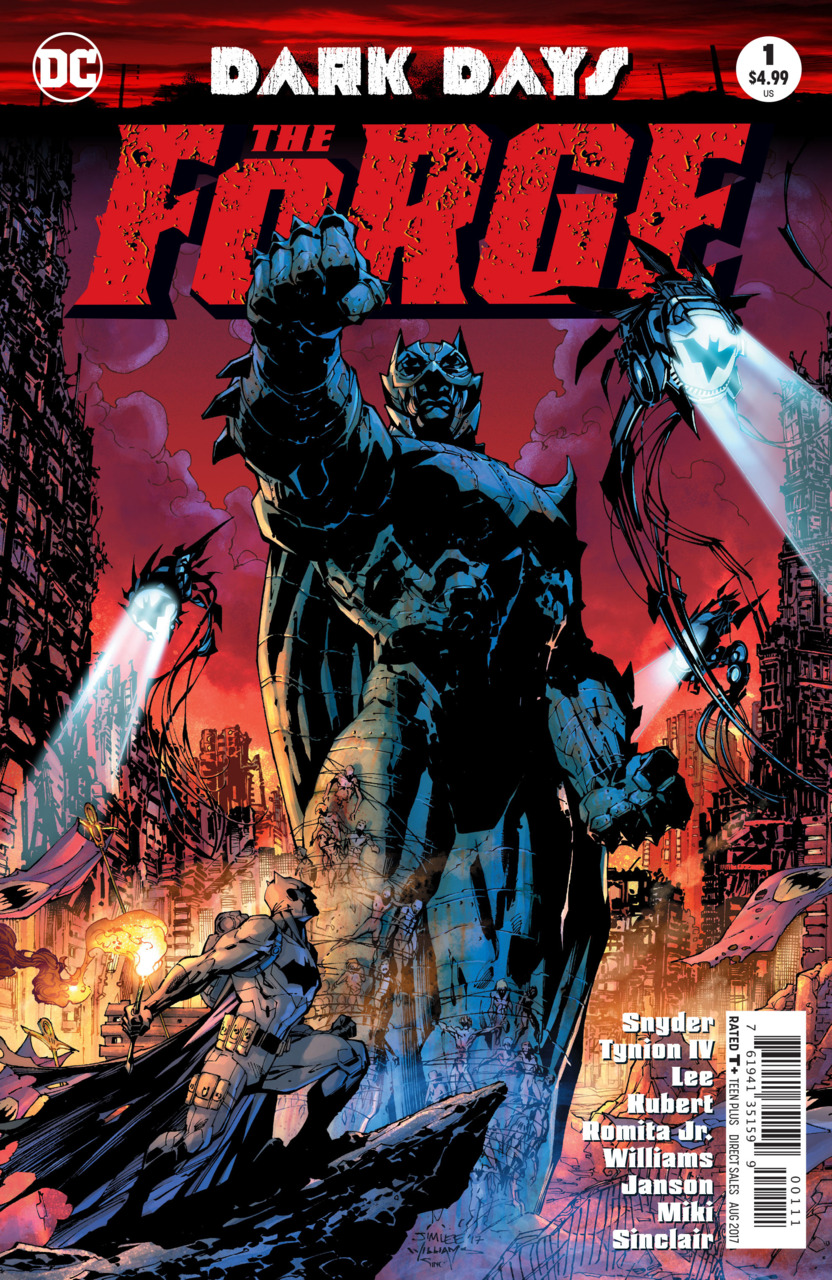 Synopsis (Spoilers): We open in ancient Egypt with Carter Hall along with other horsemen, as they ride toward something… a metal ship falling out of the sky.

Currently, in the Bermuda Triangle, a scientist is working in a lab on an island, however he is recording what they have discovered before he and everyone else is about to be killed by a volcano. Batman breaks through the wall in a giant robot suit, and tells him, “COME WITH ME IF YOU WANT TO LIVE!” He jumps in and they swim out through the lava under the surface of the ocean. Aquaman comes through, and saves the scientist as Batman goes back for the data stored in the recording. Once he surfaces, Arthur asks Batman what he is hiding from him. The lab was owned by Wayne Enterprises, but was kept off the books. Batman knows he has something locked underneath Atlantis, but doesn’t reveal to us what it is. He asks Arthur what THEY are hiding, referring to the Blackhawks, as an invisible jet hovers over them, and then flies away.

On Mogo, one of the Guardians is giving Hal a private mission on Earth. He must keep it quiet, but that something terrible is making its way there. He gives him coordinates to a location that Hal recognizes… Wayne Manor. He makes his way into the Batcave, but is attacked by Duke, who ends up telling Hal his actual name and admits that he doesn’t have a code name yet. Duke tells him that he was given strict orders by Batman that no one was allowed in the cave, not even family. Hal scans the area, and finds an opening. Duke follows him through.

Meanwhile, in “The Campus” the Immortal Man is showing a man in a green hoodie video of Dukes mother, explaining how she “reactivated” recently, but with her being Jokerized, she hasn’t been able to reveal any information. He talks about an upcoming crisis, and how it will be up to the Immoral Men to preserve mankind, as we see a group of superpowered beings.

Carter Hall continues to explain how he works. He’s a treasure hunter, he finds a special metal, he turns into Hawkman, finds Hawkgirl, they fight a dude called Hath-Set, they die, are reborn, and start the process over again. But he’s been having a nightmare recently. One that comes through the metal. He sees a giant statue of Batman, with spotlights shining down while bloody naked bodies are tied to the legs of the statue.

Batman goes to a Batcave he has on the moon, and Mr. Terrific is waiting for him. He transfers the data he’s collected from Earth 2. They hash out the problems they’ve had with a machine they are working on together. Mr. Terrific compares it to a compass. Batman has been using a person to power the machine, and he’s going to let him out… It’s a red canister with black rings around the middle and a yellow diamond… I’m sure that’s supposed to be something, I’m just not sure what.

Back in the Batcave, Green Lantern and Duke make their way and begin to hear a voice. GL tries to get information via the ring, but is loosing signal. The voice talks about the Electrum that allowed the Talons to come back, as well as showcase various other metals of the DCU; the Helm of Fate, Aquaman’s trident, Wonder Woman’s gauntlets… and GL’s ring starts to burn. They find out that Batman has a Black-Ops team that he kept secret from everyone. The Outsiders. They find a vile of Dionesium and the voice continues to explain things as well as mock them.

Carter Hall finds pieces of stone that tell the story of the first men to walk the Earth… three tribes; wolf, bear, bird… and a fourth… a bat.

Batman arrives at the Fortress of Solitude, and talks to Superman about the room he let him have there. He needs to access it. Superman tells him that no one from this world has the ability to open it… but that’s why Bruce called Mr. Miracle. He ends up opening it, freaks out, calls Bruce stupid for keeping it, tells him to turn back, and teleports out of there. Batman has perfected his compass. He asks it to track the dimensional frequency of the dark energy.

In the Batcave, Duke and Hal find the voice of the person who’s been talking to them all along. It’s Joker, he’s writing a series of numbers on the wall, and tells them that they are all just a few pieces in Batman’s puzzle.

Analysis: As far as story goes, I like how big this story feels. It’s stretching out the DC Universe in a way that hasn’t been felt since pre-Flashpoint. Snyder and Tynion do a great job of working with many characters across the universe and nailing their voices. As far as preludes go, this did its job of leaking interest for the main series, but it just leaves you with many more questions than answers by book’s end.

In terms of art, this book is all over the place. It’s like they wanted to get big names on the book as opposed to getting people who actually matched up well together. The book opens with Andy Kubert with Klaus Janson, and as we jump through time, they completely change their style, but it just looks sloppy for the most part. Batman looks great in the shadows, but otherwise looks two-dimensional. Then we transition to Jim Lee with Scott Williams, and their stuff looks great together. They even made me kinda like Duke’s costume, even though I still don’t know why Duke is here instead of Robin. And then we get John Romita Jr. with Danny Miki, who’s stuff looks great in sequential form, but that full page spread doesn’t work to Romita’s strengths. The problem here is the constant shifting between these three art teams. It’s jarring, especially when it changes in the same scene.

I usually don’t care for Jeremiah Skipper’s colors, but with he and Alex Sinclair working together on this, it works very well. Their style blends together well, creating a nice, cohesive feel. Steve Wanda letters this, and gets to play with the font a little more than usual. His Joker laugh looks great, as well as the title card. He does great, as always.

Pick Up or Pass: I’d pick this up. I’m looking forward to Capullo’s return with a bonkers Snyder story.

In Conclusion: Although there are some art problems, the story seems dense enough to capture your imagination… This is going to be fun.