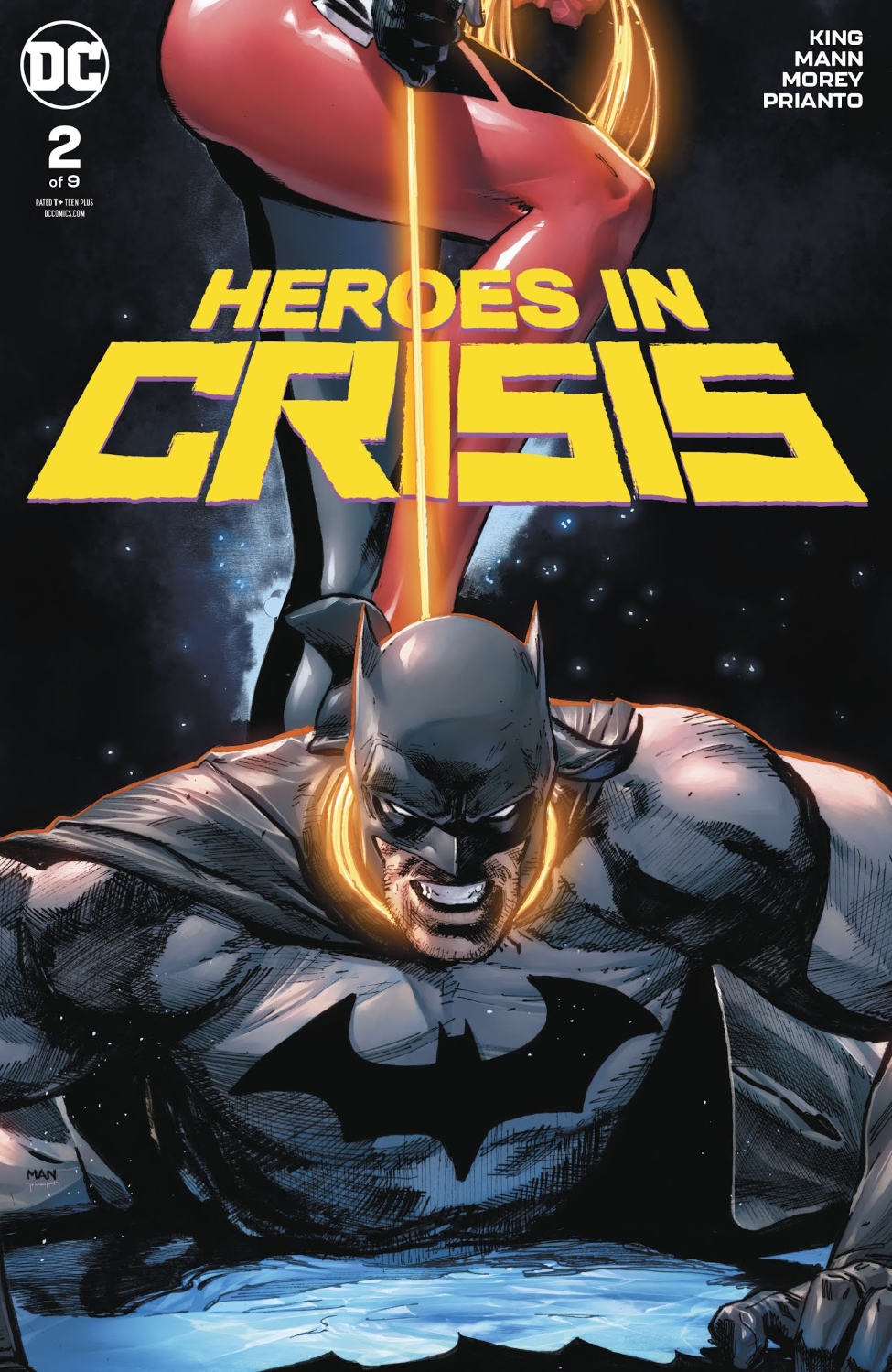 Overview: The investigation over what happened at Sanctuary is underway as Harley and Booster try to do what they think is best.

Synopsis (spoilers ahead): The issue opens with Ivy doing a session at Sanctuary that is playfully interrupted by Harley Quinn.

In the present, Harley goes to visit Penguin to ask for sanctuary because “everyone” is coming for her.

Batman performs an autopsy on Commander Steel as Superman and Wonder Woman observe.  They both ask Batman about who killed the people and if he built a backdoor in the program to spy on everyone’s weaknesses.  Batman insists he did not and that he has no idea.  Batman’s autopsy reveals that Commander Steel was forced to swallow a set of fake teeth.

We see Batman doing a session in Sanctuary where he expresses sadness over how many of his partners have died.

In the middle of a field, Booster regains consciousness and finds out that Skeets is responsible for healing him.  Booster gives Skeets a recap of what happened that leaves Skeets speechless.

Harley is in a warehouse playing cards with a penguin when Batman, Superman and Wonder Woman appear.  She tells them that she intentionally went to Cobblepot because she knew it would mean they find her faster.  She tells Wonder Woman that it was Booster who killed everyone and that she killed Booster for it.  As she says this, she grabs Wonder Woman’s lasso and manages to restrain Batman with it.  Under the influence of the lasso, Batman reveals where he keeps the kryptonite in his pouch.  Harley uses the kryptonite to make her exit and tells them again that Booster did it.

Booster is flying over Midwestern fields debating with Skeets over what he should do.  Skeets says that Booster should turn himself in, but Booster wants to solve the crime.

We flashback to a session with Wonder Woman at Sanctuary where she talks candidly about an incident she had with nightmares as a child and how that impacts her worldview today.

Booster goes to enlist the Flash’s help with the case because Flash is a CSI who knows about crime scenes.  Flash did not know about what happened at Sanctuary and punches Booster in a mix of anger and sadness.

Back at the warehouse, Superman takes off in a hurry because he sees Flash about to do something to Booster.

Harley stands atop a bridge and drops a rose into the waters below as she laments many of the things in her past.

At the Daily Planet, someone brings Lois a cryptic message about Sanctuary from the whistleblower drop that gets her attention.

The issue concludes with a session of Superman at Sanctuary where he talks about trying to reconcile both his identities.

Analysis: It is really hard to assign a rating to this book because so much is still yet to be determined.  I was convinced after the first issue that all this was real, but after this issue, I’m more open to thinking that this is possibly an Inception-style simulation to help people overcome trauma.  Another example would be the great training exercise episode of the Young Justice tv show.  What made me less certain this is real is how unsure Booster seems to be about everything.  On the other side, Harley seems utterly convinced about what happened but she isn’t the most reliable narrator even in the best of circumstances.  There was an issue in another series that had a funeral for Roy, indicating that this is all real, but that could always be retroactively labeled as part of the simulation.  A convincing argument could be made either way about this being real or not.  The truth is we don’t know for sure, so I will instead focus on what does happen in this issue.  All I will say is that I still lean towards all this being real.

The nine-panel pages of sessions at the Sanctuary are present again in this issue.  While they don’t connect as directly to what is happening on the previous or following page as they did in the first issue, they still have an enormous impact on the story.  Through these sessions, we see that both “heroes” and “villains” are all struggling with something.  Showing our favorite characters talking candidly about their fears and insecurities is a great way to humanize them even more and make them more relatable.  I found all of them to be very well written, although I think the Batman session could have had more to it.  Then again, Batman isn’t the most loquacious person so it’s not out of character for him to not be talkative.  Wonder Woman’s session was an excellent way to show, for lack of a better term, “hero guilt”.  These heroes see so many problems on a daily basis that it becomes easy to trivialize their own issues even though those issues still deserve attention.

That being said, the most emotionally wrenching part of this issue for me was the page with Harley standing on top of the bridge.  I feel like this page so succinctly captures so much of the adversity this character has faced over the years.  It’s interesting that Harley talks like she’s trying to work her way out of a metaphoric hole but she paradoxically physically stands at an elevated height as she says this.  The panels where Harley playfully interrupts Ivy’s session makes her regret seem even more poignant here.  The ending is so powerful that it speaks for itself, “I shouldn’t have let anyone change me.  I shouldn’t have let anyone hurt me”.

The big cliffhanger here is Lois’ reaction to the name “The Puddlers”.  In issue #1, “The Puddlers” was scrawled across the wall in Sanctuary over all the dead bodies and it seems to be the name of the android family programmed to operate Sanctuary.  Lois’ role or association with Sanctuary is still unknown, but I bet the best journalist in the DC Universe will play some part in this story before it is all over.

I think Batman will also have a moment of reckoning sometime soon.  He lied to Superman and Wonder Woman about having kryptonite in his belt and this isn’t the first time he has done something like this.  Everyone generally accepts that this is who he is, but with the stakes this high, it might be time for him to get over his paranoia and put his trust in his Justice League teammates.  After all, Superman and Wonder Woman might be the most trustworthy people in the DC Universe.

I confess I am no great expert on art so I may not be able to catch all the subtle technical flourishes, but you don’t need to be an expert to know how art makes you feel.  I have nothing but effusive praise for this art team.  They continue to do an amazing job in bringing these characters to life and they are a great fit for this story.  All the characters seem larger than life, almost like modern mythological figures.  Everything from the art to the colors, to the lettering, is phenomenally handled.

Final Thoughts: The plot thickens as we continue to get candid looks into the minds of our favorite characters.  King continues to explore what being a “hero” or “villain” really means and it is all rendered with beautiful artwork from the art team.