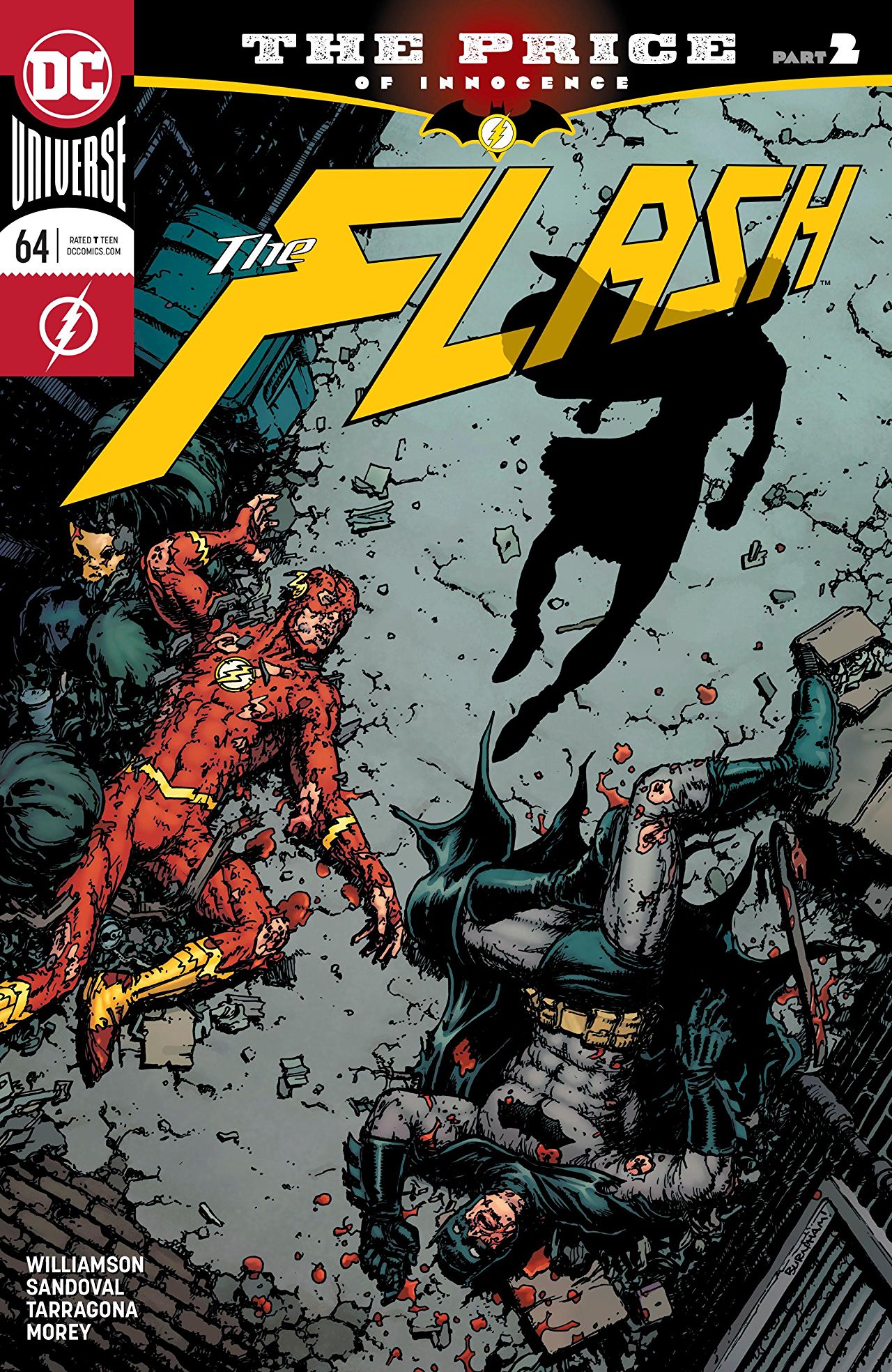 Overview: Batman and Flash track Gotham Girl to her secret base, discovering how far she’s gone to resurrect her brother.

Editor’s Note: While we obviously don’t normally cover The Flash, if you haven’t been keeping up with the happenings amongst the comics we cover, this issue is the second part of a four-part crossover between Batman and The Flash. Last week’s Batman #64 started the crossover and it will continue next week with Batman #65. TBU will cover the issues of The Flash associated with the crossover in order to cover the entire story involving Gotham Girl.

Synopsis (spoilers ahead): The issue opens with the ominous title card, “…It’s better to burn out…”

Gotham Girl (Claire Clover) tells what appears to be her brother, the supposedly deceased Gotham (Hank Clover) about her plan to teach the Flash a lesson, but Hank begs for help. Claire looks to an unseen person holding a huge vial of some chemical, asking to be a hero with her brother again. She blames Batman for leaving her and says that the huge figure with red eyes was with her when everyone else left promising that she’ll be the greatest hero of all time in saving her brother.

At the Flash Museum, where Gotham Girl attacked, forcing Batman and Flash to intervene, the two heroes investigate. They find a plant clue pointing them to the Caribbean, and race in the Batwing and Flash’s super speed. Both still struggle with Wally’s death at Sanctuary.

On a remote Caribbean island, they find footprints leading to a giant castle. As they prepare to infiltrate, Flash asks about Batman’s marriage, not having heard that Selina has left. Before Batman can break the news to Barry, Flash gets a call from Iris, since they’d planned to talk to Wallace about Wally’s death together. She also tells Flash to express her anger at Batman, and Barry deflects both Iris and Batman, choosing to focus on the infiltration to avoid the confrontations.

They find a room covered in pictures of superheroes and Batman gives Flash a rundown of Gotham and Gotham Girl’s history. Flash notes that Claire has an obsession similar to Reverse-Flash, but Batman says Claire wanted to be a hero, not an insane villain, but he discouraged her. Flash angrily says that Batman keeps trying to decide for other people, grieving when he sees a picture Claire drew of herself in her costume as a child and remembers Wally when he first designed his own costume. That memory triggers a question from Barry – who designed Gotham and Gotham Girl’s costumes? Batman never got around to investigating the source of their powers and gear.

The two continue walking, finding a chamber of cryogenic tubes containing dead copies of Gotham and Gotham Girl. Flash notices the chemicals in the tubes all originate from Venom, the steroid cocktail that gave Bane his strength. He also finds a Sanctuary robot mask and demands to know if Claire went there to recover. Before Batman answers, Gotham Girl bursts through a wall of the chamber, holding a giant vial of Venom-derivative, asking if it’s time to team up with the heroes. Batman begs her to stop using her powers so she won’t die, and she says the “Super Venom” keeps her going, knocking Flash over with super speed. She reveals that someone gave her resources to create partners in her heroic quest in payment for destroying the Flash Museum. A number of Gotham and Gotham Girl copies attack Flash and Batman, and Claire proclaims she’d rather burn bright and explode rather than fade away. She plans to attack Central City PD next, and Batman tries to convince her that Hank wouldn’t have wanted what she is doing. She rejects his plea, flying off with a demented grin on her face, saying “Up, up, and away.”

Analysis: The second installment of this year’s Batman/Flash crossover, “The Price of Innocence,” doesn’t present itself with as much coherence as the first issue. Williamson does some excellent callbacks to Tom King’s set up for this story – Gotham Girl calling “Up, up, and away” ties directly to the conversation Batman and Gotham Girl had in Batman #24, and her speeches to her “brother” nicely mimic the conversations she had after his death in Batman #6. The internal monologues of Bruce and Barry nicely complement similar monologues in The Button, and the humor of the interactions balanced the dark context of Heroes in Crisis and Gotham Girl’s descent into madness slightly.

For all these strengths, the writing contains some fairly serious weaknesses as well. Chief among these is the radical departure from Claire’s characterization up to this point. King presented Claire Clover as someone who wanted to be a hero, a pure hero, in imitation and adoration of her brother Hank. Shawna and Julie Benson, in Batgirl and the Birds of Prey, had Claire explicitly say she didn’t want her desire to become a hero to warp into destroying the corrupt, as her brother did. While the Bensons’ run on Birds of Prey did tend to present the most positive aspect of characters (sometimes in a frustrating or shallow way, despite the depth of their knowledge and love of the lore of the DCU), the explicit contradiction between King and the Bensons’ version of Gotham Girl and Williamson’s jangles dissonantly. Though it’s clear that Williamson wants to highlight the tragedy of Claire’s current state by showing how warped her view of heroism is – endangering innocent civilians – no transition is shown. The implications via the bulky, red-eyed silhouette and Venom that Bane’s machinations have created this circumstance may partially explain her current state of mind, especially given her appearance in Batman #50’s tableau of Bane’s pawns, but so far, the jump seems too far to plausibly bridge. Additionally, Batman’s account of his relationship with Claire doesn’t match what we’ve read ourselves – it was Claire, not Batman, who said that her powers would kill her (Batman #5), and Batman doesn’t discourage Claire from being a hero as Flash accuses, but instead, in Batman #24, opens doors for her to continue saving others without killing herself.

In addition to these inconsistencies with the preceding issues, Williamson also drops bombshells like Iris’s fury at Batman and Flash not knowing that Batman’s marriage never happened too quickly for the weight these revelations should have. The idea that a Venom-derived drug could provide a stopgap to Claire’s powers destroying her is a neat connection to Bane, but doesn’t match the way her powers worked in the past.

The pencils by Rafa Sandoval prove very nice, though not as dramatic and unique as Guillem March’s last issue. Tomeu Morey’s colors continue to provide a dark, moody, but still clear and superheroic world, though they don’t seem to work quite as well with Sandoval’s linework as with March’s. There’s something that feels more synthetic, more “Hollywood,” appealing in a calculated and constructed sense, than the darker, more atmospheric colors of the first issue, even though they’re the same color artist. Sandoval’s lines are more realistic and rounded than March’s stylization, which probably adds to the difference.

All in all, though the mystery presented between Gotham Girl, Bane, and Batman picks up a long dropped plot thread in King’s run, the execution by Williamson presents a few too many discordant notes to truly mesh with the ongoing story of Batman, Bane, and Catwoman that Tom King has been telling for the past two and half years.

Final Thoughts: The next chapter of “The Price” falls short of the atmosphere, emotions and coherence of the first issue, though it does explore the mystery of Gotham Girl’s origin.