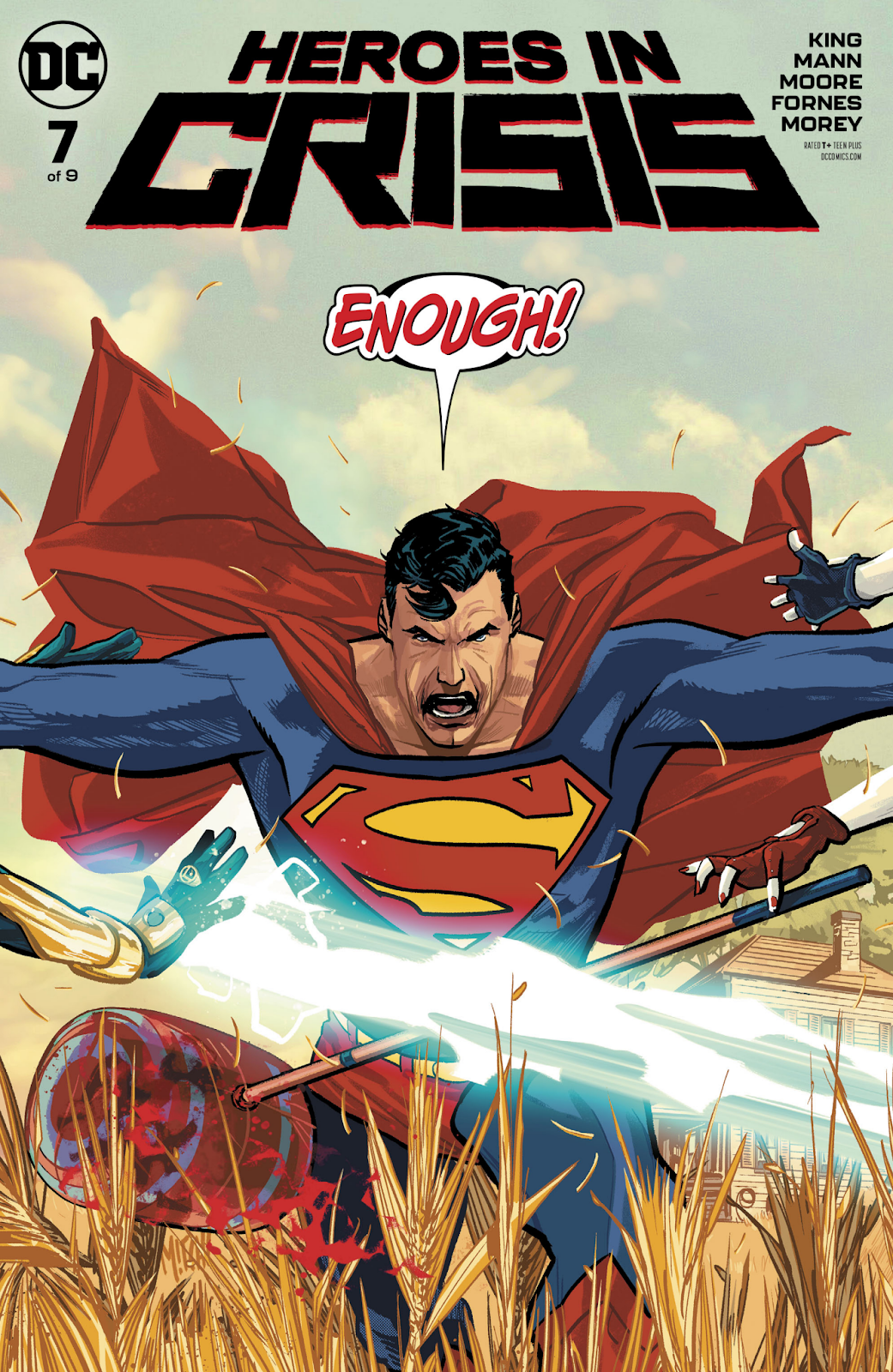 Synopsis (spoilers ahead): Wally West, the Flash, stands in a field of flowers, reminisces about the poem his wife Linda read at their wedding.

Wally starts his first therapy session at Sanctuary, expressing hope that he’ll finish it quickly, as he is the world’s fastest man.

Barry Allen races to the Batcave to find Batman, who tells him to find Booster.

Batgirl knocks out Beetle, causing Booster’s shield to malfunction as it is connected to Ted’s consciousness. Harley gets the upper hand in the fight as Batgirl continues to warn her not to kill.

End of Week One of Wally’s therapy: he recalls his family, and then says they’re all gone.

Barry Allen races all over the world looking for the fugitives while Batman sits at his computer and lets his tech do the work.

Booster admits he is guilty of failure and tells Harley to kill him. Harley motions to fatally stab him, but stabs the ground instead, unable to follow through with it. She collapses with frustration beside him. They bond over their shared failure at being superheroes.

Week Two of Wally’s therapy ends, and he meditates on becoming the Flash after Barry died, but was left without a purpose when he came back – and lost his family and existence because of Barry’s Flashpoint.

The story jumps to Wally in the field of flowers and his blue lightning appears to trigger Poison Ivy regrowing from a giant flower.

Batgirl, Beetle, Booster and Harley all sit and talk about where they are in the investigation. They conclude that they need to connect Skeets to a powerful network to find out what’s going on and they also decide not to tell anyone about it.

Batman’s tech finally locates Booster, as the gang’s plan to find Wally triggers all of his alarms.

Wally apologizes to Poison Ivy because she will have to witness his death. At that moment, a second Wally appears directly opposite him, covered in the lightning of the Speed Force.

Week Three of Wally’s therapy ends with him fading into silence, covering his face, then saying he can’t wait for week four.

Analysis: Tom King’s “event” (in quotation marks because even though it affects other titles, it’s much more of a quiet but brutal meditation on love, loss, and heroism than any kind of massive superhero brawl) continues into its final third with issue #7. Unlike a few of the previous issues, the rhythm of the scenes blends well between the three main plotlines – Wally, Batman and Barry, and the quartet of misfits. King blends poignant moments of loss and self-doubt into sharp moments of humor and friendship. The relationships between all eight of the characters featured in the book are full of little details, from Harley’s attempts to provide superhero banter with warped nursery rhymes, to Batman’s wry observations about Barry’s peripatetic searches. While Barbara’s voice continues to be a bit off from previous depictions (as I wrote about in my essay here), King’s version of Babs is still smart and appealing. There’s also an intriguing theme of growth, paralleled by images of plants in Wally’s field of flowers and Ivy’s re-blooming in the giant blossom – a truly creepy and interesting notion. Despite the grimness of the overall story, Booster’s speech near the end of the book gives one hope that the central theme of “Rebirth” won’t be lost with this miniseries.

Clay Mann, the main series artist, provides the framework for the book with the opening and closing sequences, and the four therapy sessions with Wally throughout. The title page, as always, is a stunning work of art, with Wally standing in the field of flowers spelling out “Heroes in Crisis.” Jorge Fornes, fresh off of two issues of Batman (#66 and 67), does fine, if somewhat lower in detail than those two issues, work on his three pages depicting Barry Allen and Batman’s banter as they search for the fugitive Booster. King’s use of the nine-panel grid provides a lot of the humor in the relationship between this pair, last seen at rather extreme odds in the frustrating crossover “The Price”. Travis Moore shoulders the bulk of the rest of the work, providing a cleaner line than Mann, but still matches his style closely, making the transitions between Mann and Moore’s versions of the characters fairly smooth. Colors by Tomeu Morey are very good, though still a bit more rendered than I prefer. All in all, though the juggling of art burdens throughout this series has been a bit of a letdown, as generally work by a single artist helps provide a unified sense of character and world, King writes to the strength of each artist and weaves everything together very well.

The main cover by Mitch Gerads of Superman shouting “Enough” is a very clean and bright image, if quite an odd choice, since Superman is not in this issue at all. The variant by Ryan Sook drawing the death of Kilowog, traumatic to Hal Jordan, provides a dark and gritty contrast to Gerads’ cover. The references to the past tragedy in these variant covers by Sook are interesting, but it’d be nice if they connected more with what the characters are actually dealing with. For example, in this issue, something depicting Wally’s loss because of Flashpoint would be nice, if hard to convey.

Final Thoughts: King and his art team start down the home stretch of Heroes in Crisis on an upbeat and weirdly inventive note, though dark lightning flickers on the horizon.