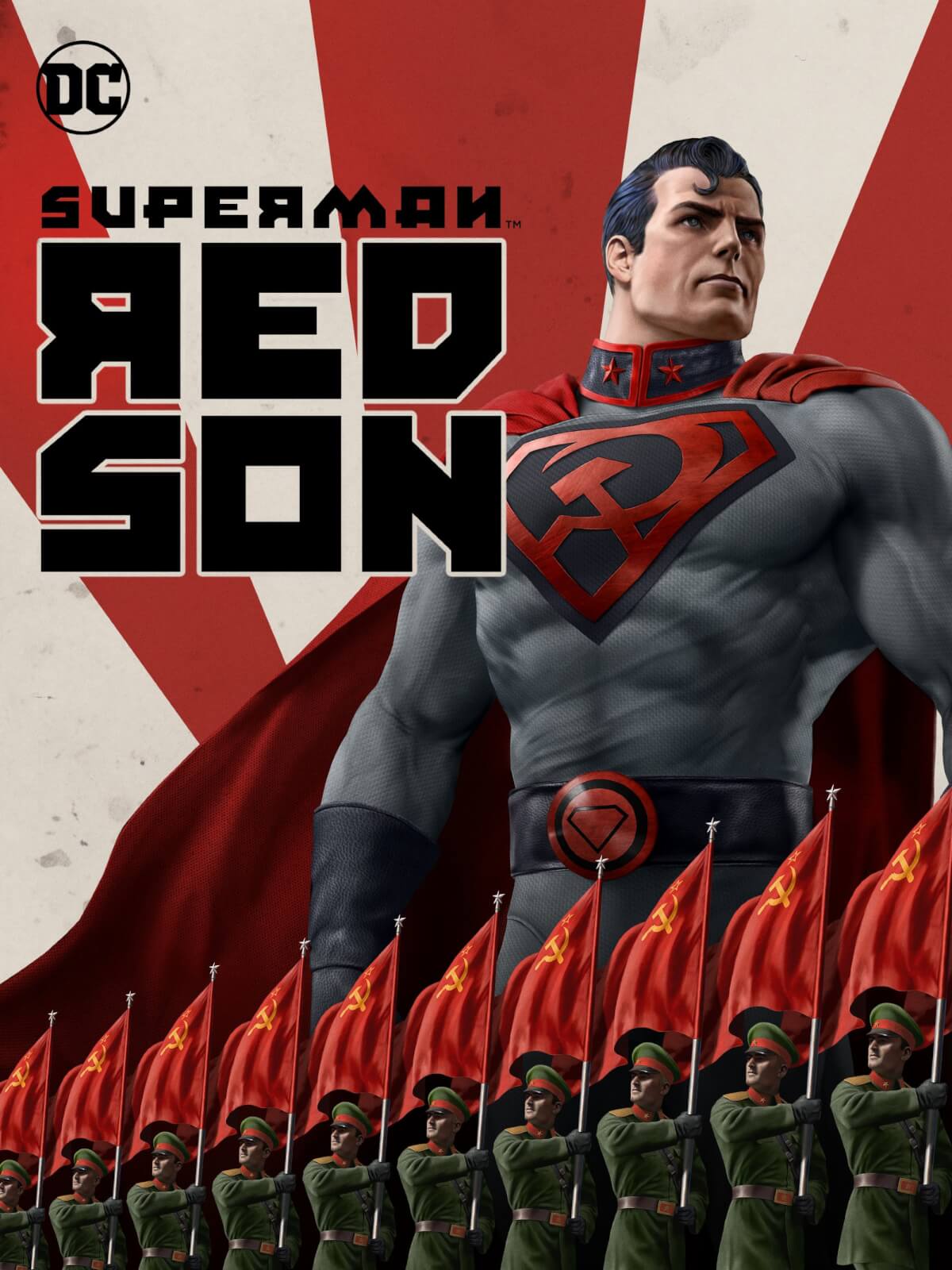 Overview: A film adaption of the Mark Millar story originally released as three prestige issues as part of the DC Elseworlds line.

Analysis: Superman: Red Son is a fantastic film that effectively presents and explores Cold War-era relationships and tensions between the United States and the Soviet Union.  The film re-imagines the origin of the titular character, voiced to perfection by Jason Isaacs, as growing up in the communist Soviet Union instead of Kansas.  For those unfamiliar with “Elseworlds” stories or the alternate universes that are so popular in comics, this story is an alternative depiction of the characters and therefore there will be deviations from the standard versions of the characters that general audiences are familiar with.  There are also deviations from the comic it’s adapting, however, I think the changes work for the purposes of the movie.

The film attempts to portray what Superman would come to represent to the Soviets and how it would impact relations and the arms race with the United States while at the same time presenting a very nuanced and balanced take of Soviet communism vs. American democracy.  Both sides are presented as flawed and falling well short of their professed ideals.  Almost every character is a shade of grey.  While this story includes actual historical figures such as Stalin and Kennedy, it’s best thought of as an alternative timeline instead of an attempt to drop fictional characters into an accurate retelling of history.  The pacing is absolutely brilliant, I was astounded they were able to fit as much as they did into an hour and twenty minutes.  The story takes place over the course of many years and yet it never feels rushed or flimsy.  Every moment is meaningful and serves a purpose in developing the characters.  We see Superman and Lex evolve over time and deal with different changes in circumstances but ultimately still keep their focus on their respective goals.  By the end of the movie, they both realize their goals aren’t so different even if they arrived at the same place from opposing ends.

If there are any true “heroes” in this movie it would be the women: Lois and Diana.  Diana’s ethics and vision for what the world could be, represent the utopia Lex and Superman are searching for.  While Diana offers a chance for humanity to reach their potential through peace, a pure vision, both Lex and Superman are too obsessed and distracted with petty fighting and the illusion of power to truly attain the utopias they seek.  At this point, both want to achieve their goal but only on their terms.  They have yet to understand how to shove their egos aside.  Diana offers Superman one last chance towards the end of the movie to see the error of his ways but he declines.  Diana deciding at that moment that Paradise Island will remain hidden is also a metaphor for her belief that mankind will never attain their “paradise”.  Lois is portrayed as a highly successful and ambitions reporter, as she always is, and she’s certainly not opposed to scolding her husband (Lex) when she feels he is out of line or just speaking her mind in general.  While this is true for the first half of the movie, Lois is kind of benched for the second half and barely has any meaningful screen time.  It’s hard to get everyone adequate screen time in a movie that is only eighty minutes long so it is understandable there would be sacrifices made somewhere.  Lois does have one of the more moving moments in the movie at the end and there will be more on that later.

If you are reading this review, you’re probably wondering why a Batman website is covering a Superman movie.  It’s because Batman is also in this movie!  His origins are completely different from the traditional depiction of the character from a social and class standpoint, however, the motivation for his rage remains the same.  We first meet him as a child in a gulag camp where his parents have died from what appears to be some combination of exhaustion and malnutrition.  His rage is directed at the Soviet Superman who he blames for the existence of the gulags and for the death of his parents.  The next time we see him is as an adult who has adopted the Batman persona and he appears to have an army of insurgents working for him.  This version of Batman is an anarchist and a terrorist who has no qualms about killing people in order to tear down Superman’s regime.  It eventually culminates in an epic Batman vs. Superman fight with tragic consequences for both characters.

The animation in this movie was very close to the standard DC house style for these animated projects.  I’d probably say it’s closest to the Gotham by Gaslight visuals albeit in very different eras.  While some animated superhero films have a tendency to feature very crude, “slug it out” fights (especially when Superman is involved), the fight sequences in this movie are all very well thought out and choreographed.  My main critique is that a lot of the backgrounds tend to be static or eerily empty.  A good example is the ballroom scene where Superman and Diana are dancing together and the people watching them as they move through the room are all frozen in place with glassy-eyed expressions and vacant smiles.

The end of the movie left me with some mixed feelings about the final act.  On the one hand, there are some great moments like Lois offering Superman the caged city as a peace offering.  Superman finally comes to terms with his blind spots by talking to Lois.  It’s a revelation that is entirely earned because the entire movie has built up to this moment.  The Brainiac twist was a little reminiscent of the end of Watchmen but it expedited Luthor and Superman finding common ground.  Superman making the sacrifice for the greater good and the link back to one of the early scenes of the movie was brilliantly done.  On the other hand, I thought the end did lose a bit of the political nuance it exhibited throughout the rest of the movie and ventured a little too far into American exceptionalism (I mean this in the more modern use of the term).  In any case, the movie does leave you with a good feeling (as I believe any Superman movie should!) and a final, classic Superman moment at Luthor’s resignation speech.

Final Thoughts: I highly recommend comic fans and casual superhero fans give Superman: Red Son a watch.  It tells an outstanding superhero story while also examining political and historical themes.  This movie is one of those films you can watch a second time because you will pick up on more stuff you missed on the first watch.  It’s one that will make you think and keep you entertained.

Editor’s Note: Superman: Red Son is now available on Digital HD, Blu-ray and 4K. You can order your copy, and help support TBU in the process, by heading over to Amazon.