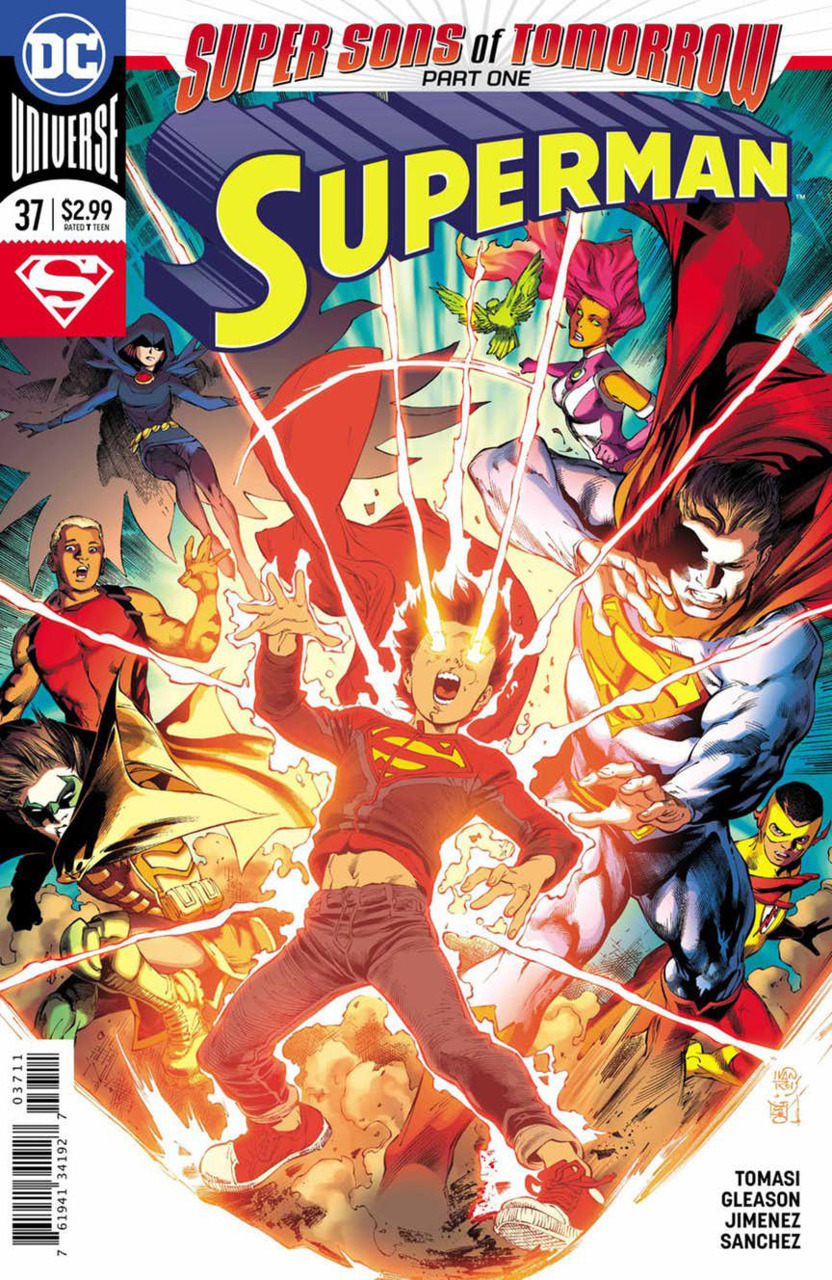 Overview: Just as things are settling down following the attack from Mr. Oz, Superman is confronted by a Batman from the future. This Batman, a murderous Tim Drake, has returned to the present to kill Superboy to save his own timeline.

Editor’s Note: This is the first part of the Super Sons of Tomorrow crossover that takes place in many TBU titles. The story continues in this week’s issue of Super Sons #11.

Synopsis (spoilers ahead): Opening in Wayne Manor, Bruce is in his study when Bat-Tim comes crashing through the window. As made clear by his first comments to Bruce, Tim is back and much sooner than he ever expected. It’s appear to that he has another mission which Bruce states will inevitably lead to someone’s death. The two begin a bloody brawl throughout Wayne Manor. Trapped by a fallen chandelier by Bruce, Tim draws his gun and shoots Bruce. Tim then drags him through the secret door to the Batcave and reveals Bruce’s weapons against the Justice League and how he’ll use Bruce’s paranoia to his advantage.

In the Arctic, Superman begins the job of repairing the statues that Mr. Oz (AKA Jor El) destroyed in the Fortress of Solitude. With the help of Kelex, the job is under way until Kelex detects an intruder. The intruder, Bat-Tim, opens fire on Kelex but is quickly grabbed by Superman and thrown across the Fortress. Bat-Tim is surprised his bullets have little effect on Superman despite their design to weaken him at the very least. Superman figures out that this Batman is Tim and the one that time displaced that he had heard about. Tim tells Clark that he is not here to kill him but stop him from potentially getting in the way of his mission. After a release of smoke, Bat-Tim is able to gain access to a Kryptonian battle suit thanks to being taught the Krytonian language by the future Connor Kent.

The fight is taken out onto the Arctic snows as Superman rips Tim from the battle suit. He asks him if he’s back to change the past so he can alter the future again to which Tim only responds that it is so much bigger than that. With a press of a button on his gauntlet, Superman is enveloped in a tube powered by red sun radiation. Tim apologizes to Superman but tells him that he must kill Superboy in order to save the future.

Analysis: Since I don’t read solicitations generally, I was not expecting, as Bat-Tim points out, to see Future Tim back so quickly after Tim’s return in Detective Comics. Although this return could have been more impactful with a little break between his appearance in Detective Comics and now, I still found this issue to be a great set up for another time-displaced Tim Drake story on the hunt for another “threat” to the future.

The issue is an overall action set piece broken up into two parts. The confrontation with Bruce is a brutal and very personal one while the Superman fight feels purely strategic. The first attack on Bruce gives us a further look into how well trained this Tim since he is able to take down Bruce at his peak. His lack of restraint gives him the edge, of course, but he is able to go toe to toe with his former mentor. Since we had already gotten this type of scene/dialogue at the end of the Lonely Place of Living arc, I did not think it had to take up half the issue. That being said, it was great to see him reveal the “tower of babel” weapons against the Justice League.

The second half of the issue was a short, but good insight into the relationships that Future Tim cultivated in his own timeline between Superman and Connor Kent as noted by his learning of the Kryptonian language and expertise at operating Kryptonian technology.

Jimenez’s artwork was a great addition to such an action packed issue given how well he handles fast paced scenes. You really get a feel for how a fight is going when Jimenez draws it. You can feel the brutality of the table smashing and knife throwing of Bruce and Tim’s fight and the bombastic, glacier-smashing battle between Superman and Tim inside the Kryptonian battle armor.

Final Thoughts: As a single issue, the story did not have much character development nor did it really focus on Superman. Half the issue, as noted earlier, took place in Wayne Manor between Bruce and Tim. As this was a Superman issue, it may have been better for Superman’s confrontation with Future Tim to last longer. This could have even revealed more about Future Tim’s relationship with Superboy/Superman in the future. However, as a set up for this Super Sons arc, I am definitely looking forward to seeing Jon and Damian face off against Bat-Tim.