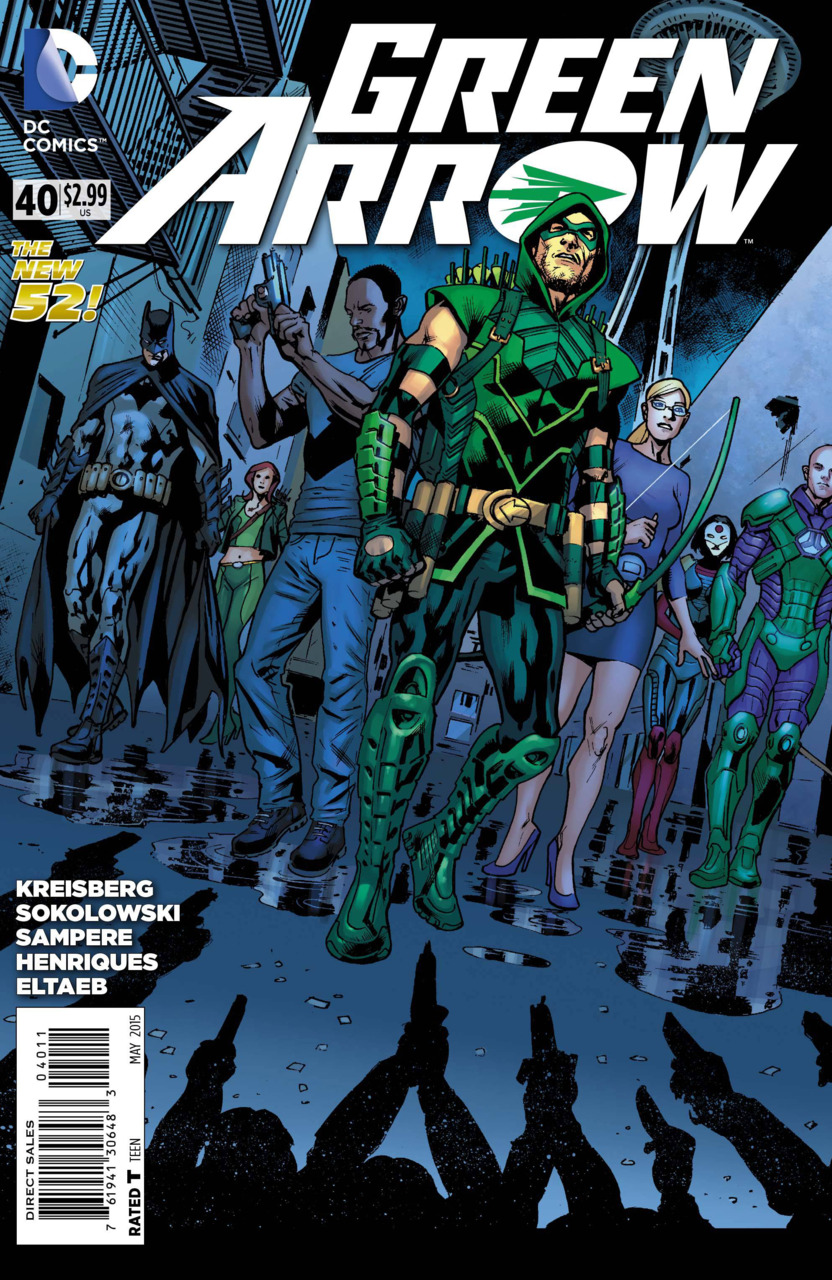 Andrew Kreisberg and Ben Sokolowski wrap up their brief run on Green Arrow this month with issue #40. Arrow has amassed an army including not the likes of fan favorites from the the hit TV show in Felicity and Diggle but also includes Arsenal, Batman, Lex Luthor, Cupid, Emiko Queen and Katana as they execute their final assault against John King.

Let’s start with the good. The art and layouts make great use of using so many characters in such little space even if it feels arbitrary that they are there at all. And even if Felicity MUST be in the comic book as well as Diggle I am glad they are actually trying to make them look like the Felicity and Diggle we know and love. There is a panel in that made me almost think they had that Emily Bett Richards pose to be drawn. Another great thing about these writer’s use of the characters is even if it seems packed with those unnecessary to the plot you can tell they love all the characters they used and have a good grasp on what they would do if Arrow did indeed ask them for a favor. The story moves forward at the right pace and comes to a satisfying conclusion as of course our hero wins. The dialogue is exactly what you would come to expect from these writers from the hit show.

Now on to the bad. The writers of this arc explicitly said that this wasn’t them trying to take the CW show and implant it into the comics. And that would be a good thing if that wasn’t just this side of an alternate beginning to how the show started with both John Diggle and Felicity Smoke finding their place in the “Arrow-Cave”. On top of that we have yet another villain taking over a sector of a city, in this case Seattle, and running amok even going so far to have police in on the take. It totally makes it feel like this may have been an idea they had for the show and decided to substitute other characters for those they would normally use in the show and then to get more readers and possibly satisfy their own creative dreams shoehorn in the likes of Batman, Lex Luthor, and Katana. I’m honestly not sure even Lex Luthor knows why he was there. He must have lost a bet or something. And Batman serves only a functionary role in this by intimidating someone to actually press charges against the villain. As always Batman comes off as a total bad-ass but I can’t help but wonder if he didn’t give Ollie the Bat-look and asked “You actually need me to do that?”

It does leave this reviewer to wonder that while it is great to have help and friends in the DC Universe to call upon when things get hairy is this version of Green Arrow even able to take on a threat this low level on his own? I can only imagine that off panel Ollie and Bruce had a long talk about what he did wrong. Here’s hoping he did at least. Because this Arrow is truly GREEN.