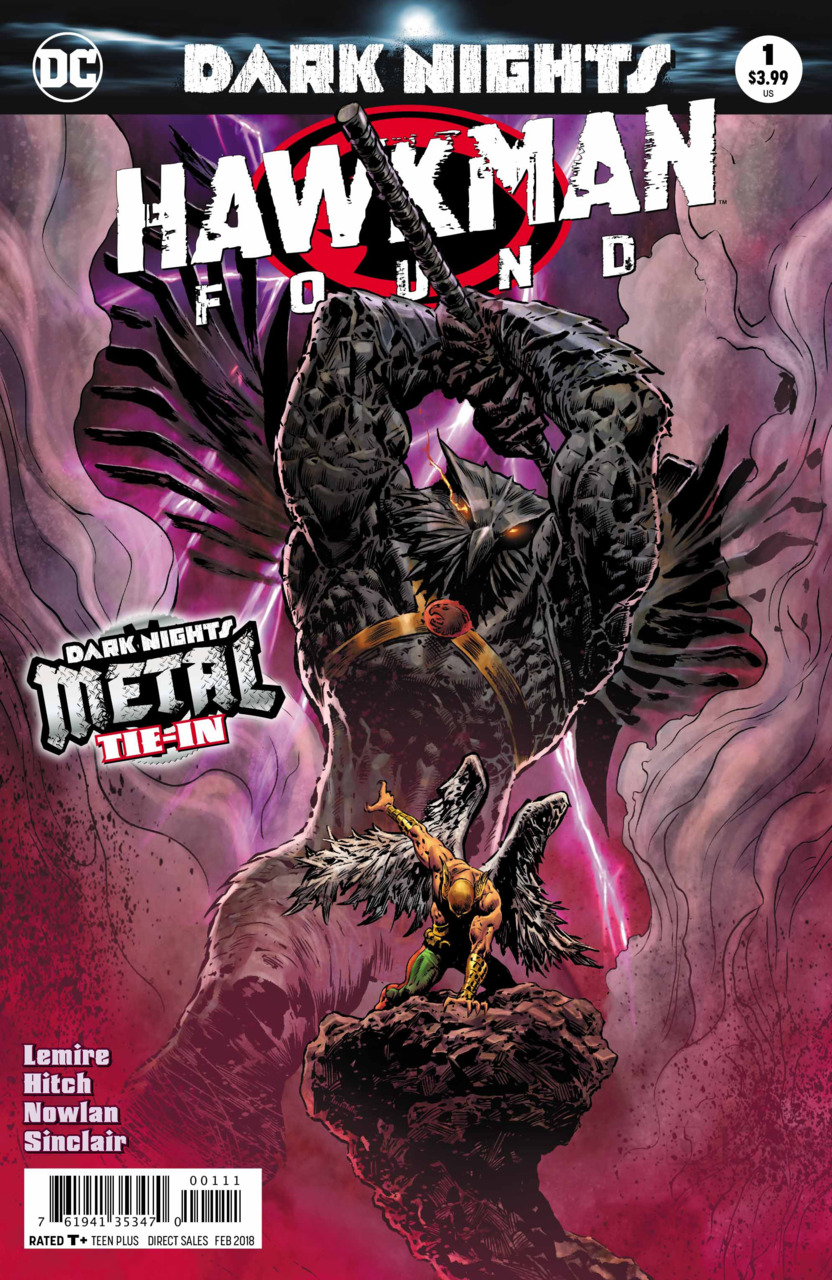 Overview: You are waiting for a train…

Synopsis (spoilers ahead): We open with Hawkman soaring through the skies. He talks of a dream he has every night. No, a nightmare. He doesn’t remember falling asleep, but that’s what it must be, because it happens over and over again. It’s by this nightmare that he keeps track of time, for there is no sun nor moon to keep track of the days. So each time his wings shed and he plummets back to the earth, he crawls back into his cave and carves another hawk into the stone.

The cave is filled with those carvings now. He hears the screeching of Manhawks outside and rushes out to protect the people outside the cave with his primitive hammer and spear. The other people just watch him, and he wonders if he knows them or if they are ghosts.

He scales up a cliff-side to reach the alien ship these Manhawks came from. He leaps across and makes it inside. He looks around and sees various weapons and artifacts. It feels familiar to him. Grabbing a mace, it all comes back to him. He remembers who he was.

He is then attacked by a nightmare version of himself. It threatens to take all of his souls. He starts to remember why he is here… he was searching for the Challengers after their disappearance in Challenger’s Mountain into the Dark Multiverse. He didn’t find them, but found the Forge of Worlds unmanned. He knew he had to fill the role, that all life depended on it. But these Nightmares trapped him inside this prison, and he can’t seem to find his way out. The Nightmare threatens Kendra, and Carter looses it. He kills he Nightmare, and takes his metal wings.

He takes to the skies. He talks of a dream he has every night. No, a nightmare. He doesn’t remember falling asleep, but that’s what it must be, because it happens over and over again. It’s by this nightmare that he keeps track of time, for there is no sun nor moon to keep track of the days. So each time his wings shed and he plummets back to the earth, he crawls back into his cave and carves another hawk into the stone.

Analysis: Jeff Lemire gets real creative here. He is limited in what he can do by the confines of the story, but works within it to tell an interesting story. The whole thing is an inception style dream within a dream, but runs in a constant loop instead. It being a dream, I’m sure there’s a lot of symbolism within that we will see played out in the future, but that’s mostly me projecting. I’m certain that the other people that Carter comes across are previous lives he has lived, thus his Nightmare telling him he will “take his souls”. His third-person narrative works really well with this story. It really gets into the head of Carter, allowing you to connect with a character who is often not used in a solo outing. In fact, this style of storytelling worked so well that when it came out for a moment during the fight with the Nightmare, that moment took me out of the comic. I think it would have been better had Lemire committed to the style all the way through, and just had Carter tell us what was being said instead. It’s like the two lines in Les Miserables where they speak instead of sing… you’ve committed this far, why not go all the way?

Bryan Hitch is not my favorite artist. Not that his art itself is bad, it just lacks in any style or character to me. It feels unoriginal. His storytelling is well done, as it’s easy to get what’s happening without reading, which speaks to the guy’s experience. There was an inconsistency that bothered me throughout the comic; a line in Lemire’s script specifically says how he can’t keep track of time because there is no sun or moon. Yet it’s clear that there is sunlight, and in multiple panels there is clearly a sun; you can see the sun in the panel. It’s nothing major, but details like that matter. Hitch needs to work more on his attention to that detail.

Kevin Nowlan brings an interesting dynamic to Hitch’s work. Hitch prides himself with his photo-realistic art, but Nowlan contrasts this style with very strong, smooth ink-lines. This gives the book a more animated look, which is conflicting, but doesn’t necessarily clash. It works okay, I’d just like to see another pairing. Alex Sinclair and Jeremiah Skipper color here. I’m curious to see who did what. I have been critical of Skipper’s work in the past, but I really couldn’t tell where the dividing of the work took place. The differing scenes looked great, and the flashbacks stood out well. The final page looked as though it was the most fun. But again, these guys would have contributed to, if not fully responsible for that freaking sun in several backgrounds. Come on, guys! Clayton Cowles letters this, and does a fine job. He has nice flow with his layout, and does well with his boxes and font.

Final Thoughts: Jeff Lemire can always find a way to make you relate to a character, so giving him a character who’s not the most popular isn’t a bad call. It let’s us know what’s been going on, but doesn’t add much to the overall story. Plus, the style of writing has more personality than the art does.

PS – DC, Jeff Lemire would kill at a Superman comic… why don’t you let him draw it too? You guys can thank me later.