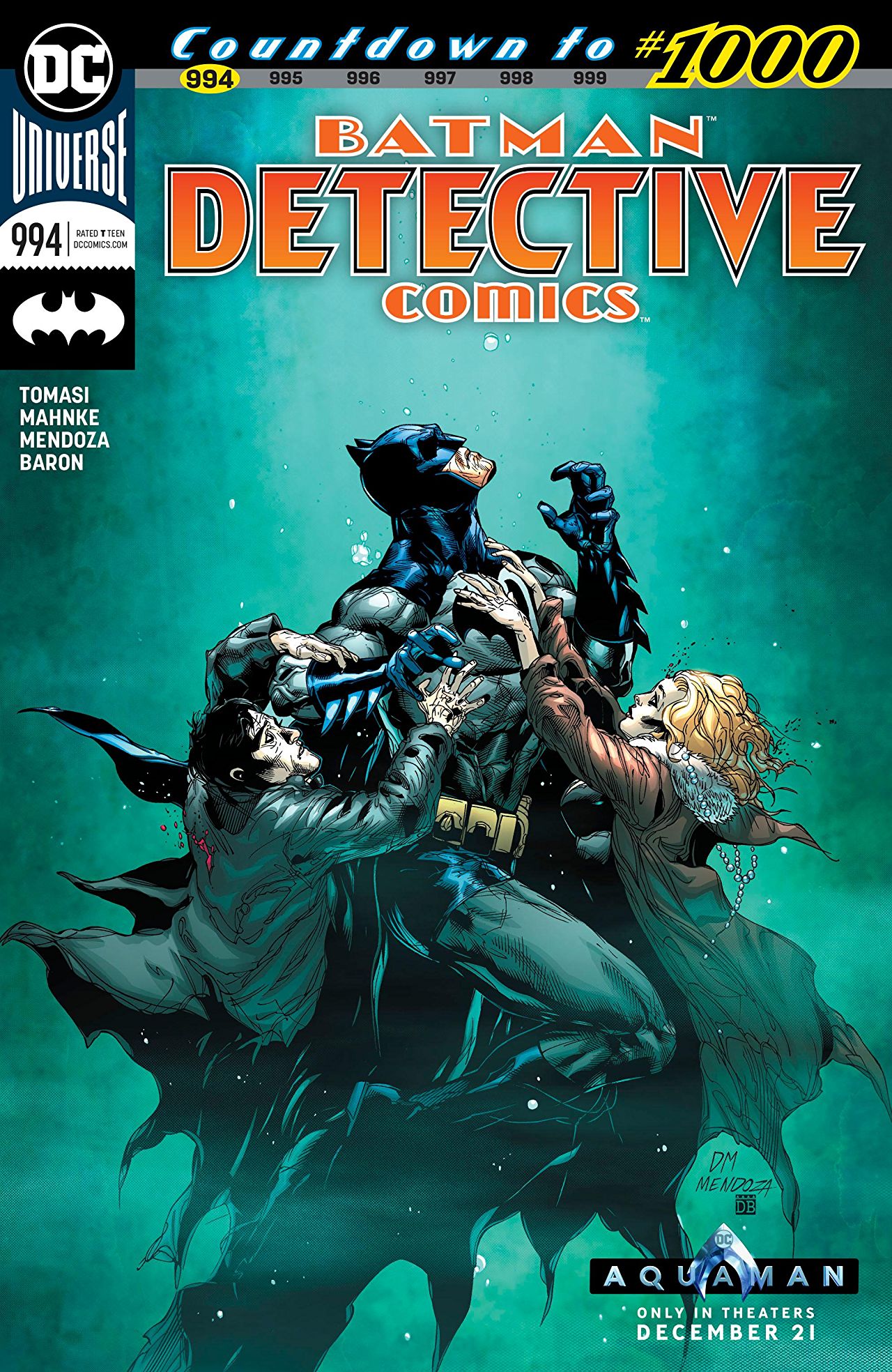 Overview: On the anniversary of his parents’ murders, Bruce is called to the scene of a double murder that resembles his parents’ in every conceivable way.

Synopsis (spoilers ahead): Batman meets Commissioner Gordon at the Gotham City Aquarium. A young couple is found dead inside one of the tanks, and they resemble the late Martha and Thomas Wayne. Gordon recounts the Waynes were his first double murder. Batman says they were his as well.

Instead of waiting for the GCPD diver to fish the bodies out, Batman uses an explosive to empty out the tank. These bodies were staged to look like the Waynes. Every little detail has been accounted for. Batman says they even have exact replicas of their wedding rings. Batman notes whoever had these innocent people killed took extreme measures to recreate Wayne’s murders. Extensive plastic surgery was used to have the deceased look like the real Waynes. Gordon even notes their bullet wounds are in the exact same place as the Waynes.

While examining the body of the deceased male, Batman recognizes there is something abnormal with their cause of death. After examining the male’s eyes, he realizes they did not drown. Batman turns the body over and tries to expel the water in his chest. With only a little having exited the body, Batman realizes something is blocking his airway. Batman looks down this man’s throat and retrieves a pearl.

This pearl came from the torn necklace of Martha Wayne. Batman tells Gordon there probably is a pearl in the woman’s throat, and these pearls were administered post-mortem. This couple was murdered elsewhere. Gordon asks why these people were dressed like the Waynes, and Batman states it is the anniversary of their death.

At Park Row Community Clinic, the always diligent Leslie Thompkins, who stayed late for work, heads home to grab a bit of sleep before her shift that begins in a few hours. A monster stands in front of her holding a Bat-signal. Leslie runs inside her clinic and radios Batman to come and help her.

Batman immediately tells Gordon to meet him at Park Row Clinic. As Batman speeds toward her in his Batmobile, Leslie updates Batman that this thing is impenetrable to bullets and it is seemingly following her. Batman tells her to jump from the roof of her building to the one across the street. She hesitates and decides to hide instead, not knowing Batman was going to catch her mid-air.

Leslie realizes this thing is after Batman and tells it to leave Gotham’s hero alone. She stabs this thing in the back, only to make it angrier. Holding Leslie by the throat, this thing emits a gas and forces Leslie to breathe it in. Batman comes in and frees her from its grasp. Batman tries to fight it hand-to-hand but realizes that is a useless endeavor. He throws two explosives at this thing, and in response, it throws Leslie over the roof. Batman catches her before she hits the ground and asks if she is okay. While holding back a hysterical laugh and a terrifying grin, she says she does not think so.

Analysis: Patience is a virtue. And, our patience was rewarded. After suffering through six issues of hard-to-read gibberish, we have come across a legitimate story — a story worthy to be in the illustrious Detective Comics. Peter Tomasi started his run with an amazing first issue.

First, I appreciate his inclusion of Leslie Thompkins. She is one of those Bat-Family characters who has a lot of rich history but is overshadowed by the craziness of modern story-plots. How does a doctor at a free clinic compare with a crazy Joker attack, Bane onslaught, or some other crisis? But, her personal connection to Bruce Wayne gives their relationship a certain dynamic few of his other relationships provide. And, with a copycat killer on the loose, Leslie and Alfred are two of the only people who can help Bruce emotionally while he solves the murders of the young couple.

The art is awesome. Doug Mahnke and crew did a great job making a beautiful comic. The pencils and colors were terrific. Only “con” is Batman’s suit is almost always blue. I know this effect is because of the lighting and how it would reflect off his suit, but this tactic is repeated often. I like my Batman dressed in black. Otherwise, it is perfect.

Final Thoughts: I can actually look forward to and enjoy Detective Comics again.