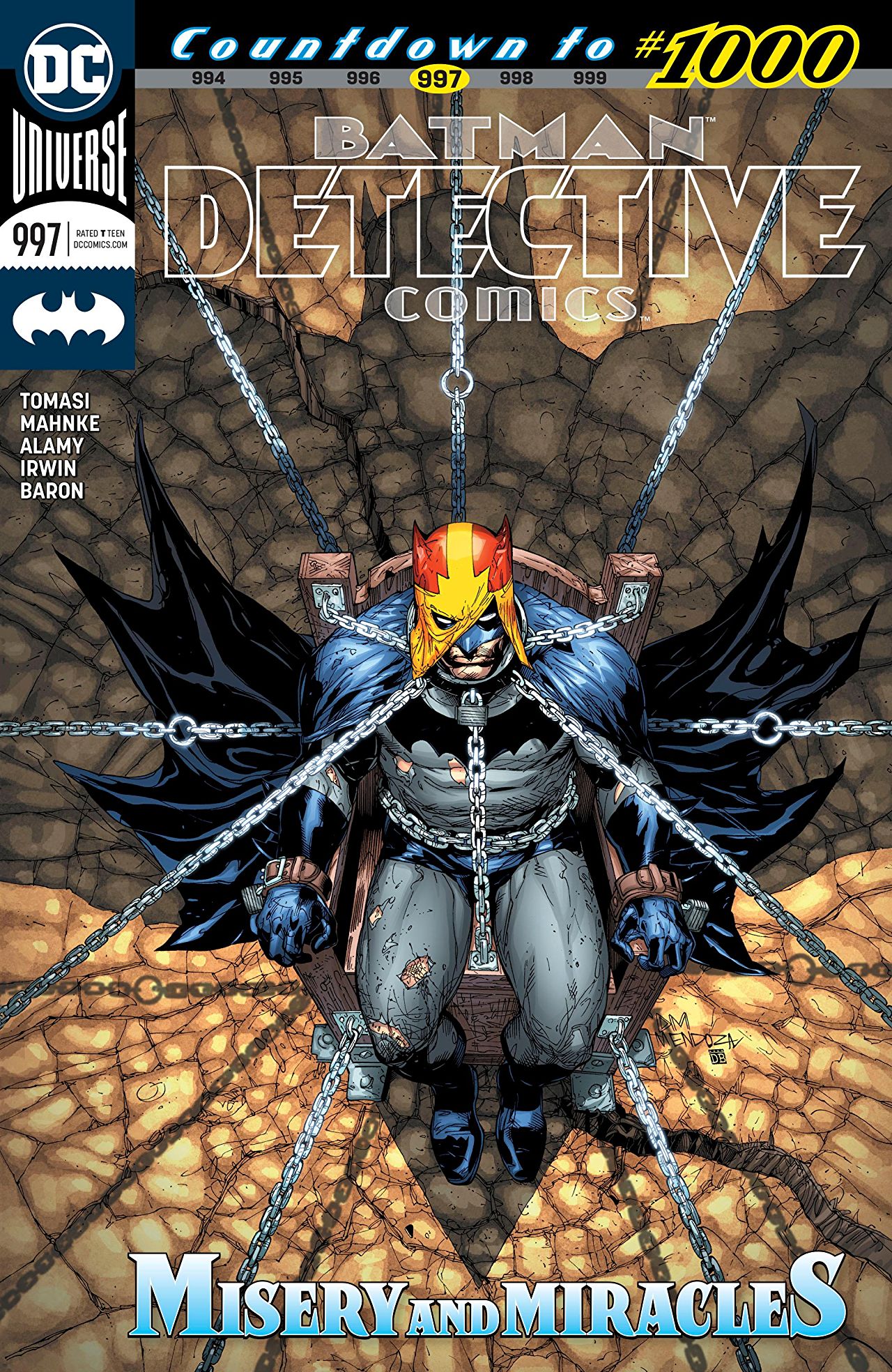 Overview: Batman has to escape a tank full of sharks and piranhas.

Synopsis (spoilers ahead): Batman screams for Thaddeus to wake up. Realizing they were now trapped in a fish tank with the water slowly rising, Thaddeus asks Batman how they got into this mess. Batman tells him they were gassed after the ground had flipped over. Thaddeus asks Batman if he knows why this monster attacked him and made him wear his old costume. Batman tells him he was his teacher. This monster is going after all the important people in Bruce’s life. Batman asks Thaddeus if he knows of a way to escape, and he responds that he does not.

As the water level in the tank rises above their heads, Batman and Thaddeus hold their breath as they think of a way to escape. To make matters worse, they are surrounded by sharks. With Thaddeus’ open wounds exposed, the sharks were ready to tear them apart.

Batman realizes Thaddeus’ living room was staged for this. The windows are sealed with some metal. He notes that the leather used to tie them up was saturated leather. Saturated leather gets tighter as he struggles to move. He cannot separate his shoulders and work his way out of their bonds. Whoever sprung the trap was good.

Thaddeus knows his blood is attracting sharks. As one shark approaches him, a projectile from Batman’s cowl is launched, hitting the shark and saving Thaddeus. This distraction gives Thaddeus enough time to reposition himself and uses the strap against the shark. Meanwhile, Batman uses his gauntlet to slice the belly of a passing shark. Batman notes his old teacher is beginning to run out of air.

The metal window behind them opens, and a flood of piranhas’ enter the tank. Thankfully, they will go after the sharks first. But it will not be long before they will turn their attention on Batman and Thaddeus.

Batman moves to where a chunk of shark meat is floating by. As a piranhas bite into this meat, they also bite into Batman’s strap. These piranhas tore the leather straps enough for Thaddeus to remove them. With his hands now free, Batman frees Thaddeus just as his air runs out.

Now on land, the two are met by a “monster Batman.” This thing taunts Batman by asking if he was looking for his utility belt, which the monster has on. Batman attacks the monster and reclaims it.

In response, the monster spawns people who look like his parents and has them attack Bruce. Batman fights through these avatars and sends his grappling hook through this monster’s face. Batman drops this monster into the fish tank of piranhas that he and Thaddeus were just in. The monster’s last words to Batman were, “Remember, the cowl eats its own.”

Batman’s jet arrives and he asks Thaddeus if he needs a ride. Thaddeus tells him he wants to join Batman on this mission. It is the first time he has felt alive in a long time. Batman tells him this is a solo mission, just something he has to do on his own.

In his lab outside Gotham, Hugo Strange is messing with some experiment (while in a Batman costume). Batman blows up a wall and walks inside. Strange states that whoever did this will die just as Batman attacks him.

Analysis: This issue can be split in two, the first was pretty much a bottle episode and the second was a quick battle with the monster.

A bottle episode is an episode in a TV series where the entire episode is shot in one location. In such a constrained space, the characters are not able to do much. Thus, the plots are focused around issues where these characters have to talk it out. (You could have this setup in a movie, but that would be hard to do. The only movie I can think of is The Hateful Eight.)

The first part focuses on how Batman utilizes the OODA loop – Observe, Orient, Decide, and Act. To me, this was pretty cool because we never really see Batman’s thought process during an escape attempt. Usually, in comics or other media, Batman gets out of these traps because “he’s Batman.” Which is awesome that he can one-up the Justice League at times, but it is nice to see his thought process every now and then.

Thaddeus was enjoyable. I had no strong feelings either way about the character. According to the wiki’s, Thaddeus never had a connection to Batman. It is believed Zatara (Zatanna’s father) taught Bruce escape artistry. This is a change to Bruce’s past, which is slightly sad because I wanted an excuse to have Zatanna in a Batman story. If Zatara was off the table to use, then Thaddeus was a good choice. Thaddeus also taught the current Mister Miracle, Scott Free. It seems like Bruce had a good teacher.

This monster: Bruce needs to get a restraining order. This thing is stalking him everywhere. I am getting tired of the monster. What I mean is, we just keep seeing this thing attack Bruce and say he is going to kill him. Bruce neutralizes him and we do not see him again until later. I want to know why this thing is after Bruce. Who created it? What is its the main purpose? I hope the next issue begins to answer these questions.

I think Hugo Strange is the obvious choice for its creator. I mean, Night of the Monster Men was basically Strange making these monsters.

The art was great. I loved how Mahnke drew the scenes in the tank. The whole entire first half of the issue is set underwater. The art this entire run has been amazing.

Final Thoughts: It was a fun and enjoyable issue. There is nothing better than Batman being attacked by sharks and piranhas.