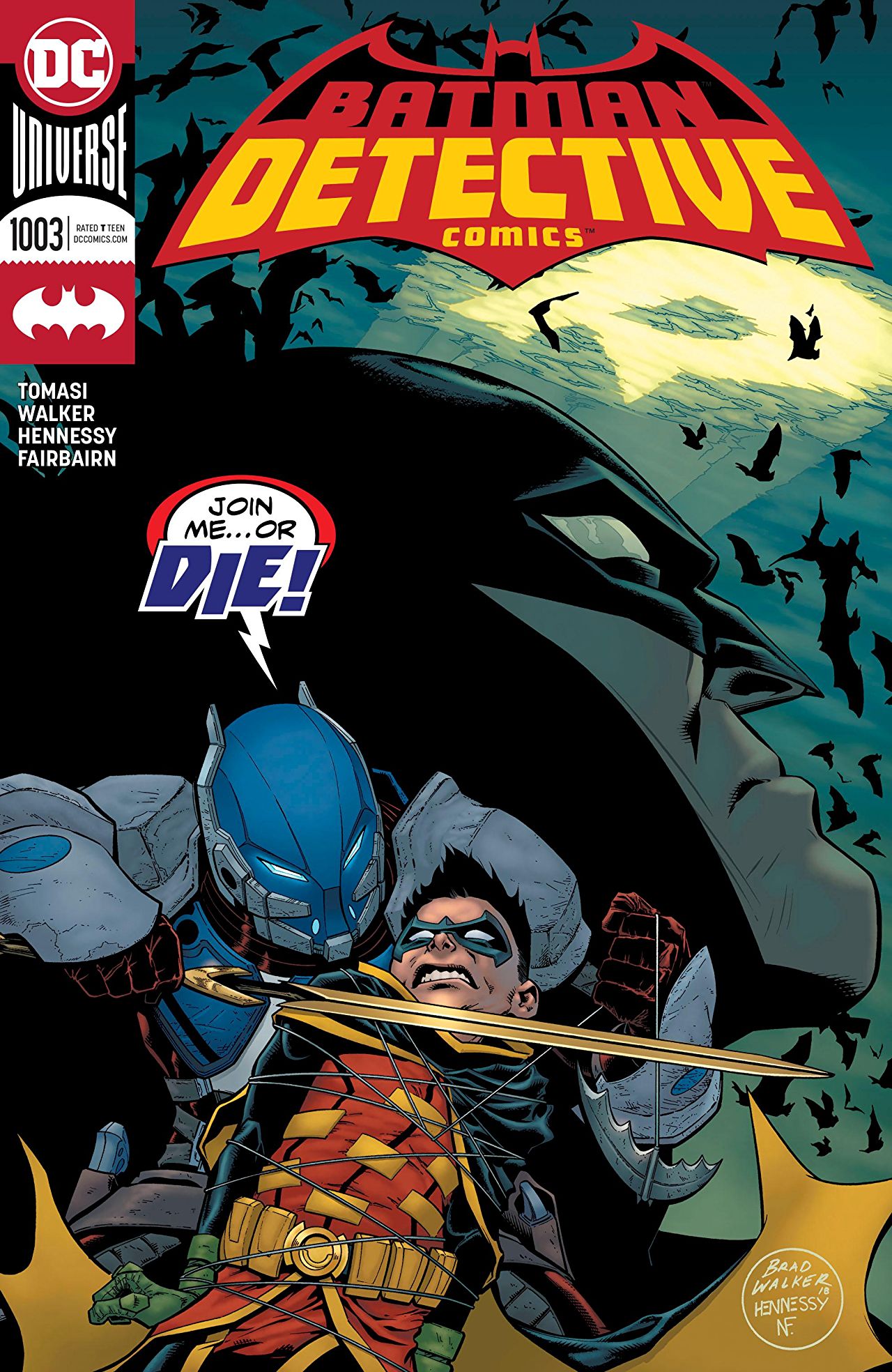 Overview: The Arkham Knight makes Damian an offer in hopes that he ends his relationship with Batman.

Synopsis (spoilers ahead): Under Aparo Bay, Batman finds Damian’s scuba gear and remnants of the day bomb that went off in Gotham. After returning to the Batmobile, Batman radios Alfred and tells him the day bomb radiation spiked across Gotham waterfront. He asks Alfred if there is any update on Damian. Alfred tells him he is plugged into all the CCTV cameras, and he still cannot find him. He asks if this is one of those times where Damian decided to go dark. Batman responds this time feels different. There is something wrong.

With her mask off, the Arkham Knight reveals her identity to Damian. She tells him the only way to build trust is to reveal herself and be honest. Damian still does not know who she is, nor does he care to find out. However, she cares. Since she cares, she cannot stand idly by and see Damian being placed in danger because of his association with Batman. Damian tells her that her words are hollow because of all of her followers’ arrows are pointed at him. She commands them to lower their weapons. They question her because Damian broke the collarbone of one of the followers and the back of another. She reiterates they lower their weapons. One of them refuses her order and shoots an arrow through Damian’s shoulder. In response to her follower’s disobedience, she cuts their arm off. Damian uses this situation as a distraction and grabs a bow. He takes the arrow out of his shoulder and readies it on the bow. The Arkham Knight again tells her followers to lower their weapons. She tells Damian he can leave. He asks why, and she tells him it is a measure of good faith. This is a gesture for him to remember when the eclipse comes.

Batman asks Alfred if the drones have given them more clues. Alfred tells him their efforts have been unsuccessful. Batman tells him to call off the search, for he now knows where Damian is. Damian hijacked the Bat-signal to display his Robin logo instead.

Batman tells Damian he is impressed with his creativity, and also he is concerned with his shoulder wound. He just tells Batman it is a flesh wound and is no big issue. Damian tells Batman he was ambushed by the knights Batman faced in the park. Batman asks how he escaped her, and Damian asks how he could possibly have known that Arkham Knight is a woman. Batman says he watched the videos of their fight that were posted on social media. Based on her movements and reactions, he deduced the Arkham Knight was a woman. Batman asks Damian how he knew. He tells Batman that she revealed herself to him. She took off her helmet to build trust. All he could determine were general features and age range, nothing specific which could be used to identify her. Damian says she let him escape and is why he is at the Bat-signal. He wanted to be sure she did not place a tracker on him. Batman tells him there is no tracker, but, asks where he escaped from. Damian says he escaped from Arkham.

Back at the Batcave, Damian draws a portrait of her face. Bruce comments on how talented of an artist Damian is. Bruce says he does not recognize who she is and hopefully his facial recognition program can. Due to her follower’s weaponry, he has updated their suits to counteract their weapons. To travel to the Arkham Knight’s base, they will need to travel through Gotham’s sewers. Fortunately, Bruce already has a vehicle for this situation. Damian asks to drive the submersible through the sewers, and Bruce reluctantly agrees.

The Arkham Knight tells her followers they have chosen to embark on this crusade of their own free will, knowing this journey would demand their complete loyalty and service. They would do whatever it took to bring about the eclipse. Sacrifices will have to be made, vows were promised, and edicts to be followed. She tells Dr. Phosphorus to exit his cell and come forward. He tells her he is quite satisfied with his cell, but she assures him there would be no judgment for him today.

The two followers who ignored the Arkham Knight’s earlier commands kneel before her and Dr. Phosphorous. She has cast her judgment, and she judges these sinners. Dr. Phosphorus kills both of them. She tells her followers the symbols on their backs and armor are not just for show. They are rays of hope for the hopeless. She tells them to take in this moment, as soon, the city will be bathed in light. The next stage of the eclipse starts now.

Racing through the sewers, Batman and Robin arrive at the Arkham Knight’s base, only to find her and her followers have left. Dr. Arkham comes out of the shadows and tells them these followers will follow his daughter, Astrid Arkham, to the ends of the Earth.

Dr. Arkham is the director of Arkham Asylum and has a unique place in the Batman Universe. However, this is the first time his daughter is mentioned in continuity. The only thing we know about her is she leads a cult of followers who want to make Gotham a brighter place.

I really enjoyed the Bruce and Damian moments in this issue. Tomasi has a great handle on writing their relationship.

Brad Walker’s art in this issue is much better than the last one. The panels are framed better and the scenes flow nicer. The action sequences, although very busy, are pretty easier to follow.

Final Thoughts: Although this issue moved the plot along, I still feel empty. I hope the next issue dives into the motivations of the Arkham Knight and her followers. I want to know why they are doing what they are doing.