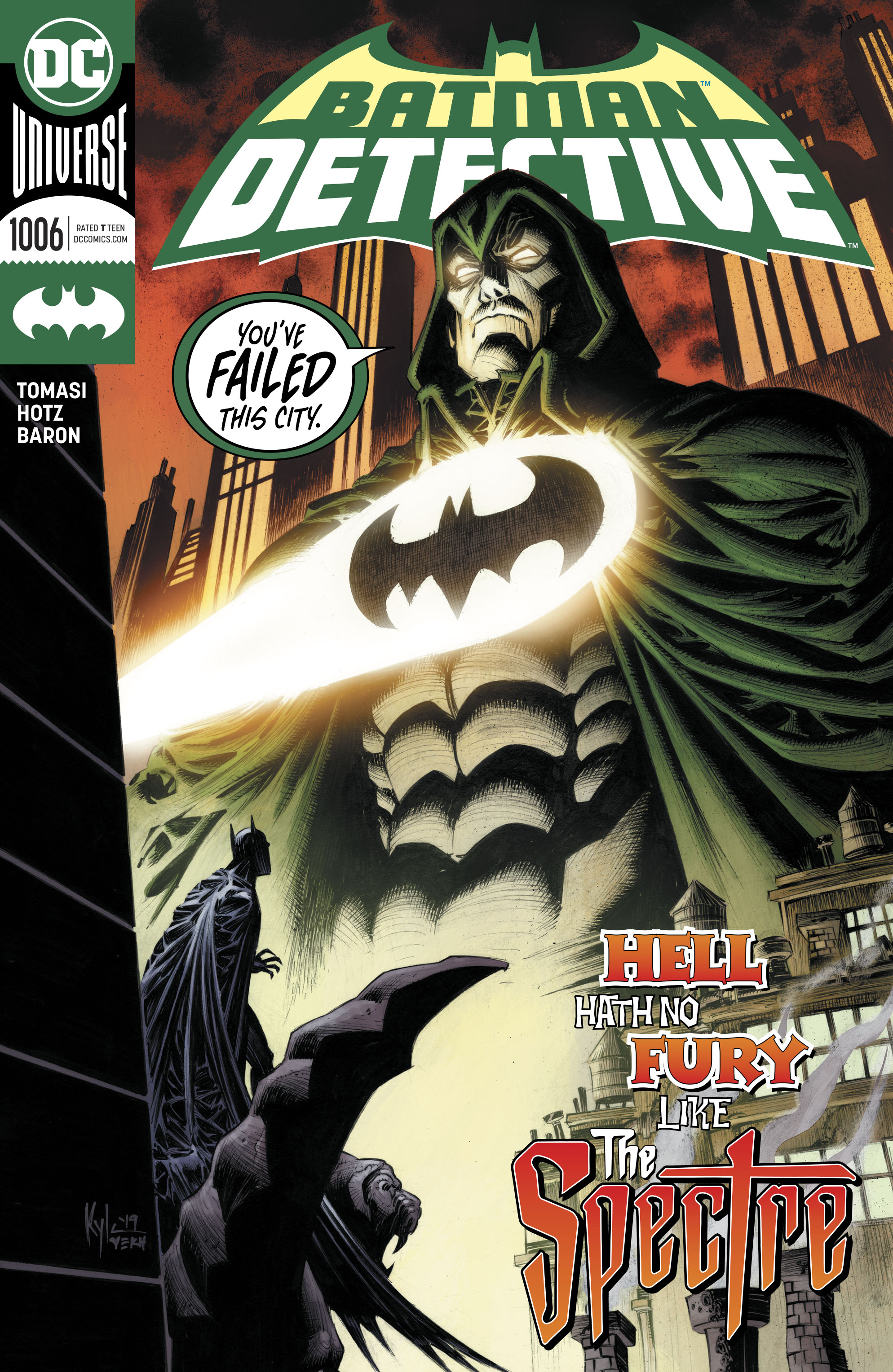 Overview: The Spectre asks Batman for his help in solving a murder.

Synopsis (spoilers ahead): Detectives Corrigan and Martinez are enjoying a small break at a diner while on patrol. During their meal, they receive a call from dispatch calling them to the scene where shots have been fired. They show up to the scene, and there is a man slumped against the wall. All evidence points to him having knelt against the wall. Out from behind the detectives, a group of green men in robes attack the detectives and shout: “The host must die. Long live the host!” After all seems lost, the Spectre is summoned out of Corrigan’s body and into the fight. While the Spectre is dealing with the majority of the attackers, a small contingent sneaks up to Corrigan, inject him with a sedative and kidnaps him. The Spectre immediately notices something is off since he cannot feel his host.

On the roof of First National Trust, Batman stops a heist from happening. After the skirmish, Alfred tells him shots were fired in the area, and he should go look into it. As Batman heads to the scene, the Spectre garners Batman’s attention as he stands in front of him the size of a high rise. He tells Batman he has been looking for him and needs his help. Batman says he thought they would not meet again. The Spectre tells him they have much to talk about, and Batman tries to run away. While trying to use his grappling gun to soar to a different building, the Spectre just plucks Batman from the air by his cape. The Spectre, though quite annoyed, tells Batman to stop running away and teleports them to the scene of the gunfire.

Batman asks why the Spectre has come looking for his help. The Spectre explains a man’s life is in danger and he needs the world’s greatest detective. Batman is still unsure and asks if he really does. After all, the Spectre is the Spirit of Vengeance. He also asks how no one was able to see the Spectre when he was three hundred feet tall. The Spectre responds he only needed Batman’s attention, not the city’s.

Commissioner Gordon and the CSI team walk through the crime scene and gather evidence. Batman and the Spectre walk among the group with Batman realizing Gordon and the GCPD cannot see them. Batman comments on the level of violence of this crime scene. He walks over to a victim and immediately recognizes him to be Detective Martinez, the partner of Jim Corrigan. Batman turns his attention to the bloodied wall littered with green fabric stuck in the dried blood and says whoever did this crossed a line. This person enjoyed doing this.

The Spectre denies, saying he did not enjoy it. It was simply justice for the murdered detective and the unknown victim slumped against a wall. Batman yells that what he did was not justice; it was a slaughter. Though the Spectre has had this argument countless times with people, it still does not change who he is: he is God’s Vengeance. As angry as can be, Batman tells him he does not care what he is. He thought the Spectre needed his help finding a murderer only to find out he murdered others and tampered with a crime scene. The Spectre says he needs his help to find Martinez’s partner James Corrigan. Batman tells him he will solve this murder without the excessive use of deadly force. Before the Spectre leaves, he tells Batman there is a great deal Batman does not know about his and Corrigan’s relationship.

Elsewhere, the green men in robes from before chant “The host must die. Long live the host!” during a candlelit vigil with the body of James Corrigan before them.

Analysis: I was not a fan of this issue after the first two readings. After reading it again for this review, I realized there were many good moments in this issue which I missed in earlier readings.

I like how Tomasi sets the theme for this run. In the previous arc, he focused his attention on the “light.” The Arkham Knight’s goal is to bring Gotham into the light. The Arkham Knight created a day bomb and made a good portion of Gotham blind for days. But, this issue sets up the true nature of Gotham, dark and grim.

The art grew on me each time reading it. My initial reaction to it was the same reaction I had to Kelly Jones’ art for the Geoff Johns’ story in Detective Comics #1000: I thought it is was really awkward and bad. After digesting this story, I have come to appreciate the art even more. I think he particularly did a great job during the fight scenes. The rest of the creative team did a great job with this issue. If I were to have one complaint about the art, it would be about the ears. They seem to be a bit too long. It reminds me of Batman’s costume in the Justice League and Justice League United cartoons. I really think Hotz and the creative team did a great job in bringing Tomasi’s story to life.

Final Thoughts: All in all, I felt this was an intriguing first issue to an arc. The art and story complemented each other well. I loved the dynamic between Batman and the Spectre.