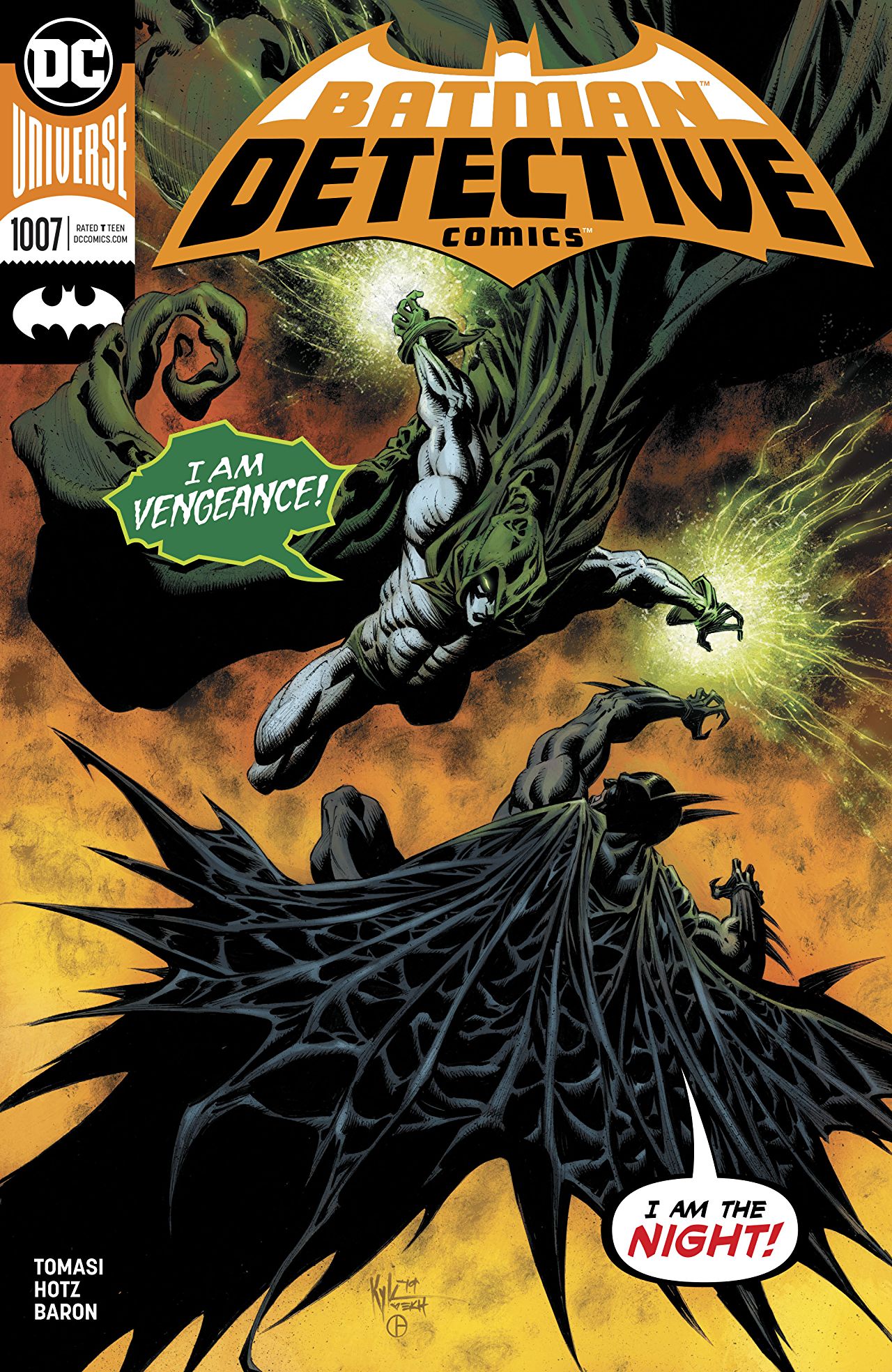 Overview: Batman and the Spectre are on the hunt for James Corrigan.

Synopsis (spoilers ahead): James Corrigan screams for the Spectre to show up. He threatens these followers who are holding him captive and threatens to kill them all. One of the followers tells him the connection between himself and the Spectre will be terminated.

In the Batcave, Bruce re-examines the crime scene virtually with the use of holograms. He removes any GCPD member from the scene, examines the deceased’s wounds, and checks the area for any unusual debris. Bruce feels there is something wrong and shouts for the Spectre to reveal himself. The Spectre manifests and says it was always his attention to announce his presence. Bruce goes to put his cowl on, but the Spectre insists that is pointless. He is the spirit of God’s vengeance, a mask is a trivial thing. Bruce asks why Corrigan is so special to him. The Spectre shares they are one in the same.

In order to explain the situation, the Spectre allows Bruce to see his memories through the eyes of Corrigan. Corrigan had always wanted to be a police officer like the generations of Corrigans before him. Earning his detective shield was the proudest day of his life. He led many good cops to save the soul of New York. Along the way, he lost good and honorable friends. He pushed the ethical limits to stop crime. Unfortunately, all actions have consequences. One of the criminal organizations he tried to stop sent a few men to tie him up and throw him into the lake. While drowning, he pleaded for a second chance at life. He saw an intense light telling him he was not worthy of heaven, but not that unworthy to go to hell. He was bound to the Spectre and has been on a war against crime ever since.

The Spectre shares he is going to rejoin Corrigan by any means necessary. Bruce says he will help him find Corrigan only if the Spectre swears to not give in to his bloodlust. The Spectre says it is his nature, but insists only blood will be spilled, no deaths for tonight.

Bruce shares that although Spectre contaminated the crime scene, he was still able to find a small piece of fabric left in the alley. This fabric has a tip of a finger seared to it. Bruce has the Batcomputer analyze the finger and discovers that the fingerprint belongs to Rick Zoeller.

The Spectre takes Batman to a prison cell and confronts a man named Nigel Walker. He demands to know where Ray Ambrose is. They were previous associates and pulled several heists together. The Spectre threatens the man to tell Batman everything. After agreeing to their terms, Batman admits he never thought he would be the “good cop”. Batman and the Spectre go to Ambrose’s apartment and look for any clues. Batman looks at one of Ambrose’s boots and finds a shard of wood. After analyzing it, he determines it is from Grace Church.

Batman and the Spectre enter the church and hurriedly look for Corrigan. After finding him, Batman and the Spectre stop the cult from killing Corrigan. Batman throws a batarang at Corrigan’s restraints, and Corrigan enters the fight. A fire is spreading, and they all need to leave before the fire consumes the church. All except one of the cult members escaped the fire, and Batman tells the Spectre to honor his promise and save the life. After retrieving him, Batman thanks him for keeping his promise. Batman looks to Corrigan and says he needs to leave Gotham. Corrigan says he put in a transfer back to New York a few weeks ago, and it is only a matter of time before he returns.

Analysis: This issue was lackluster. There was not much going on besides Batman and the Spectre arguing. Really, the only interesting and worthwhile moments were when they were arguing.

This two-issue arc was extremely underwhelming. I do not know what else to say besides it was disappointing.

I was not a fan of the art in this issue. Actually, I have not liked the art in the last two issues. It looks cartoonish at times. My biggest complaint is Holtz draws people with muscles not proportional to their bodies. Just look at Bruce, he looks ridiculous. His back muscles are so defined it looks like he has developed a hunch like the crippled man in the film 300.

Final Thoughts: After a good start with the Arkham Knight, this arc seems like filler. The plot is simplistic, the dialogue has been mediocre, and the art has been weird. I hope this is not the start of a downward spiral for Detective Comics going further.