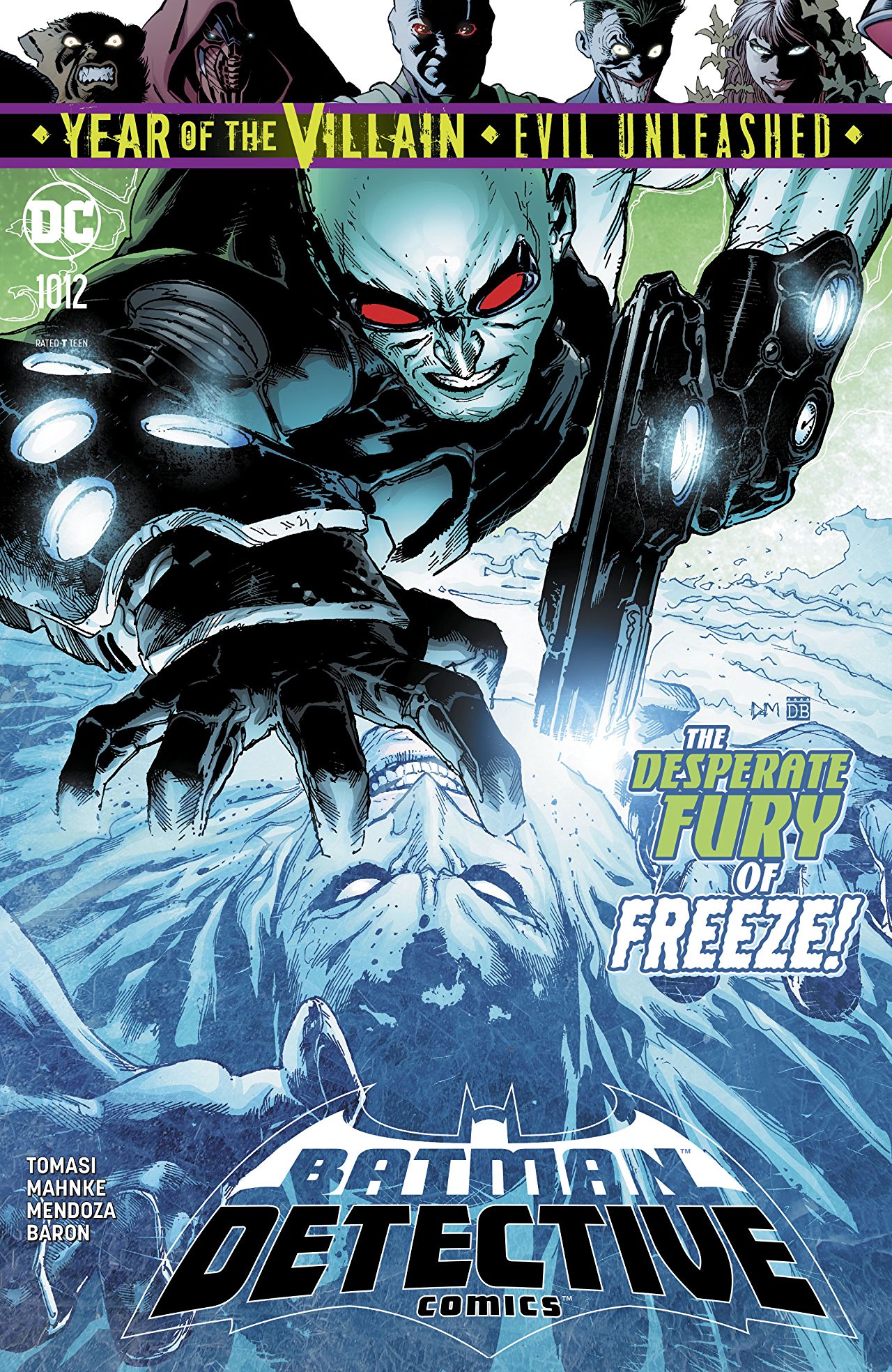 Overview: Our mystery with Mr. Freeze thickens or, perhaps, it thaws! What has Mr. Freeze been up to all this time?

Synopsis (spoilers ahead): We begin with a pondering Batman, musing over the creation of snowflakes: how delicate and fragile they can be.

We then cut to the Gotham Dockyard, where Batman looms over a once-great yacht. He muses how it was one of the first places he ‘tangled’ with Selina. But now, under a gentle snowfall and after the passage of time, it is nothing but a memory.

Next, in the Gotham Pine Barrens, we find Mr. Freeze with romance also on his mind. He speaks of Nora, his true love, and of her resurrection. He takes off his helmet in a demonstration that the new nanotechnology bonded with his skin, allowing him to live without its aid. Freeze hopes that this technology will work for his love. Interrupting his thoughts comes a message from “Team 1”, indicating that they have tranquilized a woman in her car. Freeze cautions them to transport her with extreme care. Team 2 also chimes in, saying they have their own target apprehended – another woman with blonde hair that bears a striking resemblance to that of Nora. Team 3 attempts their capture but engages with the woman who ends up splitting her head open. Unsuccessful, they leave her on the floor in her home.

These women are brought to Mr. Freeze in the Gotham Pine Barrens, where he reveals that Lex Luthor has given him a serum that ostensibly can bring Nora back to Freeze, allowing her to stand by his side once more. But, ever the skeptic, Freeze couldn’t risk using the serum on Nora without proof. Thus, he arranged his own project, replicating the conditions of Nora’s current state to determine if the serum would be successful.

Cutting over to the hangar of the Batwing, we see Alfred repairing the machine while Bruce deadlifts a large amount of weight. They both listen to a variety of calls coming into Gotham Central’s emergency line – the majority trivial matters. However, a case where a lady had two men break into her home in an attempted abduction draws Bruce’s attention. He calls Alfred over to listen and decides to head out.

Down at GCPD Headquarters Officer Conway and Captain Bullock discuss that two more women have gone missing for a total of four this week. Bullock heads to the roof to light the Batsignal only to find that Batman is already there, eager to learn more about the missing women. They exchange information, revealing that Gordan has been taking time off after the events found in The Batman Who Laughs mini-series.

Back at the Gotham Pines Barrens, we see Mr. Freeze with his teams and the women they captured, all frozen cryogenically like Nora. Freeze announces that the experiment is progressing well, and soon it will be time to administer the serum. He asks Team 3 where their subject is. After a failed attempt to lie about the situation that occurred, they tell Freeze the truth. Freeze is furious that one of his men assumed to know what Freeze would have liked instead of following orders, encasing his head in spikes of ice. Freeze demands that his teams return to retrieve the subject. But when they return to the scene of the crime, Batman is ready for them!

Analysis: Yes! Finally! I’d like to take a minute to squeal in joy. This issue was fantastic! From the symmetry between Batman and Mr. Freeze both musing over their lost loved ones to the inclusion of Year of the Villain, this issue just works. Tomasi hits with the emotional beats, both further humanizing Bruce while also providing more depth to that of Mr. Freeze. Yes, his stories always center around Nora, and this doesn’t change, but his meticulous planning and ability to replicate the same pain Nora went through on multiple innocent women shows his true colors and the depth of his villainy. He claims that he acts out of love, but the irony stands that he has perverted the idea of love to accomplish his goals. Tomasi continues to excel with the smaller moments, writing compelling scenes between Bruce and Alfred, and Bullock and his officer. The synergy between bombastic action, mystery, and emotion is very well done.

Mahnke, Mendoza and Baron all create a stunning issue to read. The linework contains the usual amount of detail you’d expect from Mahnke, and it’s all inked and colored beautifully. I really enjoy the contrast between Batman’s suit and the desolate surroundings he finds himself in. Mahnke excels with minute details, like ensuring that during the symmetry stage of Batman and Freeze longing for their loved ones, Batman is turned left, while Freeze turns right. There’s a poetic nature at work that needs to be complimented. Mendoza’s inks provide crisp, clear imagery that allows the pencils to really pop. All in all, it’s a wonderful job.

Final Thoughts: My hope for this run has been thawed from its cryogenic chamber, emerging revitalized and energetic. This is an excellent beginning to a long-teased arc.