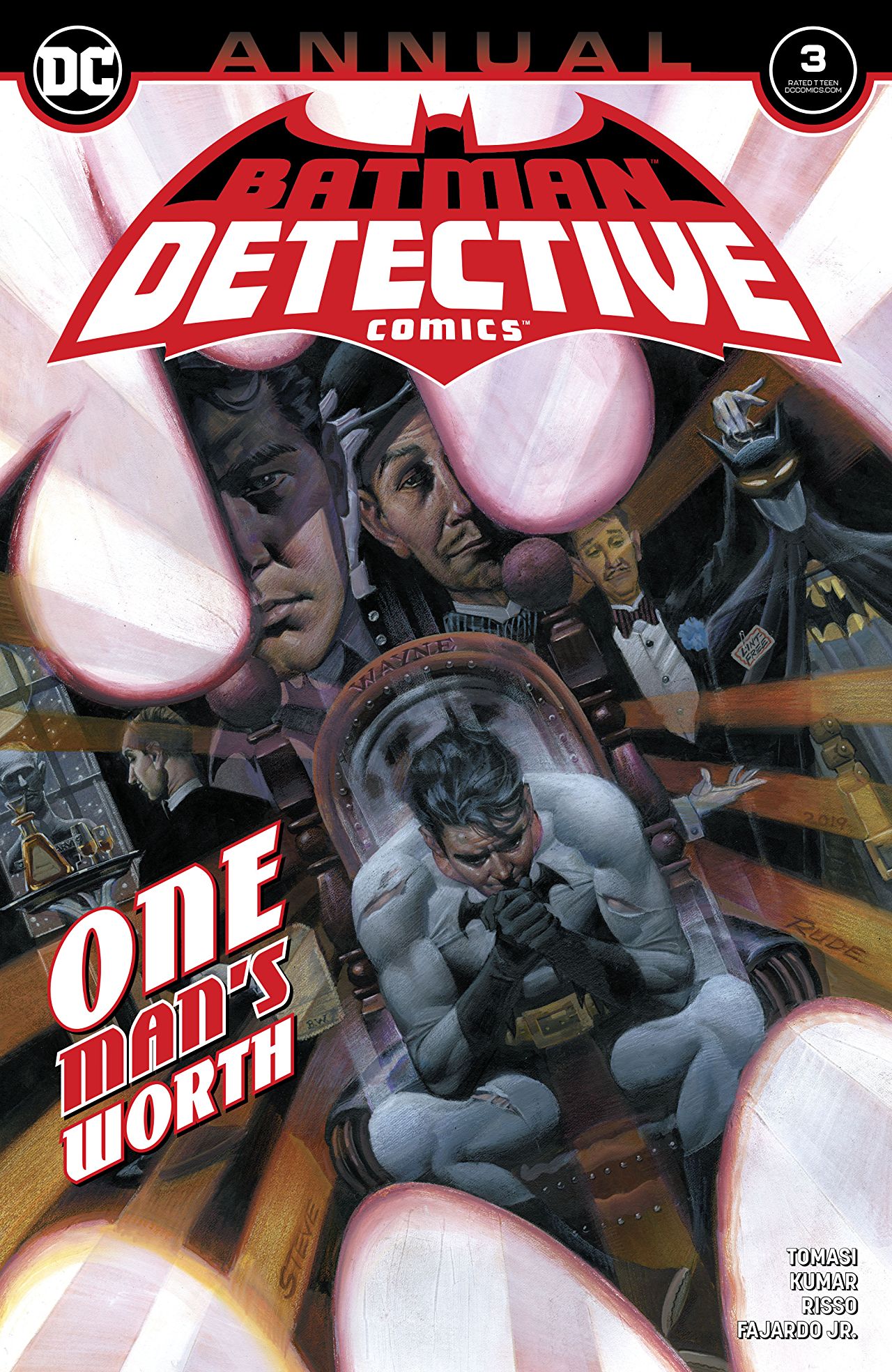 Overview: Fresh from the death of his most beloved friend, Batman attempts to bring Alfred’s most enduring case to a close.

Synopsis (spoilers ahead): Then: A gentleman is confronted by two bank employees who tell him he had not been expected. The gentleman tells them that he was just collecting receipts, to which they slip back into their native Russian tongue and reveal that they know that he is, in fact, Agent Alfred Pennyworth. A tangle ensues, and Alfred gets the slip on them. Through exposition with another agent over radio, we realize that Pennyworth had been sent to retrieve contraband from Russian spies. Soon after, he is extracted from the mission by airplane.

Now: In a fiery elevator shaft, Batman pries open a door, revealing a woman and a wheelchair-bound boy. Walking them through steps to assist their escape, they flee the burning building from which they had been trapped. After acknowledging the boy, Abed, as a hero himself, Batman quickly jumps into the Batmobile and heads back to the Batcave. A woman watches on from a nearby rooftop.

Batman races into an empty and disorganized Batcave, and Bruce Wayne disrobes and ascends the staircase into the equally lonely Wayne Manor. Exhausted, he fails to notice the other figure in his home until she clicks on a light. She reveals herself to be Agent Marigold Sinclair, an ex-associate of the former Agent Pennyworth. Finding herself in need of some assistance, she had come to Wayne Manor to seek Alfred out. Hearing of his death, she appeals to Bruce instead. She tells him the story of the events from the first few pages of the issue, adding that the contraband Alfred had stolen were documents that not only detailed every Soviet safehouse but also that Alfred’s closest friend, Kendall Pierce, had turned traitor. Unfortunately, before Alfred was able to bring Pierce to justice, he left the MI-6 to take care of the Wayne Family’s orphan, Bruce Wayne.

Agent Sinclair informs Bruce that Pierce has now been found, and she wishes to close the book on Alfred’s most devastating case. However, she’s unable to get any assistance from the MI-6 itself, it being a cold case and, for all intents and purposes, a useless venture. Subtly revealing that she knows his identity, she asks him and some of his own associates to meet her in the Ukraine in two days.

Two nights later, Batman enters the hotel, finding a note instructing him to follow a specific car. In doing so the driver, Agent Sinclair, takes him to the site of the training city Alfred had infiltrated all those years ago. Sinclair exposits that this is where Kendall Pierce has come to die and that this is where she wishes to bring the traitor to justice. She would be unable to follow him inside, compromising her own cover, but she would keep in touch with him over a scrambled channel.

Once he enters the training city, we narrow down to Batman’s POV. He verifies the truth of Agent Sinclair’s story and begins his trek inside to find Pierce. He’s not too far in before he is attacked by the  NKVDemon. This NKVDemon is not the assassin Batman has faced before. Finding his foe easily telegraphed, Batman puts his plan into place and allows himself to be captured by the NKVDemon and brought before an aged Kendall Pierce. Pierce exposits that he had been left behind by the British and was brought into the Soviet fold. When the USSR fell, he had nothing left but the Demon. In the midst of his villainous speech, he is shot in the shoulder by Agent Marigold Sinclair, who is beset upon by the NKVDemon. Before the Demon is able to take her down, Batman intervenes and quickly decommissions him.

Agent Sinclair aims her gun at Pierce and expresses her anger at his betrayal, to which he counters in saying that he was merely a third wheel to the team of Sinclair and Pennyworth. He then mumbles something low and inaudible to the reader before continuing on. He has no regrets for his life’s decisions. Sinclair fires her weapon into the wall just above his head, choosing to honor Agent Pennyworth by punishing Pierce not with the quick death he expected, but a slower one within the walls of a prison.

Several days later, Bruce Wayne chooses to honor Alfred by taking care of himself and the drab house he lives in. He is granted another secret visit by Marigold, who begins to tell Bruce her own stories of the life and times of his most faithful ally and friend, Alfred Pennyworth.

In the backup, “The Week”, we are given a story narrated in letter form from Alfred to Marigold. This letter details Alfred’s week in caring for Master Bruce in small but invaluable ways, downplaying the actual duties we see portrayed in the art in that he has been given over to in helping create the Dark Knight.

Analysis: As the cover states, this story is about One Man’s Worth. This issue serves as a celebration of the life of Alfred Pennyworth, giving him center stage and giving us a tale of spies and betrayal underlined by honor, loyalty, and love. We are almost never ready to lose our loved ones, and when we do there is often, for a time, a lingering lack of finality.

This is evidenced here as we learn that Alfred had a painful, decades-old loose end that was never able to be tied up in his lifetime. The shocking betrayal of his closest friend must have haunted him for years, and not even Bruce Wayne knew about it. How many times must Alfred have thought of Kendall as he comforted Bruce when faced with the likes of Harvey Dent, Thomas Elliot, or Jason Todd?

The plot itself is rather simple enough. No big twists or turns other than the fact that Kendall Pierce turned traitor. The action is straightforward, but that isn’t really the point of this issue. It’s about the impact and legacy left behind in Alfred’s wake.

Without him, almost everything falls apart for Batman. The cave is cluttered, the Manor is bleak and lifeless, and Bruce’s health is in such disarray that he doesn’t detect Marigold standing before him. He even needs to be reminded to get groceries. Also, that suit must smell rather unpleasant.

Marigold Sinclair arrives to give Bruce another look into the life of his father figure. The marigold flower symbolizes grief, and her presence in this story leads him from the depression stage of his grieving at the beginning to his final acceptance by the end. It is she who turns on the small light in the Manor when Bruce is at his loneliest and bleakest, and by the end, when the Manor feels more lively and colorful, she is the one who sits with him and shares happier memories.

“The world changed, Marigold, and I was offered a path that promised more than just silent honor and obedience.” This line is spoken by Kendall Pierce as he waits to be killed by his former partner. But if we think about this line, we see that it applies to the three MI-6 operatives. Obviously, Pierce chose his path of running to the USSR, believing its ideals to be the way of the future. He inherited the NKVDemon, a mindless brute for Pierce to control. Marigold continued to work with the MI-6 even to the present day, and, though we know little of her life outside of these pages, it’s clear that she remained married to her job. She is the same woman today that she was all those years ago. But Alfred’s path closely mirrors Pierce’s. He left the MI-6 to become a father figure, not to some muscled puppet, but to raise a principled and honorable ‘son’ in his own right. He chose to become happy.

By the end, Bruce Wayne has not only finally accepted his loss but also finds that in himself is Alfred’s legacy. He has inherited his sense of duty, honor, and passion.

The backup story is touching, too. Often, we see an Alfred who is less than approving of the life Bruce has chosen. He wants him to lead a happier, ‘normal’ life. But here, we see a story that’s more adoring. Alfred acts as a father, cleaning up his son’s wounds, building him up, and setting him off again. It reminds me of a father getting his little boy involved in sports. Indeed, he’s helping him live the life that Alfred himself had lived as an agent. It’s sweet and a nice little bow to the issue.

The art in the main story is pretty decent. It has a very 90’s feel. I wasn’t too keen on the art in the backup, however. To me, it seemed a little rough and inconsistent. But it didn’t detract from the story itself.

Final Thoughts: This is a touching eulogy for Alfred Pennyworth, and the arc it represents sees Bruce Wayne through the final stages of his grief in a way we are most familiar with Tomasi’s thoughtful storytelling.