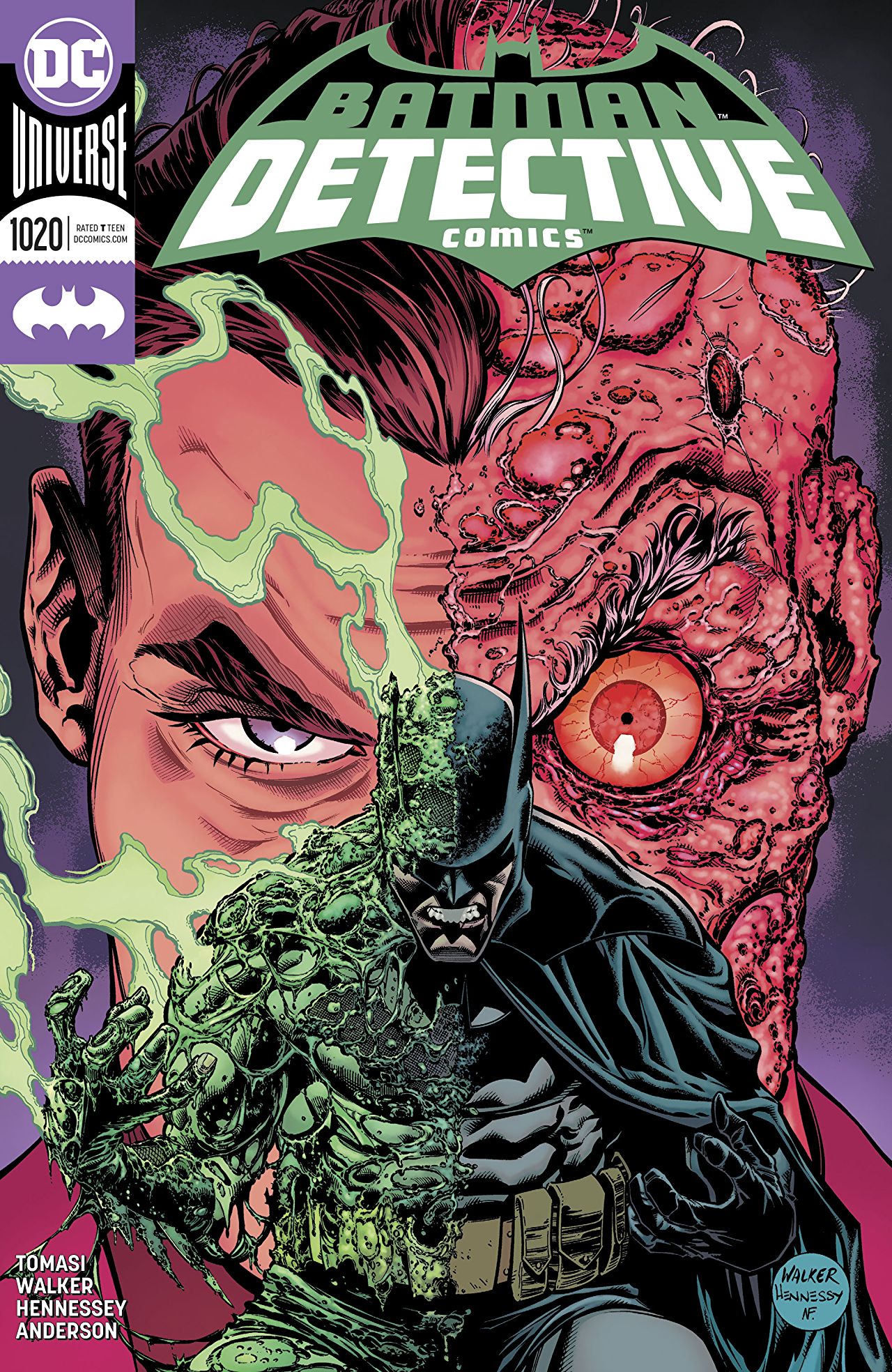 Overview: Two-Face returns to Gotham for the first time post-City of Bane. This time, he has a new, unexpected gang with him.

Synopsis (spoilers ahead): Two voices are talking in the backdrop of Gotham City – one verbally, the other subconsciously. The live voice is comparing Gotham and its people by day to Gotham and its people by night. At the same time, the subconscious voice is complaining about an itch inside his skull; he would do anything to get it out. As the scene pans out, we realize that the individual speaking is Harvey Dent, trying to squeeze some gangsters on a coin deal. As the goons reject Harvey’s proposal, he tells Two-Face to flip the coin. It lands with the scarred side face up, leading Two-Face to start shooting.

Later, Batman is at the crime scene, looking over the evidence left behind. He realizes that all of the silver dollars have been taken with the exception of the one from 1922. As he kneels beside the dead twin Demarco Brothers, who have had both of their eyes shot out, he realizes that Harvey Dent has made his return to Gotham. Further investigation shows that the brothers were able to get shots off as well before they met their demise. As he investigates even further, he notices a trail of blood near a wall riddled with bullet holes. Batman uses a tool from his utility belt to remove a bullet from the wall. He returns to the Batcave, where the Bat-Computer confirms what he already knows – the blood on the bullet belongs to Harvey Dent. This leaves Batman wondering where Two-Face could be and what his next move might be.

At UrgentMD, Two-Face is anguishing as a doctor attempts to remove the second of two bullets from him (the first bullet went in and out). The second bullet is more difficult than expected. Two-Face doesn’t want to hear this, and as he threatens the physician, he screams in extreme pain. As the doctor attempts to apologize, Harvey flips the coin. It comes up on the non-scarred side. Harvey, in turn, apologizes for putting the physician in a difficult position. He mentions that the scarring on his body is new and understands if it’s unnerving to the doctor. The doctor replies that he doesn’t have a problem with Harvey’s appearance, but does with the bullet that’s lodged in him. As Harvey groans in pain again, he flips his coin again – it’s scarred. Before the doctor could explain, Two-Face shoots and the doctor falls to the ground. A third coin flip brings Harvey back, and he anguishes over the fact that Two-Face shot the doctor who was only trying to help him. Confused, he realizes the bullet is still lodged in him. Painfully, he pulls the bullet out. Realizing that the doctor is still alive, Two-Face returns, and with a fourth flip of the coin, two more shots ring out.

Batman is out searching hospitals and mob clinics for signs of Harvey. Suddenly, he hears a call over GCPD radio of shots fired at the urgent care clinic. As he arrives, he notices goons, dressed in black and white pants and hoodies, dousing the place with gasoline. Before one is able to set things ablaze, Batman steps in. A battle ensues. Batman questions their intentions and why they’re wearing the clothes that they are. As he gains control of the battle and begins to question one of the goons, another pulls a gun. Batman tries to warn him about the gasoline, but it doesn’t stop the gun from going off. The clinic goes up in flames.

Batman pulls the last thug, as well as the dead doctor, from the burning clinic. He then questions one on where to find his boss. As one begins to talk, another reminds him of the oath they took. They each click a button on their wrist, which renders a quick, but painful death to each of them.

In another part of Gotham, a communion service is going on. Instead of a wafer, recipients are receiving communion of silver dollars. There’s only one voice, saying, “Two of us,” as he gives a coin to each recipient. As the last person receives his coin, Harvey Dent stands in the middle of the congregants, stating that Gotham will face all of them.

Analysis: The issue was over before I even realized it. And I didn’t get a good feeling about it after reading it the first time. The most dialogue came between Harvey and Two-Face. This was actually the most interesting part of the story – the continued conflict between the somewhat humanized Harvey Dent and his monstrous alter-ego Two-Face. But as Batman said, there is something going on with Harvey. Typically, Harvey has been the rational one. Yet, the issue ends with Harvey, not Two-Face, raising his hands in praise. Is this an evolution in the character?

There are a few other questions about Two-Face that Tomasi leaves open. Where has he been since City of Bane? The last time we saw him was in the main Batman book strapped down in front of Hugo Strange. What has happened since those events and does it have anything to do with what looks like a probe in his head? What about the fresh scarring?

After a second read, what I do appreciate about this issue is Tomasi writing Batman as a detective. Readers receive a few pages of Bruce being a detective, looking at evidence, and making deductions. I would hope that we get more of this detective work, and this detective work moves the story along smoothly.

Brad Walker’s art is ok, but it’s not his best. This could be due to the color scheme from Andrew Hennessy and Brad Anderson. Either way, the art from Walker has been better than this. Look no further than his earlier work on Tec.

Final Thoughts: As someone who has always been a fan of Peter Tomasi, especially since his run on Batman and Robin, I initially found it difficult to review this issue in a positive manner. Now over a year since arriving on Detective Comics, I’m still stuck trying to figure out where Tomasi is trying to take Batman. While it seems he is trying to put more “detective” into Detective Comics, it didn’t come across right on the first read. I can only hope that this will improve and things flow smoother moving forward.