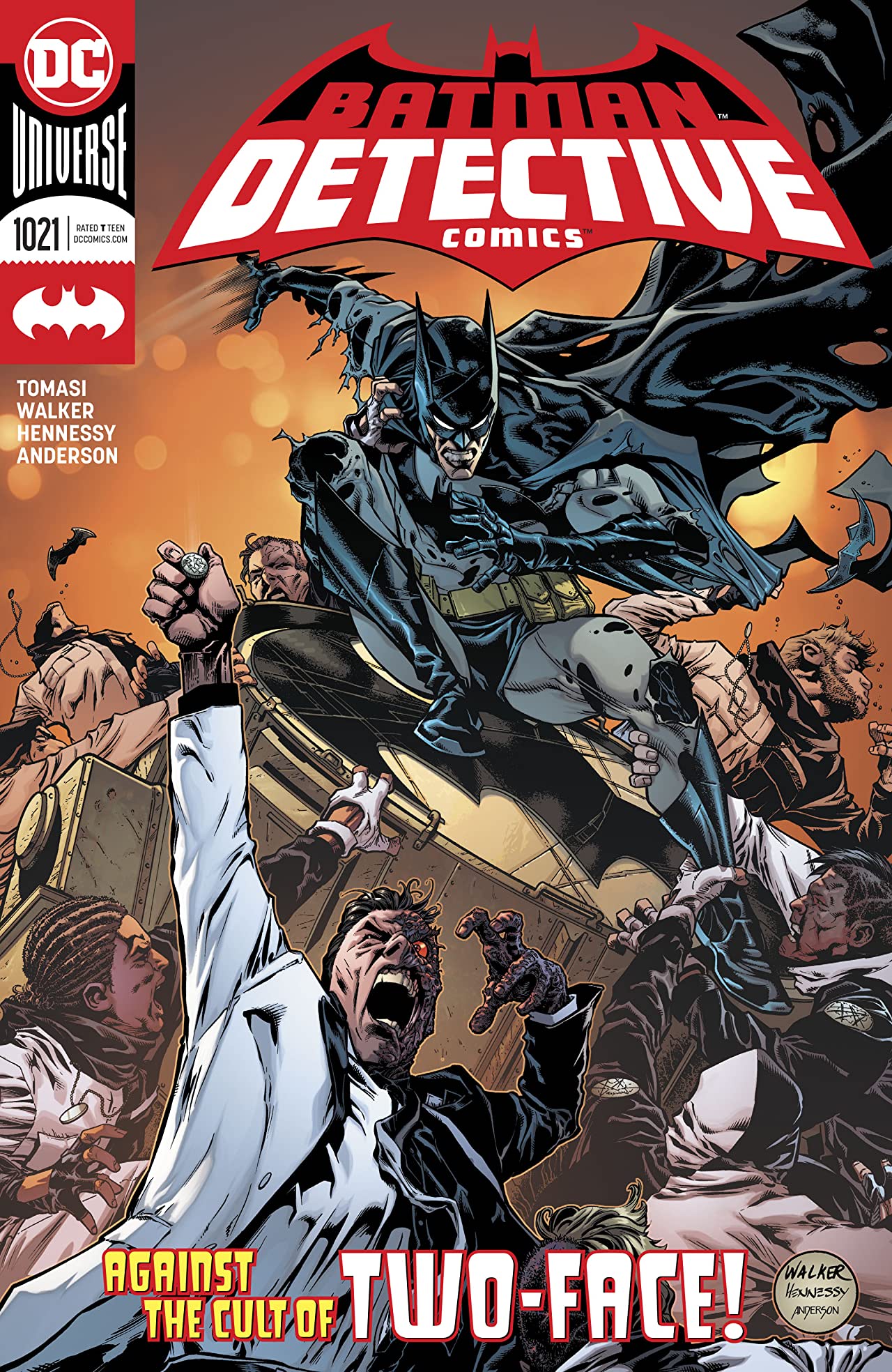 Overview: Batman’s pursuit of the newly-returned Two-Face takes a surprising twist that may be too much for Batman to handle.

Synopsis (spoilers ahead): Batman continues to look over the scene at the urgent care clinic where he took down Two-Face’s goons. He’s still unsure what Harvey could have planned, but he’s determined to find out. At the same, Two-Face continues to preach to his congregation on the way of the coin. As he continues his sermon, a headache hits and distracts him. He flips the coin, and it comes up un-scarred. Harvey tells the flock to protect and serve Gotham City, in which they are more than happy to oblige, if only for one night before their true intentions are revealed.

Batman shows up at the office of the Gotham medical examiner and – after startling the coroner – asks to examine the bodies of Two-Face’s henchmen. He takes some skin samples from each and heads back to the Batcave, where analysis shows each member having a criminal record. He also finds another common link – they all have cancer. This link he determines is why criminals with rap sheets would follow Harvey to the point where they would take their own lives for him.  Further analysis shows that each of the dead men crossed paths at the Gotham courthouse. This is where Batman heads next. As soon as he clears the waterfall masking the entrance to the Batcave, he comes to a complete stop. Standing in front of him and calling out a “Bruce!” is Harvey Dent.

Batman approaches Harvey and asks him about his plans for Gotham. Harvey explains the battle going on in his head, that the most minute of things now causes him to flip the coin. As he speaks, another headache hits him. These spikes have him feeling like he’s someone’s puppet. He asks Bruce to help him. Bruce decrees that he will help Harvey by returning him to Arkham Asylum. He tells Dent to get in the car and cuffs him.

As they drive towards Arkham, Harvey tells Bruce of some of the mental battles he’s encountered, specifically keeping Bruce’s identity secret from others, including Two-Face. He now feels he’s losing that battle and that he won’t be able to keep this secret from Two-Face much longer. As Harvey anguishes to talk, blood begins to slowly ooze from a wound in his head. Batman encourages his friend to hold on and fight. The Batmobile comes to a stop – not at Arkham Asylum, but in front of the Gotham courthouse. Confused, Harvey asks Batman why they weren’t going to Arkham. Batman is determined to find out what Two-Face is up to, and he feels the answers are in the courthouse. Batman locks Harvey in the Batmobile as he takes off towards the courthouse.

Alone and shackled in the Batmobile, Harvey begins to anguish more. He doesn’t need to be locked up because he too can save Gotham while leading his disciples in whatever way he deems. He begins pounding his shackled fists against the frame of the Batmobile. Two-Face can be controlled. With one last lunge with his feet, Harvey causes a blast within the Batmobile. At the same time, Batman is making his way through the courthouse using schematics sent to his cowl from the Batcomputer. Batman heads down to a hidden basement.

Little does Batman know that while he’s continuing his investigation of the courthouse, back at the Batmobile, Two-Face has once again taken over and replaced Harvey. Two-Face figures that if Harvey was shackled in the Batmobile, that Batman isn’t far behind either. With his head wound starting to bleed more, Two-Face takes off in pursuit of his enemy.

As Batman reaches the bottom level of the courthouse, he observes lit torches leading to a large wooden door. He opens it to find Two-Faces’ disciples chanting in worship. The room goes silent as the sound of a coin flip echoes throughout the chamber. Batman turns to find himself face-to-face (no pun intended) with Two-Face, holding the coin, scarred side up. Two-Face is also holding a gun, which he fires, leaving Batman riddled with bullets to the chest and cowl.

Analysis: This issue doesn’t have the same good feeling as the first issue of the arc. Aside from the detective work, which I most definitely enjoy in a book titled Detective Comics, I’m left looking at things that don’t necessarily make sense.

There are two big ones in my opinion. The first, why does Batman not go straight to Arkham with Harvey as he stated? Is solving the case more important than the well-being of his long-time friend? If there’s one aspect of the Batman/Two-Face relationship that we have always seen has been Bruce’s determination to make Harvey Dent as whole as possible again. Wouldn’t making that happen squash whatever plans Two-Face had brewing?

This leads to the second matter that I have with Tomasi’s writing here. Even if one can forgive this notion of Bruce not caring for Harvey’s well-being, why would he leave Harvey in the Batmobile alone? This isn’t, of course, the first time we’ve seen this. The mental slip and conflicts Batman has been experiencing can also be seen in a sense in how Tom King and James Tynion IV have written Batman since the death of Alfred. For some reason, it doesn’t work here. Batman makes mistakes, but these mistakes seem dumb. I truly hope Tomasi moves away from this.

As mentioned earlier, I do enjoy the fact that Tomasi is allowing Batman to be a detective. In the last few issues, we have seen several pages of Batman analyzing crime scenes, doing investigations, making deductions based on the clues in front of him, and then acting on those deductions. This issue, however, finds the nonsensical concern overshadowing the good detective work that was done.

The one big question coming out of this issue is how does Harvey know Batman’s identity? The last time we might have seen this was during the New 52 in Tomasi and Gleason’s run on Batman and Robin. Like this current issue, Harvey doesn’t explain how he knows Batman’s identity, but he makes it clear that only Harvey knows his identity and that he struggles to keep it from Two-Face. Is this Tomasi’s way of tying the two continuities together? Or is this is Tomasi bringing Detective Comics closer to the events in the main Batman title? With Joker War coming, we already know that the Clown Prince knows the identity of all of the members of the Bat-Family. Could Joker have slipped this information to Harvey Dent as well? We should know by the end of the issue that the Joker will be making an appearance in issue #1022. Hopefully, the next issue begins to answer some questions.

Once again, Brad Walker’s art with colors is just okay. The one thing that really gets me with his drawing is the way in which he draws Batman and, more specifically, the shiny/glossy way he makes Batman look. It just doesn’t sit well with me.

Final Thoughts: After enjoying the first issue of the arc, I see Tec taking a step back in moving the overall story forward. It seems Tomasi is still trying to find his way with Detective Comics. I still read the book as a fan of Batman, but I hope I don’t get to the point where it becomes more of a chore than entertainment.