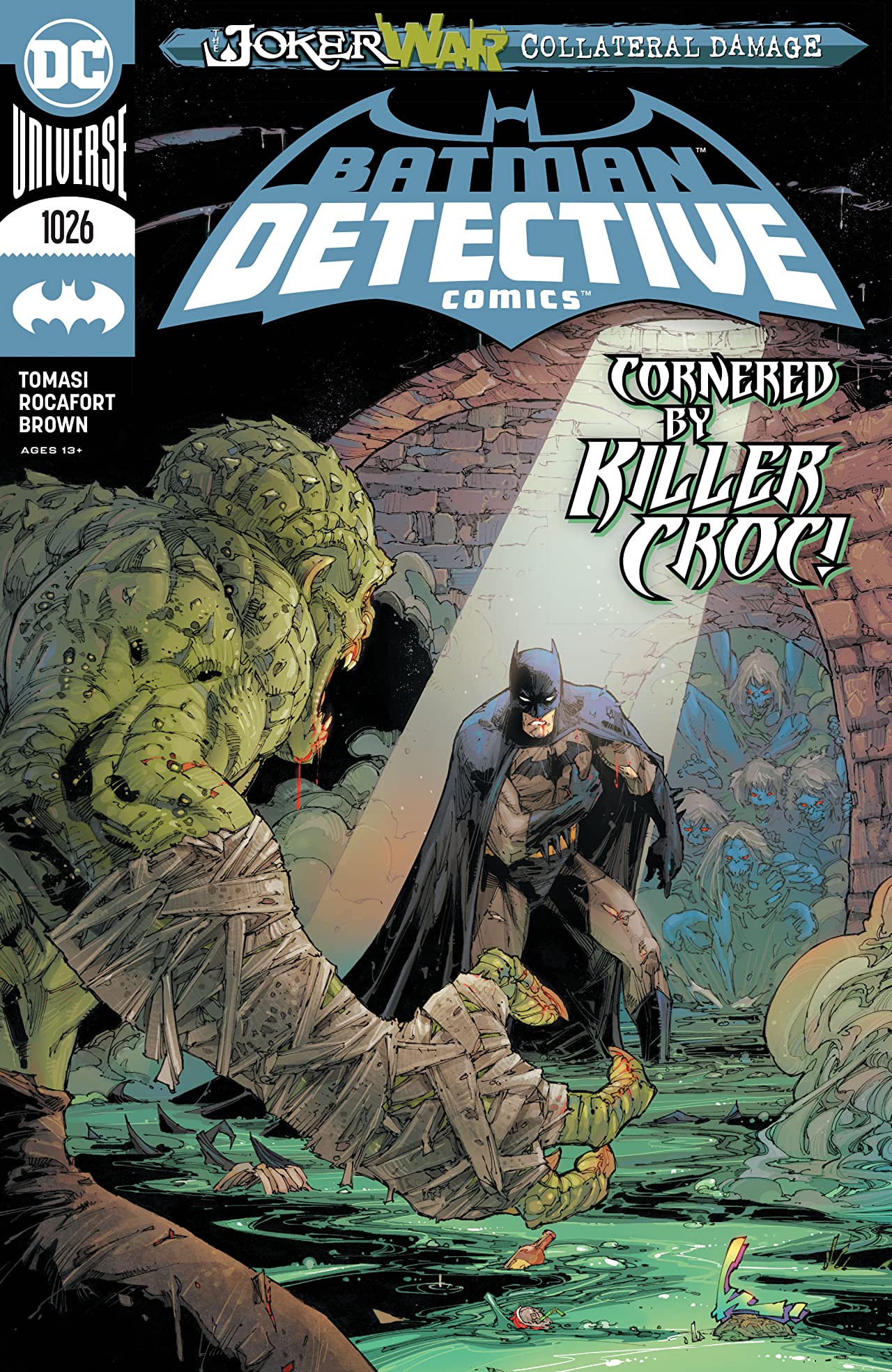 Overview: In the final tie-in issue for Joker War, Batman investigates Killer Croc’s role in a series of kidnappings. But are things as simple as it seems?

Synopsis (spoilers ahead): Standing above the streets of Gotham, Batman is pondering of the events as his war with the Joker rages on. Down on the streets below, three armored security guards are working to move some bank bags to a secure location. Suddenly, a manhole cover strikes on of the guards. The armored truck is flipped over and a large green figure grabs the other two guards, dragging into the sewers below. The third guard recovers and begins shooting into the manhole until Batman stops him, warning him of possibly hitting his partners.

After learning more about the situation, including figuring that Killer Croc was responsible for the kidnappings, Batman overhears screams coming from down the street. He arrives to find that others have also been taken as well. Batman descends into the Gotham sewers. As he advances, the suit’s computer informs him of the toxicity of the sewer water and warns him that prolonged exposure to the chemicals in the water will cause gene mutation and death. Using his audio amplifier, Batman follows the screams of the kidnapped people until he is able to locate Croc’s lair. He finds Croc with some new partners, individuals who seem to have mutated with other animals.

Croc explained how he had turned over a new leaf (see the events of Gotham City Monsters to learn more) in life until the Joker and his goons made their way to Monstertown and tore it to pieces. He decided to create a new one in the sewers of Gotham, hoping that he and the others would be left alone. He also explained how his mutated friends came to be. Croc wants to bring others down to the sewers for protection from the war above. Batman attempts to warn Croc of the dangers of the chemicals in the water, but, unfortunately, Croc doesn’t believe him. He orders his team to kill Batman.

Batman dives into the contaminated water as Croc’s gang begins to spray the area with gunfire. Croc tells them to stop and he waits for Batman to come up for air. As he does so, Batman tosses Batarangs and shock emitters, taking the gang members down. Croc challenges Batman to a one-on-one battle, stating that if Batman wins, he can take everyone in. If Batman loses, he leaves with the kidnapped individuals. The combatants go back and forth before they both go for one final blow…

At Arkham Asylum, Batman is getting Croc and his gang settled in their cells. He promises them the best of care, including a reversal of their conditions, if a cure can be found. Before leaving, he goes and sits with Croc. He thanks him for honoring the deal. As they shake hands one last time, Batman addresses Croc by his real name – Waylon.

Analysis: Detective #1026 gives us the final Joker War tie-in. Unlike issue #1025, this issue, while a good story, felt much more like a fill-in issue than an actual tie-in. Only a few panels of the issue actually makes mention of the Joker and the war raging throughout Gotham. The fact that it feels less like a tie-in factors into my overall rating.

That being said, this was still a good issue. The last time we saw Killer Croc was in the Steve Orlando mini-series Gotham City Monsters (I reviewed a few issues here on TBU). There, Croc, fresh off his time with the Suicide Squad, assisted others in stopping Chaos from occurring. The series ended with Croc taking over a hotel in the Monstertown section of Gotham that was once run by a friend who was killed. Watching over the hotel, and Monstertown itself was the leaf Batman assumed Croc had turned over in the issue. It was good to see that, by the end of the issue, Tomasi allowed this to still be the case, even though it would be served behind the walls of Arkham. It’s also touching to see the mutual respect between the two combatants as evidenced in them shaking hands at the end of the issue, but particularly in Batman addressing Croc by his real name. That was a nice touch from Tomasi.

It should also be noted that this is now the third member of the Rogue’s Gallery that we have seen redeemed to some extent in Tomasi’s run – Mr. Freeze and Two-Face being the other two. Granted, Croc had already turned over a new leaf since his days with the Suicide Squad. It makes you wonder, however, if Tomasi is building up to something down the line where the redemption of these characters gets negated. That makes for an interesting story.

The issue contained a decent amount of action between all of the players, which allowed for a quick read and the pacing between the various scenes was also appropriate, allowing the story to progress with all of the key and support characters being involved.

As with the last issue, Rocafort’s art was a nice complement to the story-telling, particularly in the action scenes. I do want to give a mention, however, to the variant cover by Lee Bermejo. It is dark, but it is absolutely stunning. The image of Croc towering over Batman is scary in a very good way, and this comes from someone who hasn’t always been a fan of Bermejo’s art. This, however, is absolutely beautiful.

Final Thoughts: Next issue is the epic Detective Comics #1027, celebrating one thousand issues of Tec involving Batman and the Bat-Family. This being the case, I would expect (hope, actually) that this special will outdo what we received in Tec #1000 last year. I would also hope as we come out of this grand issue that Tomasi can continue building Batman in line with the rest of the Batman Universe. We shall see in three weeks.