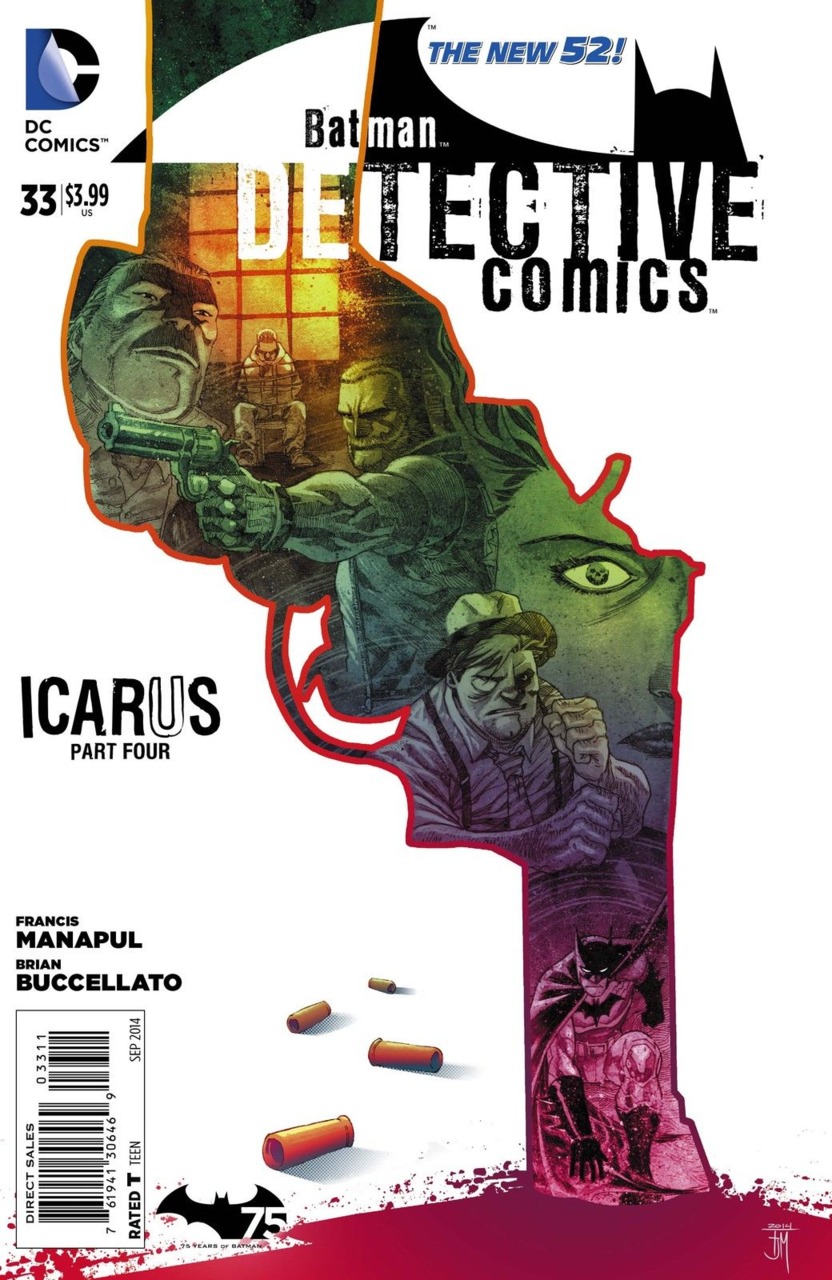 Detective Comics has been one of my favorite comics since Francis Manapul & Brian Buccellato took over. The focus on the actual detective aspect along with Harvey Bullock headlining the book makes it feel like an episode of the Animated Series, blended with the Arkham games.

The art continues to be amazing, and the panel layouts are freaking ridiculous. I really like how they, at times will overlap a character over two different panels.

We pick up right in the middle of the situation we were left in last issue. Batman is right in the middle of a stand off, with the Squid being shot. His brother takes his gun, and begins the all out brawl. Batman begins to take everyone out, when the SWAT team appears. Since this is taking place during Eternal, they want to take Batman in. Batman uses smoke to hide, and escapes from the police force.

Bullock is beating up Lester, who they picked up last issue. Bullock gives us some backstory on himself, about him being in boxing back in the day. He gets Lester to confess who hired him, Congressman Sam Young. A woman in the force, named Maggie gives Bullock a lead on the missing cargo. They find that they were storing radioactive material, and they were most likely being hid at the abandoned Kane Power Plant.

Batman is at the Kings of the Sun's hideouts. Using detective vision, he's able to see that they are keeping tabs, and following the Aguila's especially Annie. We go to Annie's place, where she receives a knock on her door. She answers to find the leader of the Kings of the Sun, who has the one of the Squid brothers in custody, telling her that he killed her mom. He also tells her that he is her father, and he gives her his gun, to kill the man.

Batman arrives at the same conclusion as Bullock on the Kane Power Plant, and meets him there. Batman is suspicious of Harvey and what he did to his partner six years ago. He accuses Harvey of killing him, and they get into a fight. At the same time, we see someone who is high on Icarus, as they explode behind Batman and Bullock.

This has continued to be awesome. I live that they have created tension between Batman and Bullock. We see what it looks like on paper, and what Batman believes. But if you've read the right comic, you also know Harvey's side of what happened. Why things went the way they did. Also the twist with the Kings of the Sun leader being Annie's father… I did not see that coming. We continue to learn more about Harvey, who we don't really know much about. The art is still freaking gorgeous. We get an annual at the end of the month, and then we get the conclusion of this story next month. Sweetness!