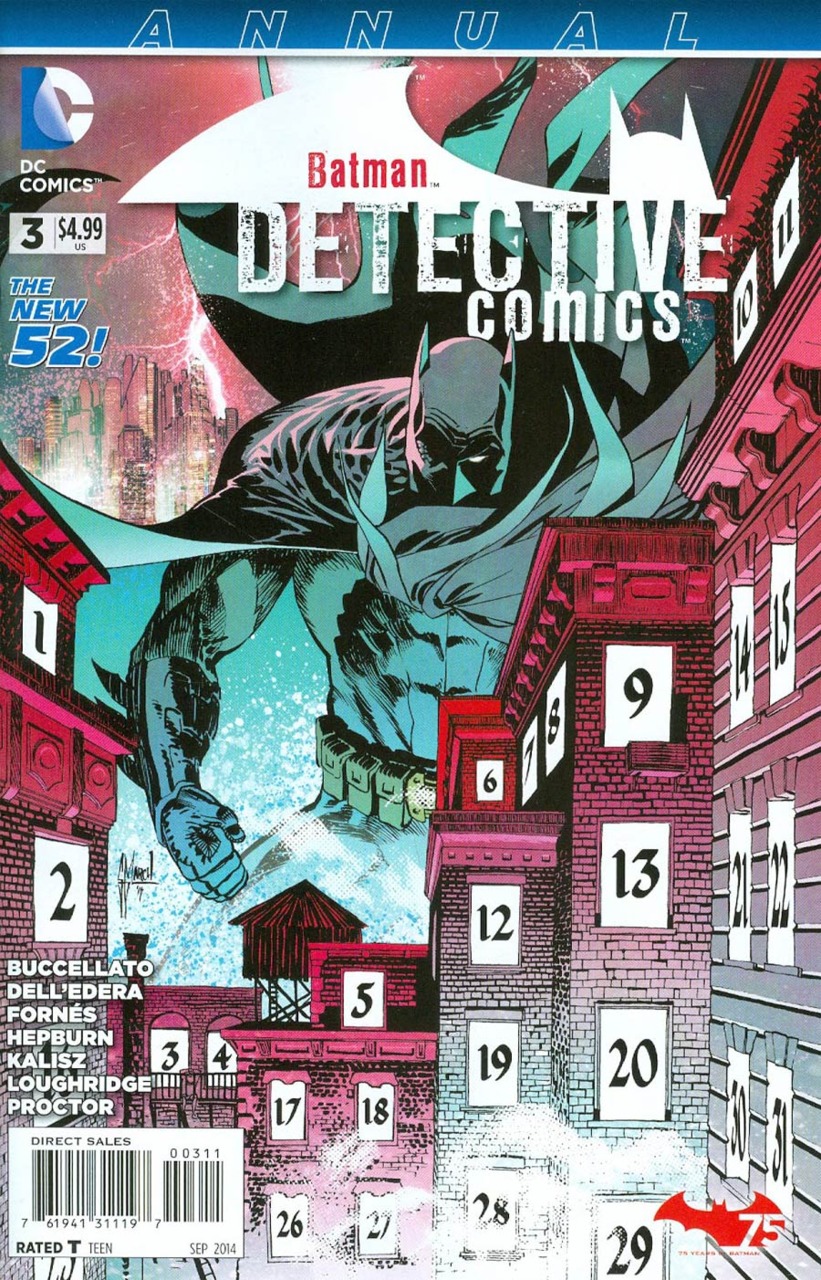 As you open up the pages of this issue, you may be upset that Francis Manapul isn’t doing the art… But hey, you can’t expect that guy to be that awesome, AND do every single issue.

While reading this, I had trouble (until the end) deciphering when this issue was taking place. It ties into the Icarus story, however, it isn’t necessary to read if you are reading the current Detective run. There are ties to new characters and old. But, I found myself not liking how the older characters where portrayed in this story. I felt Brian Buccellato didn’t capture the voice of pre-Calandar-Man, Julian Day.

There was also another layer added to Annette that I didn’t necessarily care for here that I will get into later. Another thing that may bug you, is the three different artists in this book. Now, I liked all three of them, and thought they all did well here. I would prefer them get just one artist, but I thought they did well in breaking it up into three different stories, & letting each artist cover one, so that it has a more cohesive feel. Although, my favorite of the bunch was Werther Dell’Edera, who was completely new to me, but I felt like his style fit this book the best. I enjoyed Scott Hepburn’s stuff, but I think he’d be better on a book with a lighter tone.

6:54 a.m. – Annette & her boyfriend are riding their dirt bikes in a construction site in Gotham. Annette beats him in a race. They mention that Annette’s mother doesn’t know that he is in Gotham, and she doesn’t like him because he introduced Annette to drugs. They are both clean, now, and they decide to elope back to New Orleans the next day.

4:40 p.m. – Annette’s boyfriend is watching over a stash of Icarus for the Kings of the Sun. He gets a call from Annette, and he pulls a needle out of his pocket…

5:06 p.m. – Batman is beating up a gang that has gotten ahold of Wrath’s weapons. Batman is trying to get them to tell him where they got the weapons, when a boy named Aden tells him that they are at the salt yard. Aden knows this, because he followed them to find a gun to protect himself from his abusive father, who also forgot his birthday…

6:10 p.m. – Julian Day is meeting with the Squid and his brother. The Squid is putting Julian over his brother, and the brother isn’t pleased. Both he and Julian get out, & head to a bar. Julian talks to him about creating an identity for himself. The brother smarts off and Julian punches him in the gut & heads to the restroom.

6:45 p.m. – Bruce is waiting in the bathroom & uses the E.M.P. mask to disguise himself as Matches Malone. To get to Julian Day. Malone asks no questions & starts a fight in the restroom. Julian is Aden’s father, and Bruce is lashing out because Damian is still on his mind. Because he forgot his son’s birthday, Bruce tells him to buy a CALENDAR. The Squid’s brother finds Julian knocked out in the restroom, and calls a buddy to prove himself to his brother and to Julian.

9:10 p.m. – Annette’s boyfriend is calling her back. He’s high on Icarus. She’s scared because of him falling back into his drug problem, and then even more so when some thugs show up. He has to leave to defend the drugs. It’s the Squid’s brother & friends. Her boyfriend storms out on fire, but they shoot him & kill him before he is able to overheat & explode. Leaving Annette on the phone, crying.

9:35 p.m. – Batman appears at the salt depot, rigs the place to blow and buries the place in salt.

10:11 p.m. – The Kings of the Sun meet with the Squid, upset for ambushing their drug stash. The Squid has no idea about it and wants to repair the damage done. The Squid’s brother puts it off on Julian, and the Squid hires someone by the name Big Bastard. We’ll call this guy BB.

11:18 p.m. – BB has Aden at the Gotham Rail Yard, surrounded with soldiers, until Batman comes running at them full speed in his mech-suit from Court of Owls. He takes them all out, and uses a magnetic pulse to take BB’s fancy gun away from him, & he easily gives up.

The next day – Bruce has Aden sent to Elena’s shelter for women & childeren, catching us up on why Bruce wanted to do business with this woman at the beginning of #31.

With how consistent Detective has been recently, this may be the story we deserve, but not necessarily the one we needed.