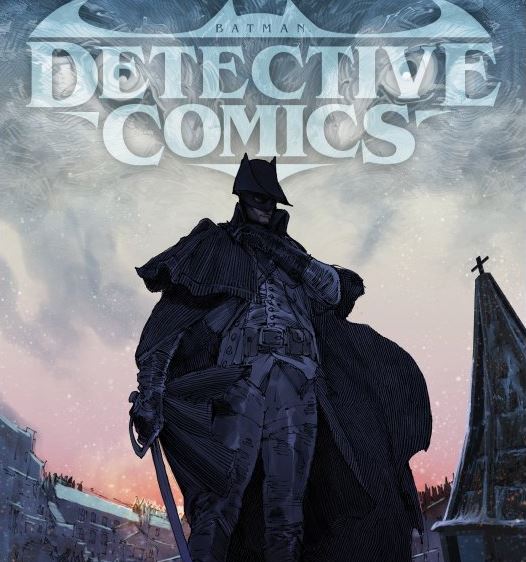 Overview: A tangled tale of Gotham’s Revolutionary War days is told in Detective Comics 2022 Annual, and the pattern the Orgham family attempted to weave into the town from its beginning.

Synopsis (spoilers ahead): As Detective Comics 2022 Annual begins, Orgham agents Gael (the werewolf) and Shavhod (of the strange eyes) walk through the ruins of Arkham Asylum, their family’s new purchase, and they speak of their queen Dariah’s plans within plans. Gael says he was alive and present at Gotham’s founding centuries prior and the raising of the church, which became Arkham. They dig up a glowing artifact Gael buried in 1776, and the scene flashes back to that time.

The settlement of Gathome is rocked by violent deaths, which a witness says are a werewolf’s work. Pastor Ichabod Kraine preaches that the wolf attacks because there is no church and the town witch. Garret Jardin, an older man, attacks Kraine to protect Aiyanna, the “witch” (an Ojibwa medicine woman), and Kraine says his benefactor, Lord Ethaniel Orgham, has come to pay for a church if the town is cleaned up.

At Aiyanna’s home, Joe Proctor accuses her of being a witch and threatens to burn her. War veteran Creen Pearce violently disperses the mob, and Aiyanna tends to his wounds after.

Bandit lord Darcey Hunt, with a scar across half his face, preaches his own gospel of honest thievery against the coming deception of Commerce.

The lord of that Commerce, Lord Orgham, meets with Pastor Kraine and merchant Pebblecroft, revealing that his servant Gael is behind the murders, the trigger for his plans, creating fear, which will lead to power through the church and Commerce, using the glowing artifact called the “reality engine” to manipulate the “patterns” so Gotham will be stuck in those cycles for all time, as well as murdering Jardin, Orgham’s rival for power.

Pearce takes the son of the murdered Wainwrights (the last scion of the family which founded the town) away from Gotham to give the boy peace, but the wagon driver, who calls himself Mordecai (among other names), urges him to stay in Gotham and fight for what is right.

Joe Proctor and his mob return and capture Aiyanna, plotting to burn her, but Pearce returns on a burning wagon, masked as a fearsome Bat, and defeats the mob. Aiyanna says she called his name, Barbatos, and they plan to fight the robber Darcey Hunt by driving him into Aiyanna’s forest, which will destroy them with her magic.

Pearce lights a fire to drive bats into the town to terrify the bandits. Hunt is about to murder Jardin, but Pearce Bat-Man saves him.

In the present, Gael says that the reality engine accidentally caught the Bat-Man in its pattern, destroying the Orghams’ plans, so they plan to remove Batman from it forever. We see Queen Darieh Orgham opening a box with a severed tongue and two eyeballs, and Gael and Shavhod lay their plans to destroy Batman and retake Gotham for the Orghams.

Analysis: Ram V pens his first annual for his Gotham Nocturne saga in Detective Comics, sticking with the musical theme of his arc titles by calling this chapter “Motif.” Using the framing device of the centuries-old werewolf Gael telling the tale of the Orghams’ history with Gotham, a huge amount is revealed about what Ram V is doing.

The heart of the tale is the idea of the unbreakable cycle set into the city (and possibly making statements about America, or Western Civilization, though more on that a bit later) by the Orghams, and the place Batman has in those unending ripple patterns as a force of resistance against their deception and power-hungry plans. If viewed as motifs, like the title of the issue, images like the Wainwrights, slain in front of their grieving young son, the two-faced bandit, the forces of madness coalescing around a building, a woman with red hair and strange power over the plants, the sinister forces of powerful, wealthy men plotting to oppress those beneath them, and above all, a man in black with a bat symbol upon his chest fighting evil – Ram V has woven an evocative, poetic piece of prequel to the Batman mythos. It would be fascinating to see how much this flashback ties into various pieces of Grant Morrison’s The Return of Bruce Wayne, though that exploration must be done by other pens.

The pieces put in place by Ram V in Detective Comics 2022 Annual alone are intriguing, though somewhat frustrating. Gathome Settlement is a strange blend of Sleepy Hollow (the corrupt pastor Ichabod “Kraine” instead of the weedy schoolteacher Crane) and The Crucible (Joe Proctor from Salem town persecuting supposed witches). The idea that the “war” is over in 1776 when it would go on for seven more years (though perhaps it wouldn’t touch New Jersey as much?) is very odd, as is the image of a pale-skinned, red-haired Ojibwe woman shoehorned into the Poison Ivy role.

The “evil Commerce” is seen as an actively harmful thing, instead of a neutral force that has both positive (education that could stop such ignorance as Proctor’s…though to be fair, Aiyanna DOES have actual magical powers, and Ram V sidesteps the problem by unrealistically having her only use them in selfless and noble ways, unlike the Poison Ivy of today, though that does fit with the frustrating fanon-influenced “Ivy did nothing wrong” narrative that’s been infecting Ivy for the past decade) and negative (empowering men without morality, like Lord Orgham, to murder and terrify to get their way) impacts, presents a fairly tendentious plot point that asks a question then stacks the deck ridiculously to one side to “prove” its point. It will be quite interesting to see what Ram V does with this theme in his larger story of Gotham’s founding, especially as Tom King is pursuing a somewhat similar theme in his Gotham City: Year One, looking at the impact of the Wayne family’s manufacturing business on the poor black population. The frustrating lack of subtlety of the cliched Kraine and Proctor characters contrasts with the powerful repeated images of a Revolutionary War era Batman reflection of today’s struggles.

On the art front, one of the two main artists for the run, Rafael Albuquerque, provides the framing device sequence art with his recognizable dark flair in Detective Comics 2022 Annual, while Christopher Mitten draws the historical flashbacks with somewhat muddy but nonetheless evocative linework. Hayden Sherman provides a few flashback pages for this oversized issue, while veteran colorist Lee Loughridge does an excellent job providing atmosphere and interest through colors throughout, matching each artist perfectly.

DC decided to only print one cover for this annual (though I’ve been informed that this policy is not universal across all of its annuals, but it has been for all the annuals I’ve bought, which perhaps says more about my annual buying habits than DC!), by Evan Cagle, the same artist who’s been providing the main covers for Ram V’s run. Featuring a colonial-era Batman, holding a sword pointed at the ground in a snowy town, it is intriguing, though rather a static piece, with very lovely coloring.

Though constructed of strange, conflicting, and often tendentious materials, Ram V’s first Detective Comics Annual still has a haunting power, as well as revealing some of the mystical underpinnings of his plot for Gotham Nocturne. Strong, though not particularly stunning art by the trio of artists rounds out a solid entry in the ongoing tale of Batman vs. the Orghams.