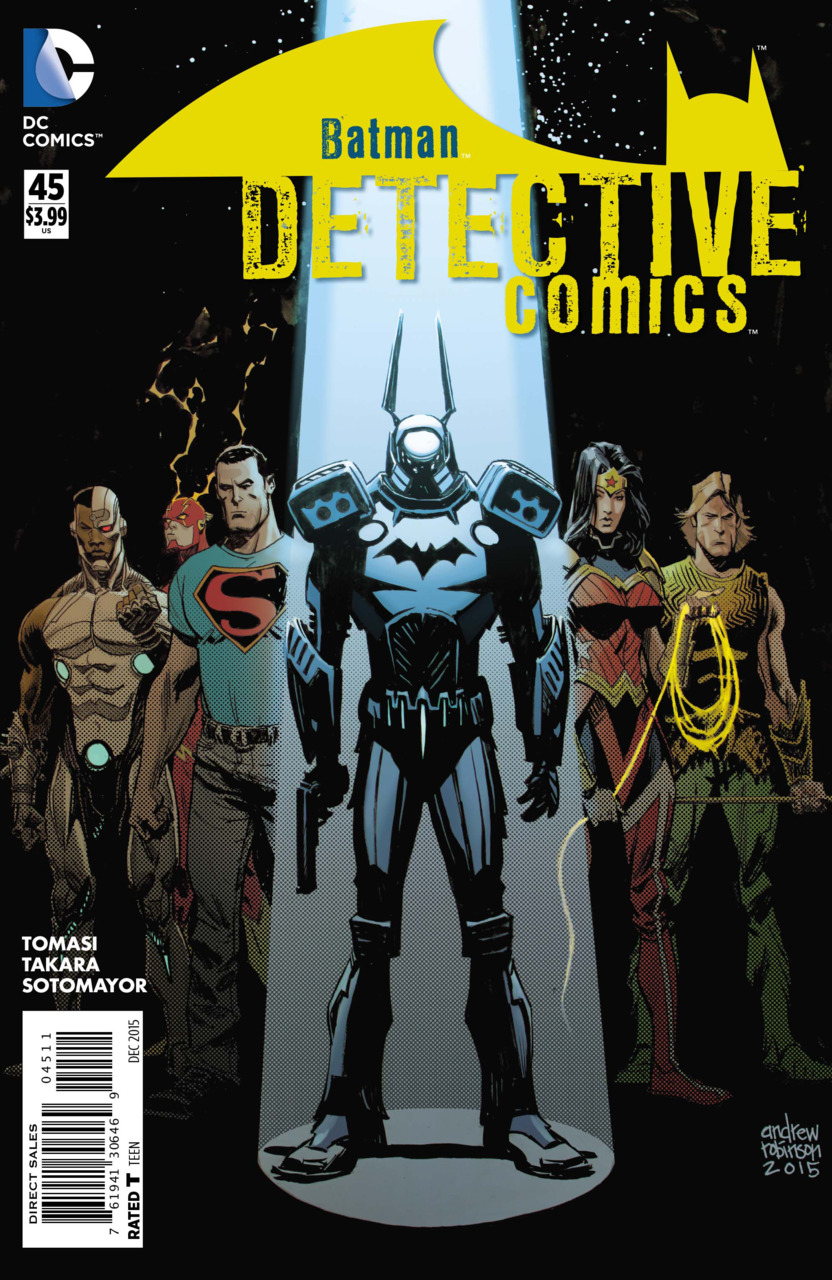 So when DC announced that Peter Tomasi was taking over Detective Comics, I got pretty excited (after grieving over Manapul and Buccellatto, that is). And when I heard that Marcio Takara was doing the art, I was intrigued. I’ve never seen the guy’s art in a comic, but I have seen his character designs on the Internet as well as the stuff he was posting on Twitter. His art is very different from what we’ve come to expect from these books… and I like it. It has a more playful tone to it. And when you throw the entire Justice League in the book, it really makes each character pop because you can see the difference in the characters from their facial expressions, body language, and even in the coloring.

It’s also neat to see the Justice League in their current form. A depowered Superman, a covered Wonder Woman, surfer Aquaman, a slimmer Cyborg, and the sleekest looking Flash costume yet. Takara’s style reminds me of Dustin Nguyen, but has its own flare to it that is raw, unique, and fun to read all at the same time. Tomasi builds the foundation for his story here, but heavily leans on where each character is at right now. There have been lots of changes, and we get to see them all here. I would recommend getting this book. Tomasi is a solid writer, and this looks like a good pairing. I hope it lasts.

We open in India, where a Cricket game is taking place, when suddenly — SENTIENT WATER DROWNS EVERYBODY AND TAKES THEIR EYEBALLS!

In Gotham, Bruce is at the Manor checking out photo albums with Alfred providing stories for each one, until the Justice League show up at his front door! They ask Alfred if Bruce can come out to play with them, but Alfred tells them how he already told them – Bruce hit his head, and he’s not allowed to play with them anymore. So Wonder Woman asks if she can go check on him. She uses her Lasso of Truth and asks him questions to see if there is even a hint of the old Bruce. He even tells her that he trusts people until they give him a reason not to – ew! She gets nothing, and the team leaves the Manor, telling Bruce that he just provided Waynetech for the League, and Bruce tells them that his is sorry for their loss (meaning Batman).

We catch up with Gordon, who is all sorts of beat up. He gets dressed and heads out to a local baseball game to enjoy his first night off in weeks. However, Batman doesn’t really ever get a day off. The Bat-Blimp radios in and tells him that they are being attacked by a group of fighter jets. In Iron-Man-like fashion, the suit attaches to him and he takes off. He pulls a pilot out of the jet to see that there was something attached to his helmet. The Justice League show up to help Gordon, and they save the day.

Later, Gordon meets up with the team to talk membership. He doesn’t feel that he would be much use to them, but they assure him that they need a Detective. He reluctantly agrees, and Cyborg immediately teleports the entire team to a region covered in snow, AND THE SKELETAL REMAINS OF A GIANT…

This comic was really fun, and had an old school feel to it. I highly recommend you give it a try. Plus you get to see the Justice League in all their current/weird glory.