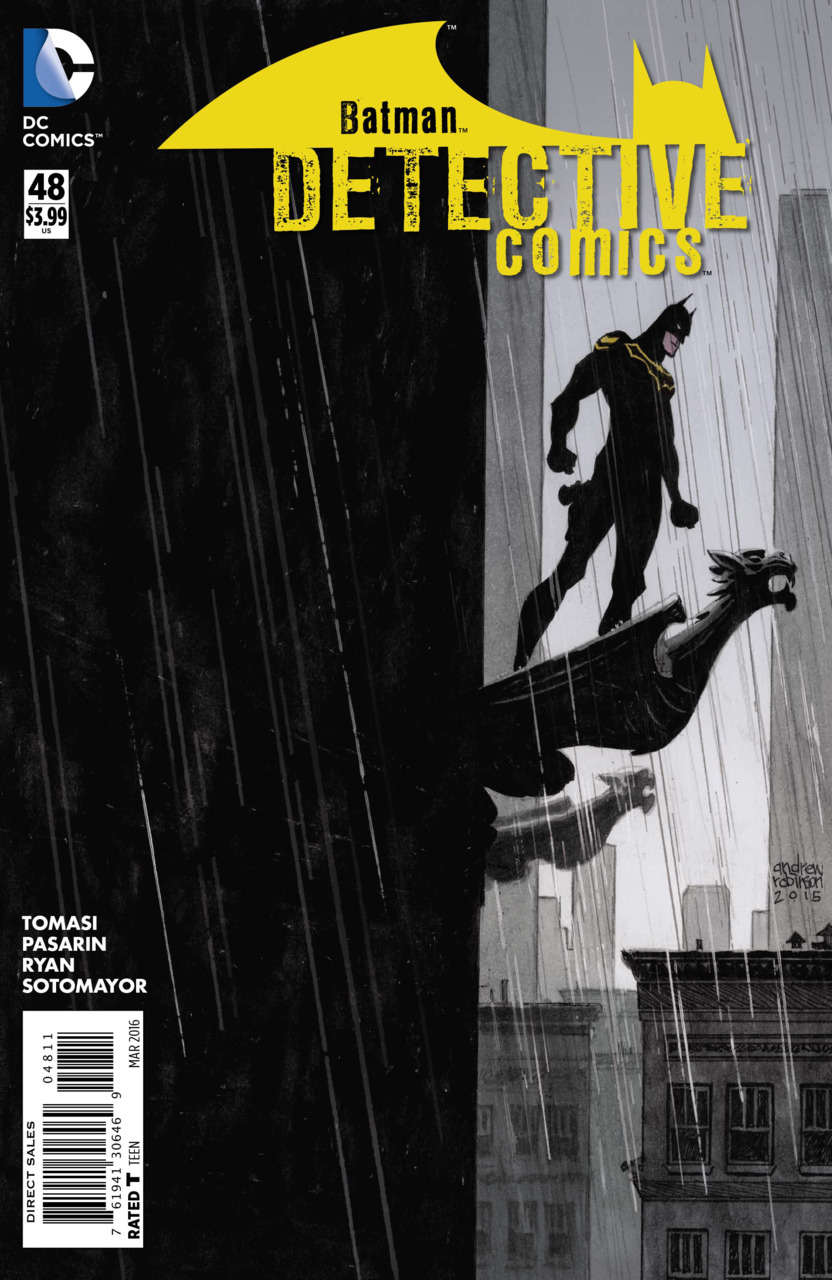 Peter Tomasi is back on Detective Comics this month, and this is his best issue yet… Now, keep in mind that this is only his third issue, but my statement still stands. Tomasi gives us moments that confirms to us who love his writing, as to why we think he’s so great. We get to see the amazing family moments that Tomasi does so well. He also has a great voice for Jim. And he also does a great job on making the villain very creepy, and at the same time — interesting.

I am still a bit disappointed in how DC is handling the title that made them what they are today. It just feels as if it doesn’t know where it’s going —  it’s direction-less. DC doesn’t seem to know who is writing it three months out — or even who is doing the art three months out. Marcio Takara was scheduled to do the art this issue, but – again – is nowhere to be found. I find this to be a problem, and I really hope DC gets this figured out very soon. It’s not as if these troubles are hurting the book so bad that it’s in danger of being cancelled… It just doesn’t reflect well on the company as a whole.

Fernando Pasarin is on pencils this issue, and he does okay this issue. I’ve never really been a huge fan of his art, as it’s more of a DC “house style” where its very detailed, gritty art. He goes for a more photo-realistic look, but his action shots sometimes look stiff. What bothers me more, though, is the panel every other page or so where the anatomy is off so bad, it takes me out of the moment. Now I’m not one to say that sequential art work has to be realistic looking, as I tend to believe an artist personal style and storytelling to be more important than anything being “accurate”. However, if your style relies on that factor, then you must master anatomy and perspective. In short, this art isn’t pleasing on the eye at times, but I’ve seen Pasarin’s past work on Batgirl, and I do feel like he has improved.

Matt Ryan is on inks. I’m not familiar with his work previous to this, but I feel like he did an exceptional job. He knows when he needs to fill in some space with some black inks, and he knows when to back off and let the colorist do his thing…

(Segue) Chris Sotomayor is on colors again this issue. Last month, I questioned as to whether he was adding an effect to the blacks, or if that was the Steve Pugh… I have found that it was, in fact, Pugh. Sotomayer does a great job in capturing the essence of the moment through the colors. He changes tones throughout several times depending on the moment, without loosing his signature to the book itself.

Wes Abbot is the letterer this issue, and does a great job in giving Pasarin room to tell a story, and not overcrowding the page. He also maintains an even, easy to follow flow throughout the issue that helps you to keep good timing with the events taking place.

Recommendation – I’d recommend you jump on with this issue. Hopefully you have some idea as to what’s going on in The Batman Universe right now, but you don’t need to know everything. Tomasi gives you everything you want to get to kick off a new story arc.

We open with an unknown character loading a flintlock pistol while speaking in the old English of our forefathers that makes my head hurt trying to decipher.

Meanwhile, Jim is creepily peeping on various families throughout the city, and reminiscing on his own. He decides to call up Barbara as she is beating up a group of thugs to give an older woman her purse back. She lies to him, saying she’s about to see a movie with some friends. He lies to her, saying he’s about to get a pizza and watch a football game. This may be a continuity issue, as I don’t understand as to why he is lying to his daughter… He did tell her that he is the new Batman, but this isn’t a huge issue. Jim hears a unique sounding gunshot, and begins running toward the source of the sound. On his way there, he slips and nearly falls off the rooftop, only to catch himself. He’s trying really hard to improve his skills without relying too much on the suit. He arrives in an alleyway to find a George Washington lookalike with two bullet holes in his body. The smell of gunpowder is still in the air, so Jim realizes that the killer is still close, and that he’s made another mistake — he’s walked right into a trap. The killer takes another shot, striking Jim in the back of the head. Gordon manages to get a few shots of his own off before he collapses to the point to where Julia has to make a drop to save him.

At the Woodcrest Cemetary, a figure makes his way into a building on the grounds. He wears Washington’s face, but takes it off, as he cleans up his wounds. He has a wall of faces… of victims or aliases, I’m not sure. He walks over to a man who he has tied to a chair. He begins shaving his face, prepping him for his next historical reenactment…

Jim and Bullock look over George — he was a Gotham City firefighter with a squeaky clean record. A weird thing Jim notices — George has had a surgical procedure that has left him with a missing thigh bone. Bullock also lets Jim know that the bullet that struck him in the back of the head wasn’t meant to kill him — it was a rubber bullet. Jim also does the disappearing act just for fun.

He races to the rooftop just in time to catch a ride on the blimp. The team has gotten a report of someone tangled up on the rooftop of Wayne Tower. They make it there to find a NASA astronaut tangled at it’s peak.

Closing thoughts – I really enjoyed this issue. Tomasi has such a good grip on the family aspect, and Gordon is a good character to use that on. Also the more grounded aspect of this comic was a welcome improvement over his last installment.