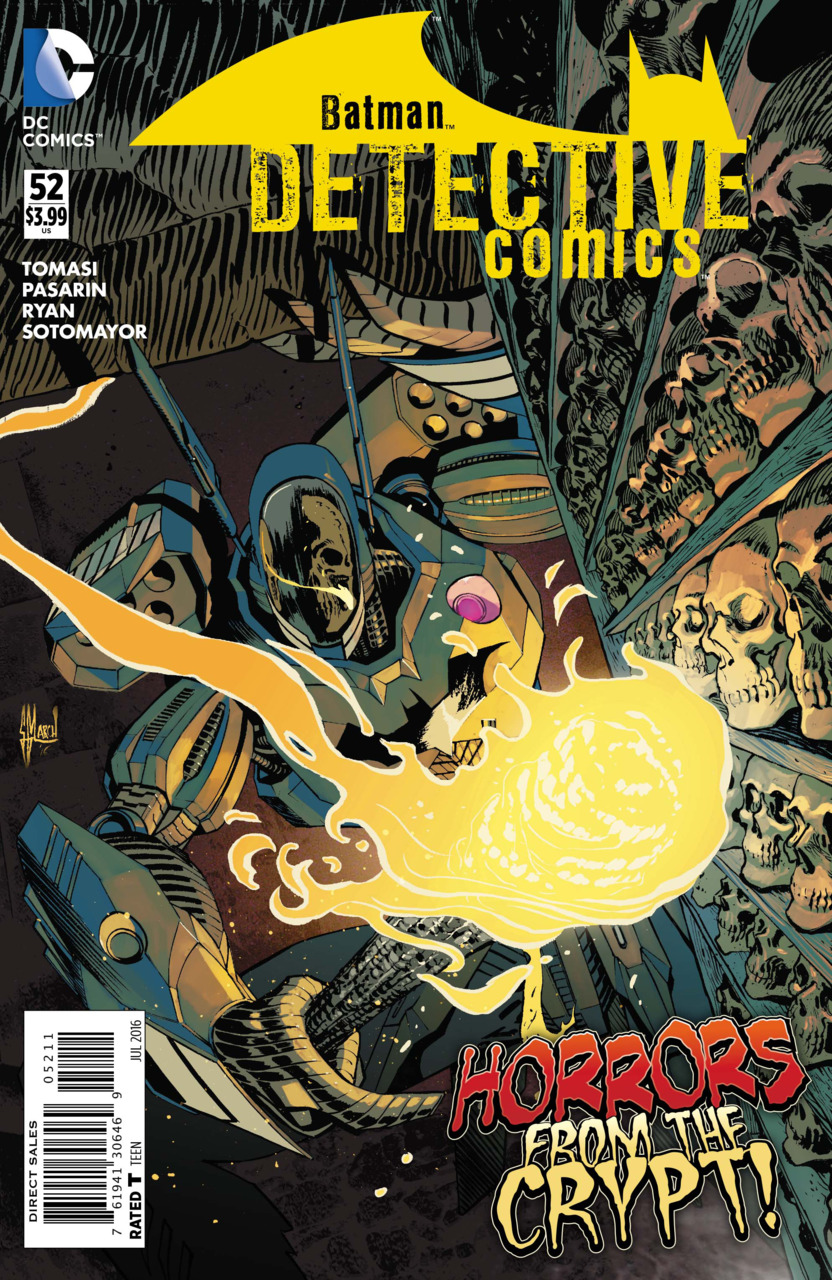 Breakdown: Peter J. Tomasi delivers a solid script, this issue… I feel like you guys should start a drinking game for every time I say “solid”. He gives us a basic detective story that was better in the smaller, more personal moments (which Tomasi is perfect at) but we don’t get much of that here. I look forward to what is coming in Rebirth… Again, this issue was solid. (sip)

Fernando Pasarin was back to being consistent here. Which is weird, to me that he goes back and forth from one issue to the next… Maybe it’s a time issue or something, but there are just some times where his anatomy is just wrong. Matt Ryan’s inks were good here. I feel like he continues to get better, but I did like the first page in this issue from him the best. He laid the inks on pretty heavy, and it almost reminded me of some of Yanick Paquette’s work. Chris Sotomayer’s colors are very bright despite most of this issue taking place in the dark underground. He uses the colors of the flame to shad almost everything except for Gordon, who is in his bright blue suit, which helps him to stand out. I still like the colors and the texture he adds in the desert scenes the best, but they don’t look as good as they did last issue. Wes Abbott does a good job lettering, but there were parts of Jim’s dialogue that were difficult to read… And that’s not his fault, it’s just the font they’ve been using for the robo-batsuit. So as much fun as I’ve had with Jim as Batman, that will be one thing I won’t miss.

Recommendation: If you’re waiting for Rebirth, or are on the fence about this series, I’d just wait. There’s nothing spectacular about this series right now. And I’m not bashing it or anything, I’m just saying that if I know money is tight, I’d be spending it elsewhere. If you want some Tomasi stuff that’s really good, go read his Batman and Robin, or the stuff he is doing right now in the Superman titles.

Synopsis: We pick up from last issue, with Gordon recounting his days in the marine corps, as they stumble upon a cult of killers. He remembers having to kill them all, just to survive…. Just then, Gordon’s old buddies finish digging him out of the sand he got caught up in last issue. Jim calls in a package from Julia, and it arrives about the same time. He opens it up, and gets in his robo-batsuit.

He and the corps. make their way down into the cavern below, when they find some fellow soldiers – some alive, some dead. Gordon takes their tags, and continues on to find as many as possible before leaving. The group is attacked just before they make it into the main room. Up a flight of stairs, is Amun-Set, who is being wrapped in the strips of skin the group has been removing from their victims, and seems to be preforming some ritual. Gordon fights his way to the stairs, and just as he starts going up them, Amun-Set is ready. He seems to be stronger, faster than the average man, hurting Gordon through the armor. Gordon distracts him by throwing some batarangs at him, buying him enough time to torch the place, burning the shrine they have built. Amun-Set makes one last attempt, this time trying to take Gordon down with him by grabbing his foot and pulling him back into the fiery room. However, the marines show back up to fill Amun-Set with holes, return to the surface, and bury the cavern in the sand.

Back in the States, Gordon goes to the houses of the fallen soldiers, to deliver the bad news to the families.

Closing Thoughts: A decent two-part story, but the last page of the comic was by far the most compelling. I just wish more of Tomasi’s run on Detective had more moments like that.