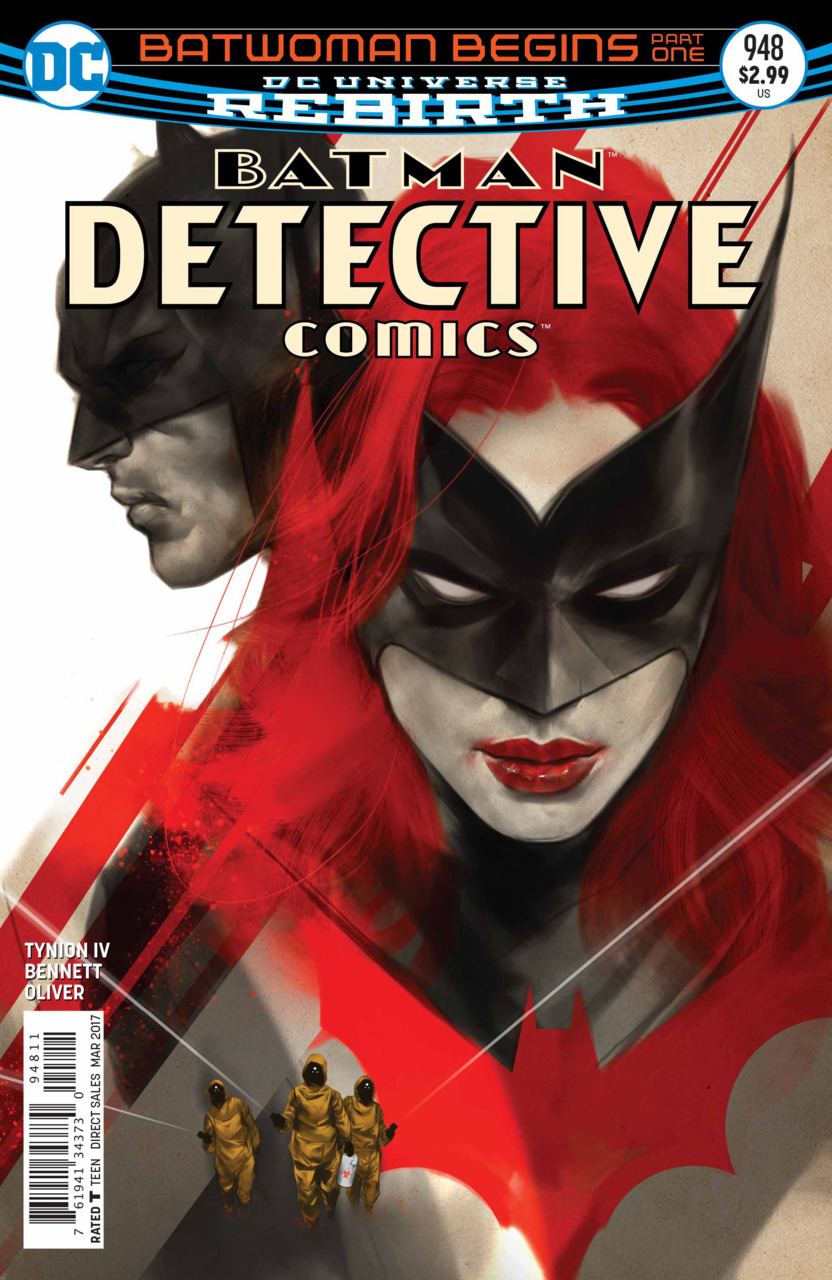 In Brief: As “Batwoman Begins,” Kate and Bruce deal with the aftermath of the Monster Men and the Colony’s attacks on Gotham.

Summary (Spoilers): Two years ago, Batwoman is following Batman, guided by her father. Though she loses Batman, Jacob is proud of her, and pushes her to figure out what Batwoman offers that Batman doesn’t. In the present, Kate watches her father in Bat-custody. While the team trains, she and Batman walk together to the Argus cleanup effort from the Monster attack. The venom left in the monster bodies is turning corpses and seagulls into hybrid monsters, as scientist Victoria October explains to the pair.

October tells Batman and Batwoman that someone broke into Argus’s facilities and stole three canisters of the venom waste. Batman immediately recognizes the Colony’s work. The man from the security footage, Simon, lands on top of the Belfry, and contacts Jacob Kane by overriding the security. Though Jacob insists that he does not want extraction, Simon proceeds, until confronted by Batman and Batwoman. He proclaims that when the Colony needs its most dangerous work done, they don’t send an army, they send him.

In Depth: James Tynion is joined by Marguerite Bennett for a breezy part one of a two part arc, leading into Bennett’s solo Batwoman title. Guest artist Ben Oliver provides solid pencils, though there’s a sense that this issue has more style and flash than character movement. The best moment was definitely the flashback, showing Jacob and Kate’s relationship, which if Tynion keeps true to form, will lead to a solid conclusion next issue in another flashback and connected to the relationships in the present.

After such an excellent look at the team dynamics and the changing nature of Batman’s mission in Gotham with the Bootcamp last week, the lack of the team was felt dearly, since so much of the issue was devoted to action or exposition. The two new characters help make up the difference – Dr. October has a snazzy design, and Simon, the elite Colony soldier, has an awesome closing line – but hopefully when the oversized (Tynion has promised 38 pages of story content) #950 rolls around next month, with no fewer than three stories (one focused on Cassandra Cain, one on Azrael and Batwing, and one on Batman himself), the team dynamic which makes this title so great will be back in full force. It’s even possible that the team will help fend off Simon in the next issue (though given how skilled and dangerous he seems to be, it might be similar to #947, where he takes them all down quickly so he can face Kate and Bruce alone).

Oliver’s art is really slick, with cool and dark coloring and really appealing linework. Some of his layouts recall the inventive work by Batwoman artist J. H. Williams III. However, though his action sequences and design are excellent, he doesn’t quite have the sense of details and depth as the regular artists on Detective, probably adding to the sense that the story isn’t quite long enough for the pages given. Nonetheless, the work is very attractive.

Pick up/Pass? Fun – worth some time.

In Conclusion: A fun, dark start to Batwoman’s solo series, drawing expertly on the continuity of the series for conflict.