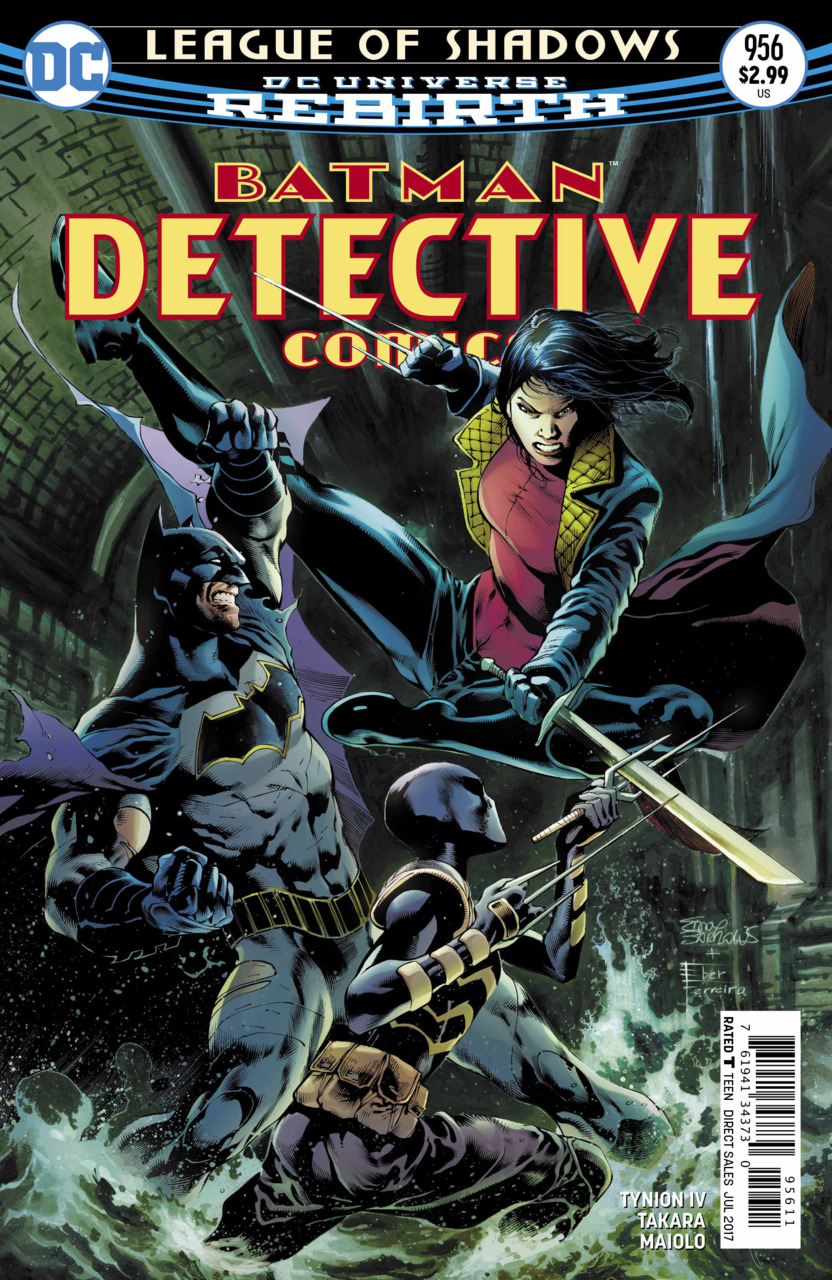 In Brief: Cassandra Cain and Lady Shiva duel, as the the titanic forces around Gotham rage around them.

Summary (Spoilers): Beneath Gotham, Cassandra faces her mother, Lady Shiva, with her team behind her. Shiva claims that though she does evil, she does not have an evil purpose, and will never yield.

Above, in the Colony airship, Jacob Kane calls his wife after the months he spent in Batman’s captivity, asking her to leave the city for her own safety. The General, Ulysses Armstrong, is generally obnoxious about everything, then reminds Kane of the nano-napalm they’ve launched into the tunnels. Jacob vows that Shiva will not walk away from killing his daughter.

As the team and Cassandra battle Shiva, Kate falls when the assassin reopens her stab wound, and Batman orders Clayface to take her to safety. Shive continues to attempt to persuade Cass that killing is the right thing to do, but her daughter remains strong in doing the right thing. Shiva believes that destroying Gotham will weaken Ra’s al Ghul, who has tied up much of his wealth in the city, and allow the world to reach a utopian state. She starts the nuclear countdown, and Azrael and Batwing head off to defuse the bomb.

Kate and Clayface encounter some of the ninja Cass knocked out, and Clayface is forced to disguise himself and Kate as ninja themselves to sneak out undetected. Jacob Kane and Ulysses continue exploring the cave, finding the unconscious shadow ninja, and Kane orders the swarm further in before igniting.

Cass takes the upper hand in her duel with Shiva, explaining in short, powerful sentences that choosing life is the strongest choice. In the airship, Kane sees his daughter through the nano-swarm’s cameras, and orders them back. Cass demands to know why Shiva is attempting to destroy the city, and we flash back to a meeting between Shiva and Ra’s many months ago. Shiva has discovered something about Ra’s plans that horrifies even her, but before she tells Cass, Ra’s appears in the tunnels and shoots her, apparently fatally. Batman restrains Cass, as Ra’s makes a deal with Batman to remove Shiva’s body and the League of Shadows. Batman agrees, but lets the villain know that his new knowledge of Ra’s magical manipulation of his memory leaves unfinished business between them.

Shiva tells Cassandra something we don’t hear before dying, and the two sides retire.

One week later, Kate visits Bruce in the Belfry to remind him that they’re taking Cass to the ballet. Azrael, Batwing, and Clayface patrol the newly chaotic streets, and Batman knows they must find Jacob Kane again, but first, they must explore the ways of magic to discover how to defeat their ancient foe.

In Depth: Detective Comics is the shining jewel of DC Comics Rebirth. James Tynion IV consistently writes solid character arcs, and his rotating artistic teams provide gorgeous pencils and colors to illustrate the intense emotions as well as action his stories contain.  Marcio Takara provides thick-lined, sharp artwork, reminiscent of a less-scratchy Jock in The Black Mirror. Though his renderings of Jacob Kane and Ulysses Armstrong are a bit rough, not helped by the flat brown coloring dominating those scenes, his work with Cassandra and Shiva’s battle, often against stark red backgrounds, captures the deadly skill and intense philosophical and emotional conflict at the heart of this issue.

Though Cass and her proving her heroism take center stage this issue, all of the other characters have delightful smaller moments, from Luke and Azrael’s attempts to feel better about being outnumbered by ninjas, to Batman’s determination in the face of Ra’s urbane ruthless evil. Jacob Kane, proving he’s learned something since his willingness to sacrifice Tim Drake, refuses to go along with the General’s vicious nano-napalm to save his daughter, a move that hopefully will move him forward into his appearances in the Batwoman title.

In the end of the League of Shadows arc, it might seem that Batman’s efforts are again for nothing. Mayor Hady’s attempts to redeem himself from his corruption are defeated by Shiva’s brutal murder, and the city has gone from relative peace after the Victim Syndicate’s attacks, to barely controlled chaos. However, it’s clear that not only is Cassandra settling into the hero she will become, but Batman is starting to see the bigger picture hinted at in #950.

Pick up/Pass? As always, Detective Comics is more than worth picking up.

In Conclusion: The League of Shadows concludes with a tense conclusion, though thankfully not explosive, as Cassandra proves her quality to her mother and the world.