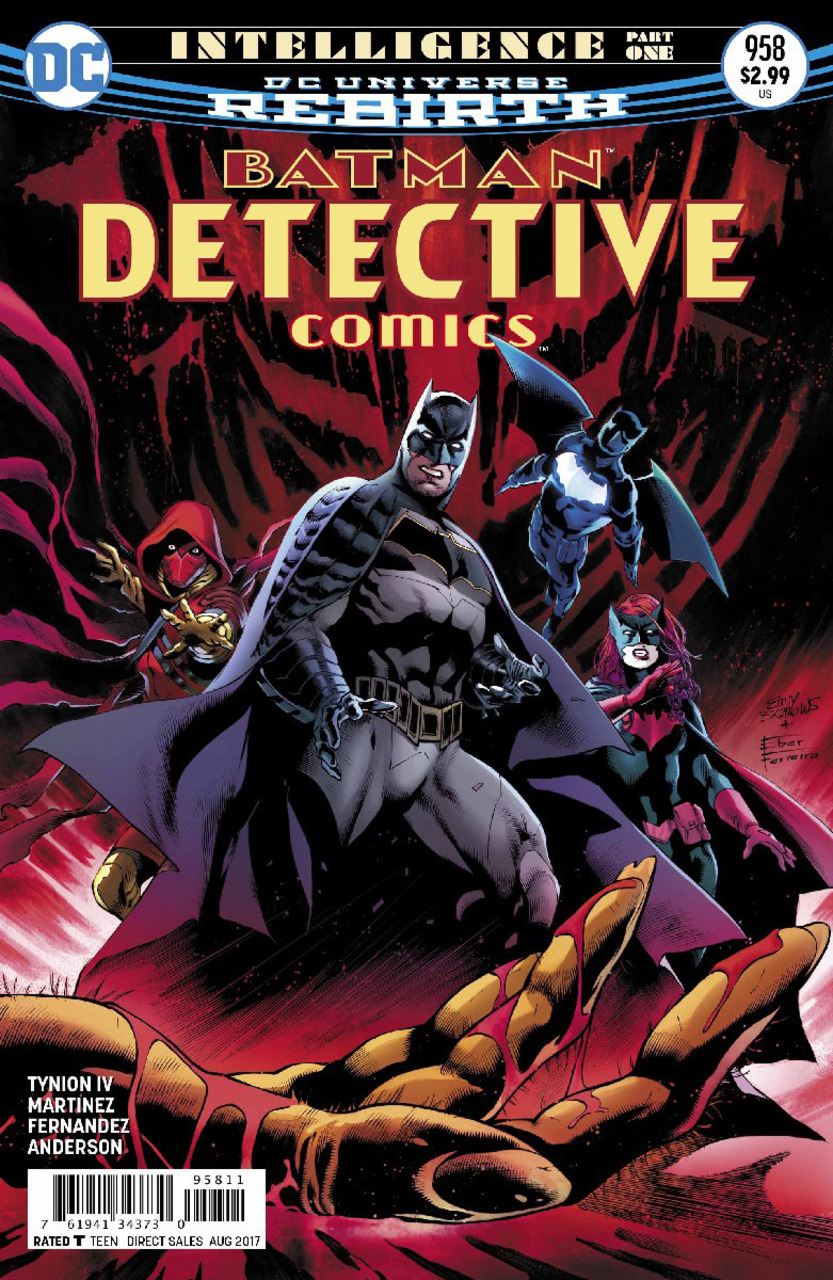 In Brief: “Intelligence” kicks off with Jean-Paul Valley, Azrael’s past crashing into his new life.

Summary (Spoilers): A bleeding hairy dwarf in a trench coat staggers towards the Dixon Center, where the Gotham Knights basketball team entertains Jean-Paul, Luke Fox (Batwing), and Kate Kane (Batwoman). The dwarf collapses at the side of the court, begging for help, and Jean-Paul asks Luke to black out the stadium lights to get Nomoz, the dwarf, to safety.

Across the city, Bruce Wayne (Batman) enters Penguin’s New Iceberg Lounge (at least the third since it was destroyed three years ago in Batman Eternal). He argues with Alfred that Batman would be better to ask “her” his questions, but Alfred insists that his appearance as an old friend is better. Oswald Cobblepot invites Bruce to a private poker game to see the performance in question, over Alfred’s objections in Bruce’s comms.

At the Belfry, Clayface and Cassandra rehearse Shakespeare’s The Tempest, giving some insight into the developing friendship. They are interrupted by the trio from the basketball game with Nomoz on a floating medical bed. Nomoz mouths off to Clayface, but is terrified of Azrael’s Suit of Sorrows. Luke mentions that he’s been studying the suit’s AI since issue #950, where he learned its secrets. Kate asks Jean-Paul about his history, since Nomoz was created by the Order of St. Dumas just like Jean-Paul – their genes spliced with animal DNA, and he was then programmed by Mother in Batman and Robin Eternal. Nomoz wakes and tells them that the Order is evil, and has destroyed the entirety of the old guard with their new robotic Azrael, codenamed Ascalon (as seen, again, in issue #950). Nomoz tells them that it has followed him to Gotham.

Meanwhile, Bruce plays against a motley crew of cons and failed thugs like Killer Moth. One odd poker player calls himself Brother Kodo, and seems terrified, but eager to experience as much as he can before a huge robot breaks into the casino, declaring it time to “excommunicate” Kodo. Before it can do much more damage, though, Zatanna subdues it with her localized gravity magical spell, and smiles at Bruce.

In Depth: After the stark mixture of thoughtful poignancy and savage brutality in The League of Shadows, and the vigorous if sad jaunt with Spoiler last issue, Jean-Paul Valley’s arc arrives with a vengeance! James Tynion IV has fleshed out the rather perfunctory backstory to the new iteration of Azrael from Batman and Robin Eternal, and continued the process of melding Valley with his successor, Michael Lane. Azrael’s triggered skills and breaking by Nomoz return from the Knightfall saga, but are combined with Lane’s sincere faith and Suit of Sorrows, though in a Valley-esque technological suit instead of melded breastplates of the previous Azrael knights. Additionally, Tynion unleashes the hinted Ascalon, the robot version of Azrael the Order has created to remove the conscience and doubt that agents like Valley and Lane introduce into their mysterious goals. Hopefully we’ll get a bit more insight into the Order’s value system and plans than the League of Shadows – though the Order may be joining the League in Tynion’s long term plot, so there’s no promise on that front.

The “B-plot” of Bruce connecting with Zatanna provides both humor and excitement, as Tynion weaves really in-jokes like the Dixon sports stadium, long-term Bat-Family characters like Killer Moth, and Penguin’s continued building woes into a sense of Gotham as complicated and full of life. Bruce’s nervousness at contacting his friend Zatanna, Alfred’s chiding, and Zatanna’s bravura entrance all form a very satisfying reveal at the end of the issue, propelling us into the arc headfirst.

Alvaro Martinez returns, with League of Shadow’s fill-in art teams, led by Marcio Takara’s thick, vibrant pencils – and much as Takara and his collaborators provided top-notch visuals, Martinez is a welcome return. Though initially the “B” artist with Eddy Barrows filling the “A” slot in profile, Martinez’s thick, clear linework, and appealing and consistent facial and design work make him a big talent to be watched. Hopefully he stays with Detective for a long time, and when he takes a richly deserved change of scenery with another title, hopefully he’ll be known as one of the best artists in the business.

There’s so much great stuff in this issue, from the classical exploration of Cassandra and Clayface’s relationship and character trajectories through Shakespeare, to references to Bruce’s technology all the way from Batman #1 in the new 52 by Scott Snyder, Tynion’s mentor. Tynion is definitely at the top of his game, and the solicitations for September indicate that his winning blend of nostalgia and modern storytelling will continue apace.

Pick up/Pass? This is Detective Comics continuing its winning streak with characters, art, and plot – absolutely a pick up!

In Conclusion: Zatanna and Nomoz burst onto the team’s lives to make sure that they won’t stay boring as Ascalon attacks.